‘Think about what you’re funding’: takeaways from the Future of Sustainability webinar 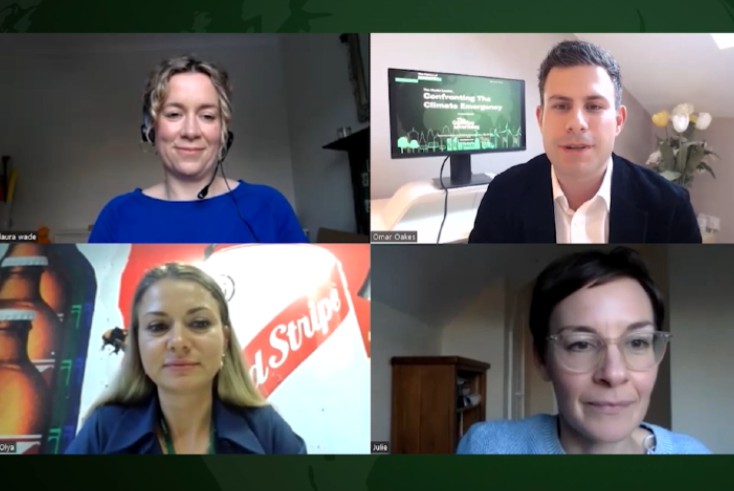 The Guardian and The Media Leader’s webinar on confronting the climate emergency covered topics including how advertisers and publishers can work to reduce their carbon footprint, and how to avoid greenwashing.

“The untrammelled free market is not going to solve the climate crisis.”

That was one of the key takeaways from The Media Leader and The Guardian‘s joint The Future of Sustainability webinar on confronting the climate emergency.

The webinar covered topics including takeaways from COP27, how advertisers and publishers can work to reduce their carbon footprint, and how brands can avoid greenwashing.

‘No improvement on what we saw last year’

Reacting to last month’s COP27 global summit held in Sharm El Sheikh, Egypt, The Guardian environment editor Fiona Harvey remarked that while it did result in an important agreement on a loss and damage fund—a fund that will obligate wealthier countries to pay for climate disaster relief in poorer countries—progress stalled this year regarding commitments to cut greenhouse gas emissions.

Harvey reflected: “The final resolutions of the conference were really no improvement on what we saw last year at COP26 in Glasgow.”

Editor: We will champion talent, sustainability and trust in media

As COP27 was underway, The Guardian led a joint editorial effort from over 30 newsbrands calling for greater urgency on policy change, and in particular the “bare minimum” of a windfall tax on the biggest fossil fuel companies.

Harvey added that such a policy would help ameliorate the climate crisis and the ongoing cost-of-living crisis at the same time. Green energy is already cheaper to produce than fossil fuels, and greater energy efficiency would be both good for the environment and for households struggling with high energy bills, she argued.

In a separate panel hosted by The Media Leader reporter Ella Sagar, Deliveroo media & commerce client partner lead Ezekiel Taiwo noted that for other businesses it will be an important challenge for marketers to figure out how to maintain and promote sustainability pledges while also offering value to price conscious consumers.

COP28 will be hosted in Dubai, UAE. The UAE is a major fossil fuel producer.

Three ways advertisers can work to remove carbon from their campaigns

In another panel, Oakes asked what the highest priority should be in terms of actionable steps advertisers could take to reduce their own carbon footprint.

For advertisers, Heineken UK’s data driven media director Olya Dyachuk said that “sustainable marketing needs to become part of the business agenda”, noting that there needs to be heightened care from brands over ensuring the agencies they use in marketing are doing it sustainably.

For agencies, Laura Wade, head of sustainability at Essence Global, recommended they work to change the market incentives around media buying by rewarding partners that have reduced the carbon in their business and their advertising platforms. This can be done, Wade explained, through trade agreements and/or product innovation.

The Guardian director of sustainability & operational transformation Julie Richards agreed it is a good idea to incentivise greener behaviours in principle, but added that she wishes she could see the marketplace change more quickly to reward groups like The Guardian for their sustainability practices.

Richards’ priority area as a publisher is to focus on simplifying the digital supply chain. She said the industry is only just beginning to understand the effect it has on emissions, arguing: “[I]f we could cut out some of the intermediaries and shorten the relationship between the advertiser and the publisher, I think that would actually cut out a lot of excess and wasted emissions.”

Richards explained that though The Guardian uses around 60 digital vendors, other unnamed competitors may use several hundred or even over a thousand. Those vendors “fire up” during every page view, contributing significantly to emissions. Studies from advertising climate network Purpose Disruptors have found that the emissions caused by the UK ad industry alone will add more than 208 million metric tons of carbon to our atmosphere in 2022, equivalent to adding 32% to the annual carbon footprint of every individual in the country.

Richards reflected that when The Guardian has asked its major vendors about their own emissions, only a “small number” were able to provide any information about them, showing a lack of measurement capability or disinterest. Richards and Wade called for a standardised methodology for carbon measurement so that the industry can move along from focussing on measurement to planning action.

Avoiding the trap of greenwashing

When prompted by Oakes to address the industry’s concerns around greenwashing, a different panel concluded that companies accused of the practice should focus less on investing in advertising and more on shifting their business model to become greener.

Harriet Kingaby, co-founder of CAN, said: “What we need is really genuine movement in the space. And then let’s talk about advertising and the renewable commitments around it.”

Sustainability is a focus, now what?

Jonathan Wise, co-founder of Purpose Directors, advised advertisers to be more aware of what the whole company they’re representing is doing, going so far as to recommend that all sustainability-related actions—both positive and negative—be included on the brief so that it is easier to weigh whether the company may be greenwashing if it puts out a certain message.

Another solution, according to The Guardian head of client sales James Fleetham, is to support high-quality, trusted publications that cut down on their own carbon emissions while reporting accurately on the climate crisis.

The Guardian is the first major UK newsbrand to become B Corp certified and has banned fossil fuel advertising on its publication since 2020.

Fleetham said: “I would ask advertisers and agencies to think about what they’re funding. If you’re gonna define corporate values, there’s not much point to you defining them, and then spending your money in ways that contradict those [values].”

The full recorded webinar can be watched online here.