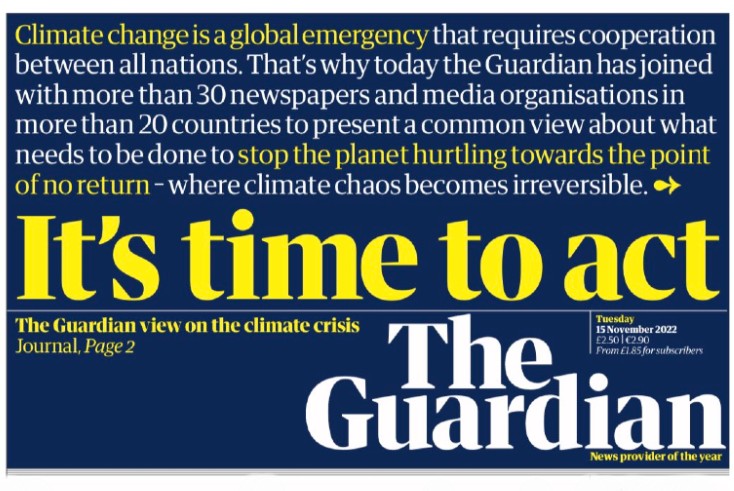 The Guardian has led a coordinated effort from over 30 global newsbrands to release an editorial urging action on the climate crisis.

The editorial calls for the “bare minimum” of a windfall tax on the biggest fossil fuel companies, with funds being redistributed to poorer, vulnerable countries that are suffering the worst impacts of the climate crisis despite having done the least to cause it.

Additional papers that ran the editorial in coordination with The Guardian include US titles Rolling Stone, The Nation, and The Miami Herald, and British title the Daily Mirror.

“Rich countries account for just one in eight people in the world today but are responsible for half of greenhouse gases. These nations have a clear moral responsibility to help,” the piece reads.

It warns that the “gold rush” for new fossil fuel projects, as countries seek to decouple their energy demand from Russia, risks “locking the planet into irreversible damage”.

The editorial continues: “solving the crisis is the moonshot of our times. Getting to the moon succeeded within a decade because huge resources were devoted to it. A similar commitment is needed now.”

The release comes as global leaders continue to meet in Sharm El-Sheikh for the COP27 global climate summit.

Speaking last week at Ad Net Zero’s Global Summit 2022, representatives from The Guardian described how the publication has led the charge on climate issues both in its reporting and in its handling of advertising.

The newsbrand has expanded coverage on the issue of climate in recent years, with readers spending a combined 538 years reading such work over the past year. The Guardian has also sought to incorporate a sustainability angle in stories and product reviews across multiple sections beyond geopolitical reporting, such as in Fashion, Food, and Technology.

The company is B Corp certified and in 2020 it became the first (and still only) global publisher to ban ads from “fossil fuel extractors” such as oil and gas companies. However, the publication still accepts and runs ads for high-carbon products such as SUVs and airlines.

Addressing media professionals, The Guardian‘s director of advertising Imogen Fox stated: “We just can’t look at advertising through rose-tinted glasses anymore”, adding that the advertising industry has grown the carbon footprint of every individual massively as the energy required to run thousands of digital ads at an individual per day has ballooned in the digital age.

She added: “The industry that we work in really does have the power to encourage people to really adopt low-carbon lifestyles. And we have to seize that opportunity before it’s too late”.

The Media Leader will host a webinar on confronting the climate emergency in partnership with The Guardian Advertising on 30 November.