ITV CEO McCall: our competition has moved beyond broadcast 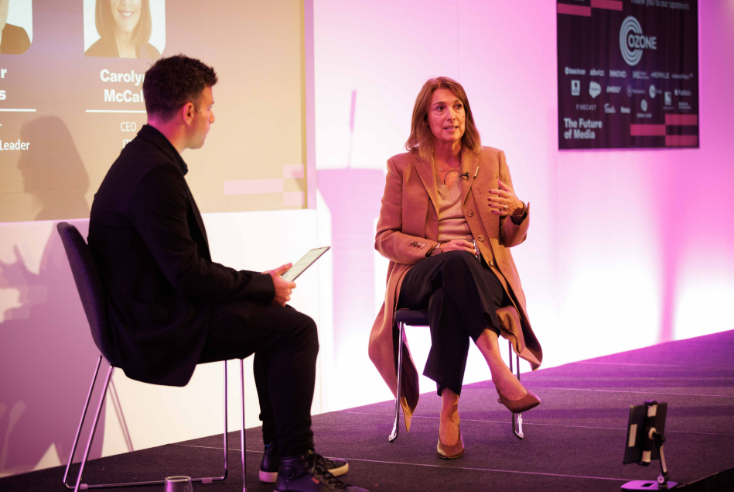 ITV’s main competitors are not necessarily other broadcasters or global streaming services, but “anyone that takes eyeballs away” like social media and digital companies, CEO Carolyn McCall has told The Future of Media.

McCall spoke to The Media Leader editor Omar Oakes at the conference in London today about plans for launching streaming service ITVX and where linear and streaming is headed in the UK.

ITVX, the new free ad-funded streaming service combining catch-up service ITV Hub, which currently has 30 million subscribers and 1,500 hours of content is slated to launch to coincide with the Qatar World Cup in Q4 2022, McCall said.

While she could not reveal a specific launch date or price range for ITVX Premium (the ad-free subscription option for the platform) she did say that prices of £3.99 and £5.99 a month for ITV Hub and BritBox, respectively, would be “held” for a few months after the launch of ITVX.

McCall revealed that many of the team from BritBox were working on the development of the tech and content behind ITVX, and that when it debuted there would be 9,000 hours of content on the platform spanning drama, sport, news, documentary and more.

When asked about her perception of ITVX’s main competitors, she stressed: “We are not a global streaming platform and we never will be.”

She clarified that ITV is primarily a public service broadcaster with local and national commissioning and programming, with particular strengths in drama, live sport, trusted news and soap operas, amongst other original shows.

The only vertical of content from ITV that could live across other international streamers would be drama, McCall highlighted.

‘Competitors are anyone taking away eyeballs’

McCall went on to say that actually she did not see other broadcasters or even necessarily streamers as the main short or long-term competitors to ITV or ITVX, but actually it was as much “anyone that takes eyeballs away”, such as Facebook, Google, and TikTok, rather than Netflix and Disney+, for instance.

She “welcomed” ad tiers being introduced on global streaming services Netflix and Disney+,  scheduled for November and December respectively, adding that it would be “good for TV” as a whole.

However, McCall did add that introducing ads to a platform “was not as easy” as the streamers may think, and that for many consumers they do not see the difference between TV and streaming in any case.

She stated that the main priorities for ITVX included improving the user experience when it comes to the range and personalisation of content and how ads are viewed, as well as competitive pricing, advanced audience targeting for advertisers, and a focus on weekly exclusive content premiers.

McCall disclosed that ITV was not being “unrealistic” with the launch of ITVX, saying she was not expecting a huge growth in under-25 audiences for example, but that a lot of the programming on the platform would have “massive” 16-34 audiences, including Big Brother, I’m A Celebrity, Tell Me Everything, The Confessions of Frannie Langton and Litvinenko.

She remarked that no funding for linear programming was taken away to fund the launch and development of ITVX. Specifically, an “extra” £160m was put towards ITVX’s content, and £140m for its data and analytics.

When asked about priorities in the diversification of revenue streams, content and ad formats she said it was “a virtuous circle”; where what is good for viewers is good for advertisers, so the focus would be on creating quality content to attract viewers, and in turn revenue and advertising.

Taking place on 12-13 October, this year’s Future of Media event focused on the leaders of today and tomorrow coming together to debate and challenge the status quo, to learn from each other to create a better tomorrow, while embracing disruption, innovation, and new ideas. The Media Leader is part of Adwanted, the parent group for Mediatel Events that runs the Future of Media event series.