Under-fire Truss is testing Tory newsbrands’ faith to the limits 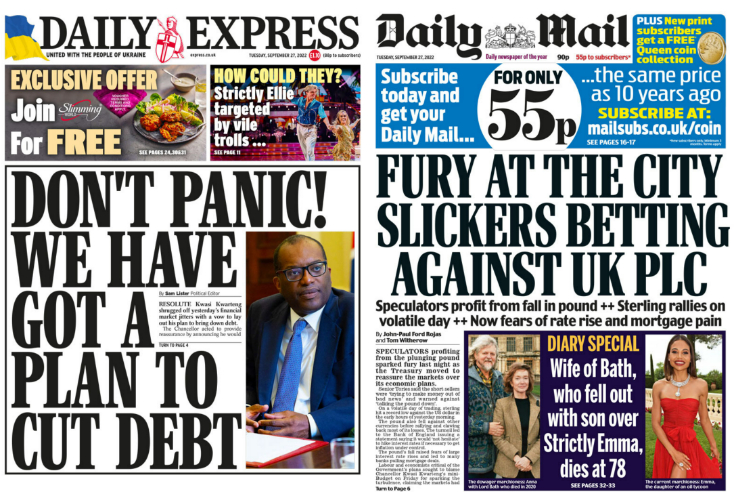 The Tory newspapers are placing bigger and bigger bets on the new Prime Minister and Chancellor, but their faith may run into a harsh reality.

The media is a rough old game at the moment. The ink had scarcely dried on the very last tranche of special colour Royal souvenir supplements when you have a cost of living crisis on top of an energy disaster and then a self-inflicted run on the pound.

This will keep journalists on their toes particularly those who didn’t make it much past “O level” economics.

Those with history qualifications might fare better, equipped as they will be with the tools to challenge the universally agreed line from the Cabinet — give us time, this Government has only been in power for 20 days.

Clearly the Government needs reminding, over and over, that they have been in power for more than 12 years, or if you want to be pedantic, since 2019 when the Conservatives last faced the electorate.

It is pleasing to see that Sky’s Kay Burley can remember all the way back to October last year when the £20 universal credit top-up was not renewed.

Burley asked Chloe Smith, Secretary of State for Work and Pensions, whether the Government planned to restore the £20 a week credit.

“No” was the answer.

Burley, who obviously also paid attention in maths classes, immediately pointed out that the Government’s new income tax credit for a millionaire at £55,000 equalled more than 53 years worth of £20 top-ups.

So far broadcasters are doing well in questioning both the fairness and economic wisdom of cutting taxes while increasing borrowing against the background of the huge surge in energy prices flowing from the war in the Ukraine and rising inflation.

It was also good to see the BBC has finally got on to a very old story that in 55 Tufton Street there exists floors of neoliberal “think tanks” that helped to inspire both Brexit and Liz Truss/Kwasi Kwarteng economics.

Support fraying at the edges

It was quite incredible to find no mention today of the economic crisis on the front pages of the Daily Mail or the Daily Express. While the Tory-supporting Sun splashed on the issue of mortgage rates surging, the Mail’s coverage was pushed all the way back to page 14.

However, the activities of the traditional Tory-supporting newspapers show a little fraying at the edges coping with the unexpectedly dramatic announcements and can manage two cheers at best for Truss and her “courageous” Chancellor.

The scale of the political challenge faced by the ultra-loyalist press can be seen in a wondrous selection of four Daily Express front pages from across the Tory years, assembled on Twitter by Wigan director Mike Flitcroft.

Every one a gem. pic.twitter.com/olHkd1Jhz7

The first reads: “David Cameron Can Save Britain,” followed by “Vote May Or We Face Disaster.” Then there is: “Down But Not Out! Why We Must Put Faith in Boris,” and then the historic final effort in the quadriptych: “Put Faith In Truss To Deliver For Britain.”

There is only so much faith that even a newspaper such as the Daily Express can summon up in the face of accelerating events.

Their faith, and indeed that of all the Truss believers from The Sun and the Daily Mail to the Daily Telegraph, may be running into a very harsh reality.

From the brutal world of the markets a terse forecast from Nomura, the Japanese bank. “Hope is not a strategy. Parity (between the pound and the dollar) by the end of November, 0.975 by year-end and 0.95 in the first quarter (of next year),” Nomura predicted.

If such a thing were to happen to the pound against the dollar it is difficult to see how Truss and her very hopeful Chancellor, could survive for long.

For now, papers such as the Daily Mail are still whistling a happy tune and offering the comforting news that Kwasi is drawing up a fresh round of tax cuts to help families struggling with the cost of living presumably involving yet more borrowing.

The paper has now opened up a new front in the battle by blaming “the City slickers” who are betting against UK Plc without considering the policies that allowed such a thing to happen.

The pound has rallied to £1.08 against the dollar but the Chancellor could still be in a foot race against the falling value of the pound, and associated price rises including increasing the price of gas and oil, unfortunately priced in dollars.

Who is Patrick Minford?

The secret weapon for Truss and her loyal press is the 79-year-old economics professor Patrick Minford.

When, during the Conservative leadership election campaign, Truss was asked by Nick Robinson on Radio 4’s Today programme if she could name an economist who believed you could cut taxes in the midst of rising inflation, without making that inflation worse. She could. Patrick Minford. Truss was lucky Robinson only asked for the name of one economist otherwise she might have struggled. The reply caused an intake of breath by anyone who knew of Minford’s reputation for eccentric views and warm support for Brexit.

Minford from Cardiff University argued that the UK would gain 4% of gross domestic product (GDP) after leaving the EU even without a deal. As was pointed out at the time his analysis assumed that the EU would waive all its standards on goods imported from the UK.

In every respect the opposite has happened.

For good measure Minford admitted that leaving the EU would “mostly eliminate manufacturing,” including the car industry but it was a price worth paying because the UK could still rely on industries such as design and marketing.

The Sun was relatively even-handed in its coverage of the Chancellor’s budget announcements under the headline: “ Huge tax cuts for all.. BOOM! Let’s hope we don’t go…BUST!”

The paper even reported the view of the Resolution Foundation that the rich would gain most from the plans.

Columnist Trevor Kavanagh, who not so long ago had been lamenting the demise of Boris Johnson, supported the view that it was “a risk worth taking” before looking to Minford for support.

Labour leader Keir Starmer should not lick his lips too soon, Kavanagh warned.

According to one “tried and trusted expert,” a temporary fall against the US dollar could even be a good thing.

The expert was of course Minford who said a falling pound would make exports cheaper and force us to rethink our energy supply policy.

“Sun readers will be among the winners,” said Minford.

Leaving aside the question whether the fall will be temporary — the “devaluation” following Brexit has been stubbornly permanent — we import far more than we export and “ rethinking” our energy supply polices is hardly an overnight matter.

Unsurprisingly Truss, in an article for the Mail on Sunday, made no apology for her tax cuts. Alongside her piece there was a page for Minford, a former adviser to Margaret Thatcher, to argue that “all in all, the package represents an excellent first step towards a new era of free trade, deregulation and tax reform.”

We will see, although Minford’s previous forecasting record might suggest the need for caution.

What is clear is that the Tory newspapers are placing bigger and bigger bets that they will not be looking for yet another Conservative Prime Minister, or at the very least a Chancellor, by the Spring.