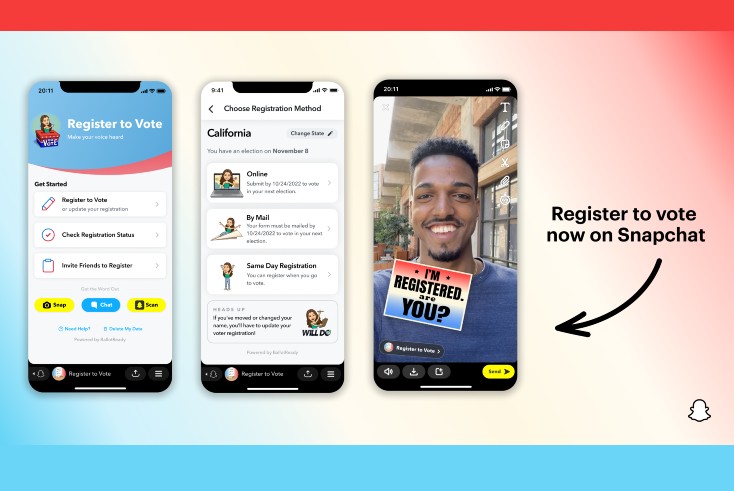 Snapchat has rolled out a suite of tools to “empower” Snapchat users in advance of the 2022 US midterm election.

They include a redesigned Register to Vote tool, in partnership with BallotReady, that helps users register to vote and allows 16- and 17-year-old Snapchatters to pre-register in select states where available.

In conjunction, Snapchat is launching an organizing hub within the tool that enables users to reach out to friends who they know still need to register to vote.

Snapchat will also create a “Voting 101 Hub”, where users can find informational videos instructing them on how to register to vote, how to become a poll worker, and what voter ID they might be required to have in their state.

The tools were developed in further partnership with Nonprofit Vote, Vote Early Day, Power the Polls, Lawyers Committee on Civil Rights Under the Law, and VoteRiders.

Snap also intends to leverage its augmented reality technology—namely its Lenses and Filters—to encourage its users to get out to vote. Further, Snapchat’s team of content curators is planning to feature local Map stories highlighting voter engagement content.

Regarding safeguards for misinformation and disinformation spread on the platform, Snapchat highlighted its partnerships with “accountable publishers” on its Discover page, which include NBC News, Refinery29, VICE, The Wall Street Journal, and Good Luck America. Snap also said it “reviews user content” before it’s eligible for amplification to large audiences via its Spotlight feature.

The social media company stated its “approach to enforcing against content that includes false information is straightforward: we remove it”. Snapchat’s content guidelines prohibit spreading false information that “can cause harm” — including conspiracy theories, denying the existence of tragic events, unsubstantiated medical claims, or undermining the integrity of civic processes.

Snapchat further noted that it partners with the nonpartisan Poynter Institute to independently fact-check political and advocacy ad statements, and applies a “paid for” message that discloses the sponsoring organization of the advertisement. It further provides access to information about ads that pass the company’s review in its Political Ads Library.

Snap also prohibits the purchase of political ads from outside the country in which the ad will run.

In the second half of 2021, Snap “took action” against 14,613 pieces of content and accounts for violations of its policies on false information.

Other social media companies such as Meta, TikTok, and Google have also recently detailed policies related to the 2022 US midterm elections.