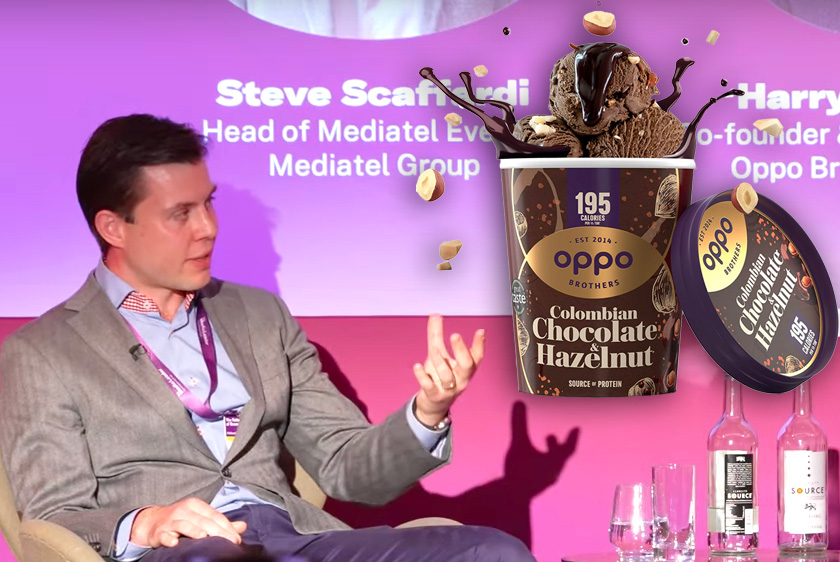 As Harry N. Thuillier recounts, the idea for Oppo Brothers’ low-calorie ice cream was born out of unlikely circumstances. Harry and brother Charlie were on an expedition in Brazil in 2011, bidding to set the record for the longest kite-powered land journey. Slowed by swampy terrain and short on supplies, they were forced to forage for coconuts and berries.

And – as Harry told Mediatel’s Future of Brands event – while sampling his freshly-picked snacks, he wondered “why can’t great tasting food be healthy too?”

Thuillier explained that, upon returning home, the brothers became ice cream obsessed, testing over 1,000 recipes concocted from a mix of low-calorie substitutes for sugar and fat.

Eventually they spooned their most successful creations into Tupperware boxes and took them to Waitrose head office with high hopes and low expectations. Fast forward to 2022, and Oppo Brothers ice cream is stocked in over 10,000 stores across 11 countries.

“There’s an amazing case for innocent naivety here,” Thuillier said when asked how they convinced Waitrose to stock their product. He also confessed that they “hadn’t sold a single tub’ before winning the supermarket giant over.

Neither of the brothers had food industry experience, but they saw a gap in the market, so they went for it, even though, as he revealed: “Someone very senior at an ice cream brand told us they had spent £20m trying to do what we were doing.”

An appearance on Dragon’s Den raised public awareness of Oppo Brothers to the next level, although at first they were reluctant. “The BBC had got in touch with us previously, but we rejected it. Then we realised it had 4-5 million viewers.”

So were the Dragons ‘in’ or ‘out’? They liked the taste, but weren’t convinced enough to invest. Harry recalls: “Touker Suleyman told us we looked like a couple of estate agents.”

Undaunted they began crowdfunding, resulting in the fastest funded food and drink campaign on Seedrs. This allowed them to pitch – successfully – to Sainsbury’s and Tesco, and take the next step to becoming a familiar brand in supermarket freezers.

For all the exciting highs of the Oppo Brothers story — including investment from ice cream fan and tennis star Andy Murray — Harry said creating the business has taken time and hasn’t been without its setbacks.

“It’s like building a house, everything takes two or three times the amount of time you expect,” said Harry. “What has gone to plan was creating the product range, working with good factories, getting the right people on board and being lucky enough to get some funding.”

Having a good team around them, with more experience in brand marketing has helped the brothers “avoid errors that we made in the first couple of years”. Harry’s recipe for success is, “It’s always the people that you can work with, and a bit of bloody mindedness.”

The brothers also don’t need to be quite so hands-on these days. “Either you switch off and let them crack on, or immediately something catches your eye. Anyone who works with founders will know they can be annoying, are very passionate, and they think they’re always right, but often they’re not.”

So what’s next for Oppo Brothers? European expansion is on the list, plus they have just become a BCorp. But for Harry, it’s all about the product: “We just want to keep creating ice cream that makes you feel good.”