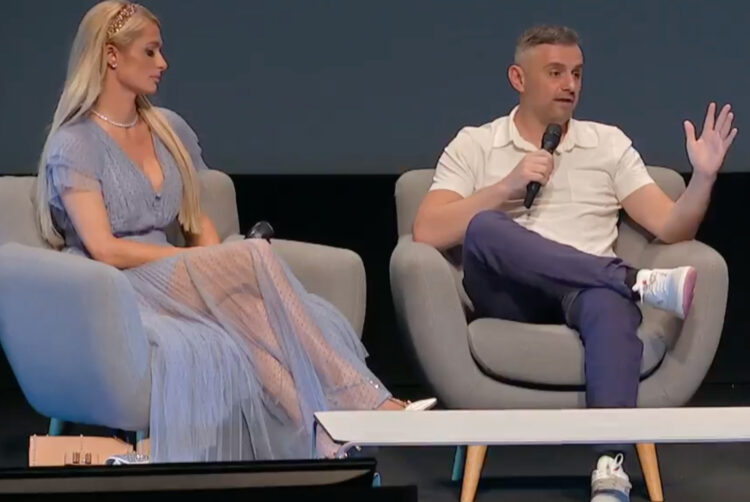 It might not win an award or applause at Cannes, but doing the hard work of rebuilding trust in media could be the most important thing you do.

“This industry has forced remarkably creative people to make fucking vanilla bullshit. [APPLAUSE] … There’s not a human on earth that is actually consuming these television commercials. Web3 is going to allow impulsive explosion of depth because we’re going to be able to verify it, we’re going to see what people are going to be able to do, we’re going to have cleaner data… many of the people sitting in this room right now are going to quit their creative agency, do their own art and make as much money as they make now working on shit they don’t want to work on or people they don’t want to work for and instead be able to sell NFTs and express themselves.”

This hyperbolic take came out of the tireless mouth of VaynerX and VaynerMedia founder Gary ‘Vee’ Vaynerchuk. Vee was holding forth on stage at Cannes Lions last week, flanked by Paris Hilton (that rich and famous person who keeps saying and doing boring things but never seems to go away).

Who would’ve thought telling a room full of creative professionals how talented but unfulfilled they are would be an applause line?

But then comes the trick: Vee blames their vanilla-flavoured misery on one media technology (television) and then extolls the virtues of another (NFTs), backed up by some breezy (but pretty important) caveats about verification and clean data.

Sure, there’s a lot of advertising out there and some percentage of it isn’t very good. Perhaps I’m that one “human on earth” who is still watching them. But whether advertising needs to be very good, or just needs to be not terrible but have the right paid-media strategy and investment behind it, is a key question that marketers have asked themselves for decades (at least I hope they have).

It’s the key question behind Strategy Leaders, our curation of thought leadership and analysis about brands’ commercial media strategies, which, according to Havas Media CSO Eva Grimmett, has been facing a crisis within agencies.

Lies are archived, rage is amplified

But this particular enthusiasm for non-fungible tokens, web3, and cryptocurrency before that, suggest something deeper is going on. The reason ‘Gary Vee’ can say something so outlandish, and receive applause instead of being laughed at during the world’s biggest advertising festival, is cause for concern.

We are facing a crisis of trust in institutions. We have become so mistrustful of elites, politicians, bankers, corporations and yes, even journalists, that we are in a mode of being seduced by the power of technology to do things for ourselves.

The shadowy figure behind Bitcoin, who uses the pseudonym Satoshi Nakamoto, was clear about their motivations from the start. In 2009 they wrote: “The root problem with conventional currency is all the trust that’s required to make it work. The central bank must be trusted not to debase the currency, but the history of fiat currencies is full of breaches of that trust.”

For now, resist the urge to choke on the fat dollop of irony, given that buying or selling Bitcoin requires you to trust the thing’s computer programmers have actually done what they were supposed to. But if you must be snarky, this website offers a glimpse into how web3 might not be going “so great” after all.

This chronic lack of trust has been brewing for decades. In the mid-sixties, nearly eight in 10 Americans said they trusted politicians to ‘do the right thing’. That number has plummeted to around 20% in the last 15 years. Last December, the UK think tank IPPR reported almost two in three people see politicians as ‘merely out for themselves’. Only 35% of people had this view in the mid-20th century.

From the first televised US presidential debate in 1960, to the rise of 24-hour news and now social media, everything people in power do is recorded and archived forever. Every mistake is searchable, every lie is indexed, and we are far more likely to see for ourselves how weak and corrupt people in charge really are.

Meanwhile, there is so much ‘content’ out there that it’s easy to feel overwhelmed by information overload. When unable to do the messy work of evidence-based research, most of us will resort to mental shortcuts and stereotyping, which usually manifest as pearls of wisdom like “they’re all as bad as each other!”

And, of course, what cuts through such noise is usually what makes us fearful or outraged. A case in point being Facebook, which has been incentivised to monetise its users’ attention through advertising. This has led to an amplification of misinformation, toxicity, and low-quality news, according to the Facebook whistleblower Elizabeth Haugen.

Advertisers and their media agencies can help to restore trust in institutions by ensuring their media buys only fund quality publishers who pay people to verify the information they put out there.

No need to rely solely on algorithms. No blockchain, no feeds. Restore economic incentives to produce media we can trust, funded by mass-market advertising and not only by rich and powerful owners.

But they don’t. Misinformation continues to plague our ecosystem. Even the ‘premium’ end of the programmatic supply chain leads to adspend disappearing down a black hole, with publishers only receiving half of the money paid for their ad inventory.

They also need to invest in independent and active ad fraud detection. In March, and again earlier this month, I challenged the global network agency groups to prove that their clients’ programmatic spend is not going towards fraudulent websites, or websites known for disinformation. I’m still waiting.

I suspect the answer for why is because, as an indie media agency boss told me over lunch recently: “we thought about it and the only answer we came up with was: just turn the whole bloody thing off”.

Perhaps, but we can’t turn off media or technology any more than we can stop the sun from rising again tomorrow morning. I still believe we can restore trust in media but it will likely happen slowly and unspectacularly by a silent but diligent army of our industry’s most decent marketers and agency bosses.

There will surely be no applause or awards at Cannes Lions for these people, but they are the ones we are all relying on.

Jim Murray, Boss, Murmarketing, on 29 Jun 2022
“I've been following Gary V for a number of years now. He has not just mastered but pretty much perfected the art of saying nothing and making it sound uber important. Trust in brands can be easily verified by a trip to any grocery store during the pandemic and seeing what's not on the shelves. I worked in advertising for 50 years and over the last 20 to 30, I have seen a slow and steady decline in the quality of the creative product. And I put this right at the feet of all the people who have entered the creative and strategic ranks, who have not been mentored and even if they were, had the attitude that anything that came before them was old school and not relevant. I maintain it was they who eroded whatever trust in brands may have existed up to then. A lot of the friends I had from my time in the agency business noticed this as well. It was all about an attitude, but everybody wanted to blame the media. People don't care as much about advertising as advertising people think they do. Given half a chance they will tell you what they hate before they tell you what they love.”
Ian Dowds, CEO, UKOM, on 27 Jun 2022
“There's some good work done in Cannes. There's certainly some very good people who were working out there. However it's beyond worrying that such waffle as you quote (and I'm being very kind there with 'waffle') can get anything but stunned silence or laughter. 100% agree Omar - You are right that we CAN restore trust in media and I do hope so very much that there are still enough around of the "silent but diligent army of our industry’s most decent marketers and agency bosses." Keep fighting the good fight.”