Is cycling the new golf in media? 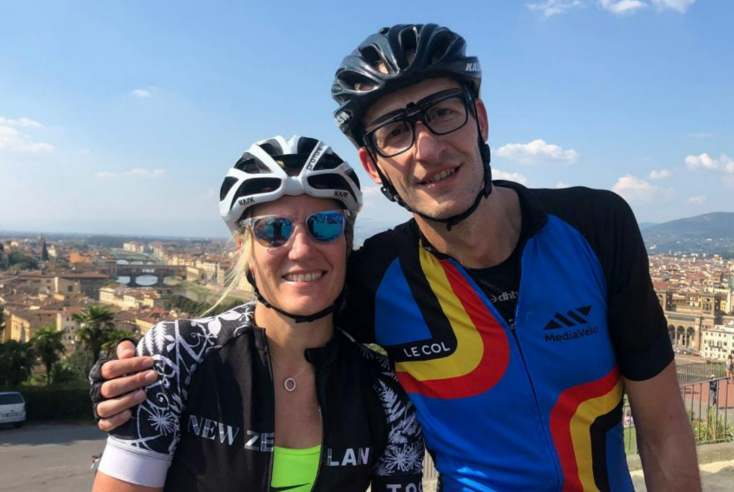 Cycling seems to be all the rage among media execs and ad buyers, particularly over the last five years. What explains this two-wheeled trend?

Ten years on from Team GB’s great success at the London Olympics, a lasting legacy seems the impact that cycling has had on the UK media industry. More and more people in media are taking to the two-wheeled sport, to such an extent that some say it will topple golf off the top spot for preferred sport amongst media professionals.

Such enthusiasm was on display in September, when 178 ad professionals in 19 separate teams attended Ride Adland, raising £35,000 in the process for NABS, the advertising and media industry’s wellbeing charity.

But why do so many people in media ride? Where do they ride and with whom?

On this topic, Sue Todd, CEO of NABS sees it as “a growing community” and of interest to a more diverse group in media than five years ago.

She added: “I think like the general population, we’re more likely to carve out time and money for all our passions than we did 10 years ago. We’re more attuned to the value of exercise and immersion in something other than work, for the good of our all-round wellbeing, and this is definitely a good thing.”

While Todd would not describe herself as “a serious cyclist”, she stepped it up as her main form of exercise after having a bad back.

She says: “I really like being outdoors. Cycling appeals to my sense of freedom, and let’s be honest, it beats being in the gym hands down.”

Todd rides mostly in Kent and Sussex and is thinking she may set herself a challenge to try the industry charity rides to the Alps that are occasionally shared on LinkedIn. She adds: “I’ll start with home turf and maybe try London to Brighton next year. I better start training tomorrow to have a chance!”

While cycling’s popularity in media is “definitely on the up”, NABS’ Golf Day is still a sell-out day and there is a lot of interest in NABS’ Learn2Love Golf package for newcomers to learn the game, she says, adding that in a head-to-head she sees cycling and golf as “pretty much tied” for popularity right now. Todd speculates that yoga, meditation and music would also rank highly as hobbies for many media leaders. 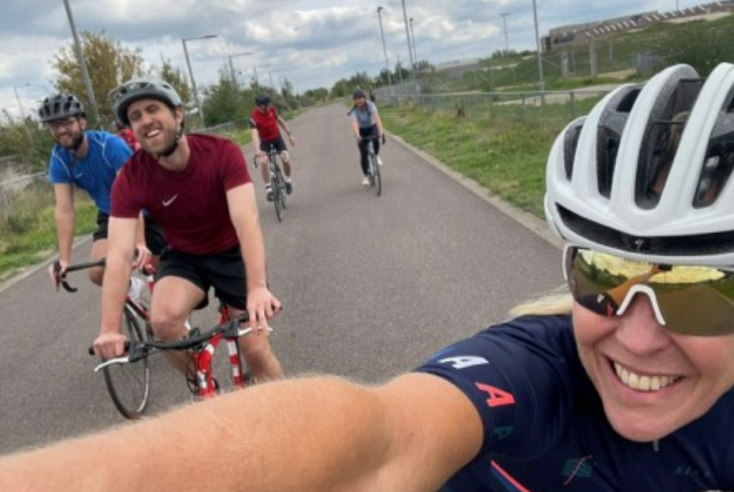 Grant Woodthorpe, executive director for investment at Mail Metro Media, and chair of the Ride Adland committee takes the sport much more seriously. Having started his cycling journey by occasionally commuting on a hybrid bike in 2006, Woodthorpe reveals it all changed when he got a Condor road bike in 2012. He as a “classic victim” of seeing Bradley Wiggins in the Tour de France and the Olympics that year, he jokes, which led him to joining a cycle club in 2014.

“Absolutely loads of people in media are keen on cycling and I ride with quite a few on a regular basis,” Woodthorpe tells The Media Leader. It’s definitely grown logarithmically in the last decade.”

They affectionately refer to themselves as ‘mamils’ (middle-aged men in lycra).

The Col to Cannes event, a “brutal” three-day ride taking in a climb of Mont Ventoux, attracted 30 riders on the two events they’ve done, Woodthorpe says.

This particular ride was also mentioned by another keen media cyclist, managing director of Bauer Media Advertising, Simon Kilby in his recent Fishbowl interview, who said climbing Mont Ventoux on his bike three times in a single day was one of his greatest achievements.

Woodthorpe calls being chair of NABS’ Ride Adland committee “an honour”, explaining: “I love Ride Adland — on top of raising valuable funds for NABS, it’s a brilliant, brilliant day out with loads of friends and colleagues. I love the fact that one great upside from Covid is that we adapted from the hugely successful office-based challenge to something really different and made it even better — having Ride Adland at the Olympic Park is just brilliant and gave everyone an opportunity to ride the famous velodrome.”

While he acknowledges golf is still “huge” as a sport for people in media, cycling is up there along with skiing.

Woodthorpe says he also values other “loafing hobbies” like films and gaming.

Richard Bon, managing director and Europe commercial lead for Clear Channel UK, told The Media Leader he was far from the only keen cyclist at his company, with the Clear Channel team being declared this year’s “ultimate champions” of Ride Adland. 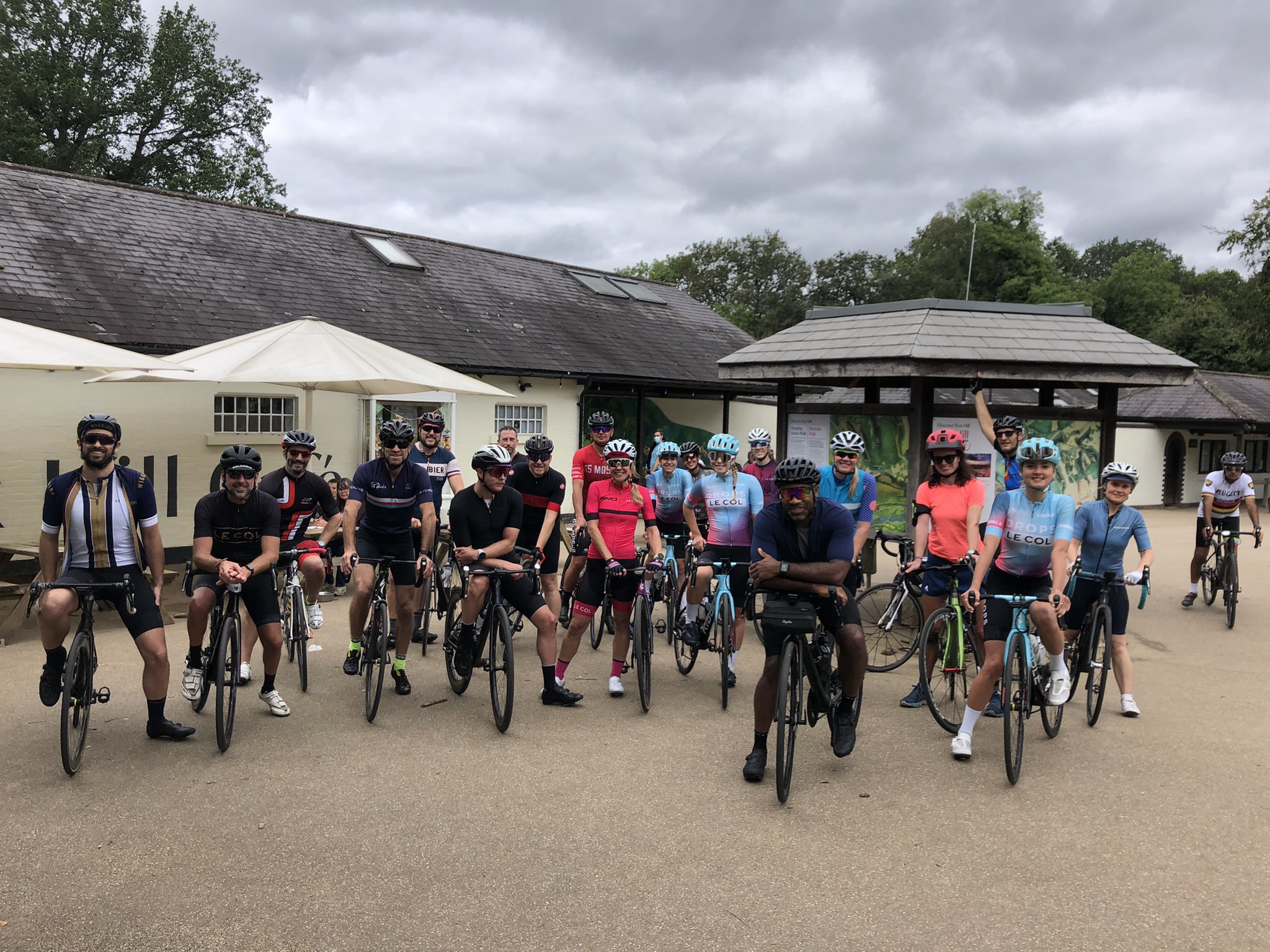 He remarks: “It’s outdoors, it’s inclusive, it’s a shared experience and we are good at it too, both with the team and partners. So no doubt it has legs!”

Other big Clear Channel cyclists include Melissa Cafferkey and Aimee McKay. Cafferkey joked to The Media Leader that they were so happy with their NABS Ride Adland win, who needed a Cannes Lion award.

When asked about why they took up the sport and what the attraction for people in media was in particular, Cafferkey (pictured, below left) says: “I was invited on a charity cycle ride in 2019, and it’s incredible once you mention you’ve taken up cycling you actually find out how many people in medialand also cycle who are not only willing to give advice on how to improve but also meet in their free time to do a few laps around Richmond Park at the weekend or sign up to a day’s cycle event.” 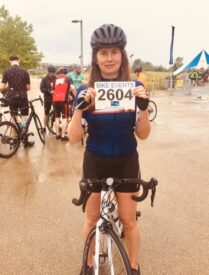 She found cycling was “brilliant” for her mental health as well, especially during pandemic lockdowns in 2020 and 2021.

McKay comments: “Personally I took up cycling after being invited to join an industry cycle (Kinetic Cycle) back in 2013 — two days of tough cycling from Milan to San Remo. After that, I fell in love with cycling.”

She added: “I have always been a fan of sports and the great outdoors so grabbed the opportunity — knowing it was great for fitness and social. It’s great for networking amongst the industry and I’ve not looked back since — getting involved in industry cycles and working with partners in this space to create even more opportunities to get people out cycling and in my spare time entering cycling events and triathlons.”

As for why it appeals to so many people in media, McKay said it is a chance to spend time away from the screen, network in real life and in the great outdoors. People can also make it as competitive as they like and industry events are open to all levels, making it a very inclusive activity.

Cafferkey notes: “Cycling is absolutely the new golf in media because it’s inclusive, unlike golf your riding as a team no matter your seniority or ability, everyone wants everyone to do well.”

She added: “Everyone has the ability to ride, you don’t need an expensive bike and once you get over the fact you’re getting in Lycra, yes — no one looks good in it, the bike opens lots of new roads and a new team spirit. I encourage everyone to start and keep peddling — no fancy membership needed for the outdoors!”

Curtis Weir, out-of-home director at Publicis Media UK and a Media For All (MEFA) mentor, is also a keen cyclist. He first got into cycling to commute to work to get in some exercise and avoid the Central Line during hot summer days. His first agency job had a Cycle Scheme work perk which allowed you to bike to work tax-free and pay for it as a salary sacrifice across the year.

After that he was hooked, going on his first cycling holiday in 2018 at ‘Zero Neuf’, a cycling retreat in the French Pyrenees, with his girlfriend and a few friends. It was the furthest he had ever cycled in one go, and they were surrounded by beautiful countryside, and had regularly stops for a café lunch and a well-earned beer.

During lockdown and a knee injury in 2020, he got his first “serious” bike, and he started to ride in and out of town, and when allowed, out to Kent and Surrey and up to the hilly parts of West Yorkshire. 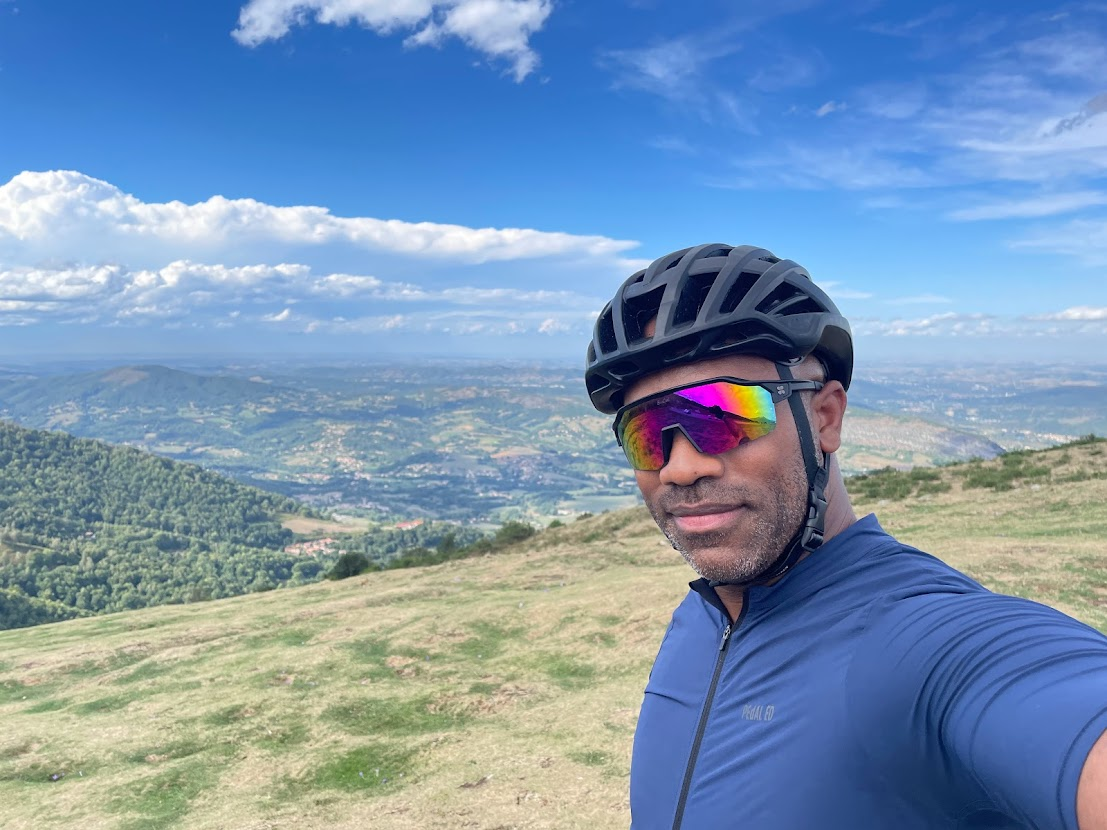 On why cycling and media seem to go together, Weir told The Media Leader: “Both the social and performance sides of cycling synergise well with Media. It’s a sport that anyone who has a bike can participate in. You can go out with a cycling club for a Sunday ride or a café ride with friends. If you want to improve your fitness methodologically, you can train on your own, track your progress on Strava, use a smart indoor trainer, and even compete with others in your area or online via apps.”

He added: “The sport became increasingly popular over the last decade, getting further kudos and prestige following the success of Team Sky and Team GB during the 2012 Olympics in London. And the idea of ‘marginal gains, 1% incremental improvements’ within teams and processes that, on aggregate, provide demonstrable advantages, have been linked to the sport despite having their origins in manufacturing.”

He says he does not think of cycling as “a sport” per se, something echoed by Jean de Gribaldy, the French road cyclist who said: “One plays football, or tennis, or hockey. One doesn’t play at cycling.”

Weir concluded: “Cycling is excellent for mental and physical wellbeing, a solo or social activity, practical for getting to work and a brilliant holiday or pastime to the countryside and see some nature.” 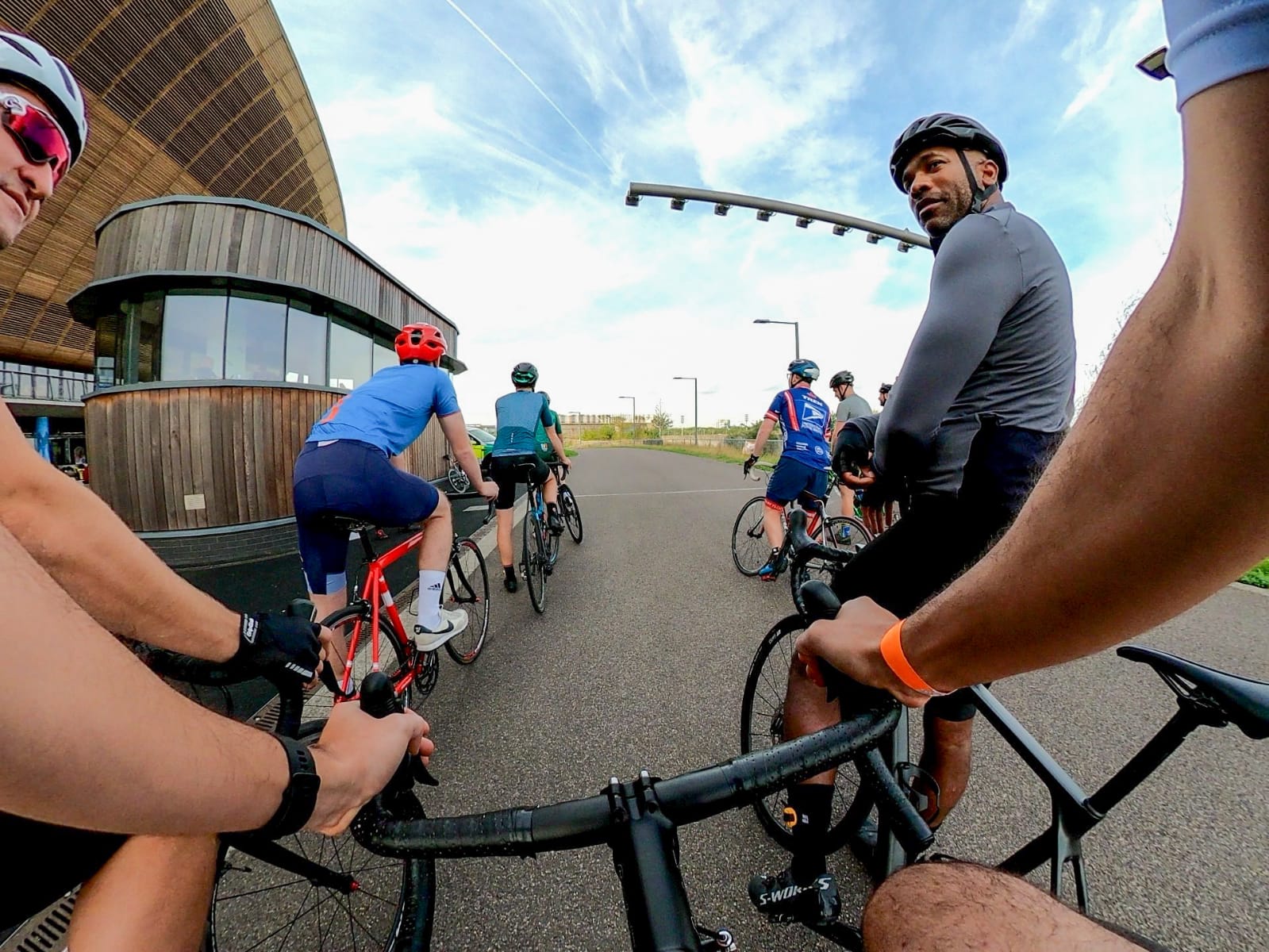 Weir and Team Starcom at Ride Adland in the Olympic Park