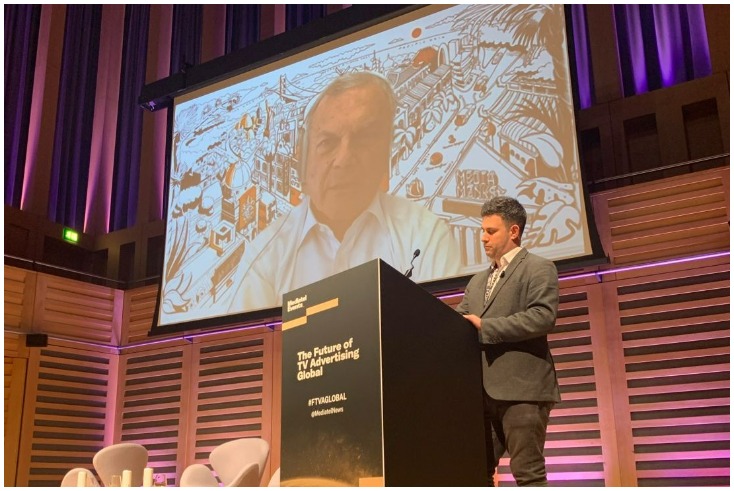 Anything on the screen is TV, Sir Martin Sorrell told delegates at The Future of TV Advertising Global conference last week.

This came as he was describing the “key players” in the digital ecosystem, Google, Facebook and Amazon which control over half of the advertising market because of the growth of digital.

In conversation with Mediatel News editor Omar Oakes, Sorrell pointed to other models to look out for in Alibaba and TikTok, and affirmed he thought TikTok and anything on the screen was TV.

This statement drew very mixed reactions from the room, particularly as differing views of Project Origin, the future of connected TV and the impacts versus impressions debate had already come to the fore at the two-day conference.

He later described TikTok as a “phenomenon” if it was true that it made $32bn in ad revenue in China last year and will continue on that trend every year. TikTok, owned by Chinese company Bytedance, exists as an international brand outside of China, where it is known as Douyin.

Rebound year to the year of the reckoning

The outlook for this year and next year is positive as it is “a rebound year” from the pandemic, but 2023 will be “the year of reckoning” Sorrell told delegates.

“I think we’re living in a little bit of a fool’s paradise at the moment and the reason I say that is everybody’s luxuriating in the rebound this year in the traditional media, but that’s principally because GDP growth is being driven by fiscal and monetary stimulus.”, he explained.

Sorrell added: “And when you get to 2023, and you will have to take this with two truckloads of salt, I think the rubber hits the road.

“All that fiscal and monetary stimulus will have evaporated by them, quite rightly because we have to pay for it so there has to be a reckoning and GDP growth will slow to the pre-Covid  levels of 2% to 3% and that will will go into the pre-COVID pattern with digital continuing to grow in share up to about 70% by 2024.”

Sorrell also highlighted the differences in rates of digital and linear growth and said he found the latest forecasts by Group M and Magna as puzzling as they put the current level of digital share as “too high”.

He went on to say that the industry should look at digital and traditional media as two worlds: “The sort of slow growth, no growth analogue market and high growth digital planet, which is can is growing strongly and will continue to do so.”

Later on in the session, he said he was “too old to wrestle with slow growth” and he wanted “to focus our push on an open door”.

In the question and answer session, Laura Chaibi, director of ad marketing and insights at International Roku, asked how Amazon going after promotion dollars versus advertising dollars affected TV.

Sorrell said that TV companies should also be looking at that segment of the market and “going after it as well”.

NickDrew, CEO, Fuse Insights, on 13 Dec 2021
“Just checking: is this the same Martin Sorrell who oversaw a precipitous drop (30% or so) in the value of WPP in his final year running it? The one who was let go abruptly for unspecified misdemeanours that are alleged to have involved misuse of corporate assets, company of a paid variety and/ or abuse of his underlings?
Just wondering why we still seek his opinion at such events”