Dips in TV and radio show ‘more challenging times ahead’ 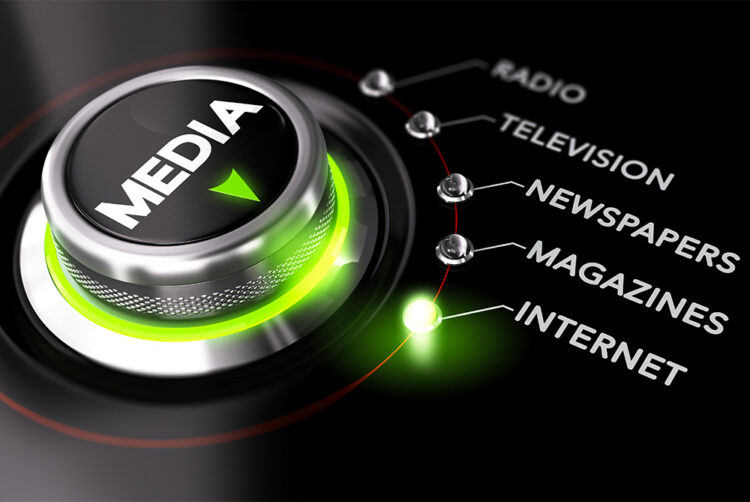 A drop in media spend on TV and radio in the second quarter of 2022 could be the first sign of “more challenging times ahead”, Nielsen researchers have warned.

Nielsen Ad Intel, a report on UK spend for the first six months of the year, revealed overall adspend in the first half of 2022 had increased by 20% compared to the same time last year.

Between Q1 2022 and Q2 2022 there was a decrease in spend on TV and radio of 6.1% and 5.9% which the report said could be considered “an indicator of more challenging times ahead for the industry”.

However, despite the quadruple digit growth figure from a lower base during lockdowns in 2021, cinema is still 25% behind pre-pandemic levels of £129m worth of adspend in H1 2019.

Paid social media advertising spend month to month was consistent across all categories so far in 2022. It reached its peak in March and fell to its lowest level in June in H1 2022.

Barney Farmer, commercial director at Nielsen said: “Advertising on a general level has been moving in a positive direction during the earlier parts of 2022, with some nice uplifts across all media channels. However, the headwinds facing the UK economy of inflationary pressures and sluggish growth, indicate that we may be going into more challenging times in the second half of the year.”

“Nielsen data suggests that adspend during a time of high inflation and increased energy costs has remained strong, yet we have seen areas where spending has started predictably to decrease in the second quarter of 2022. As consumers navigate through economic uncertainty, consumer spending might further decrease, causing companies to reassess their ad expenditures in quarters three and four.” 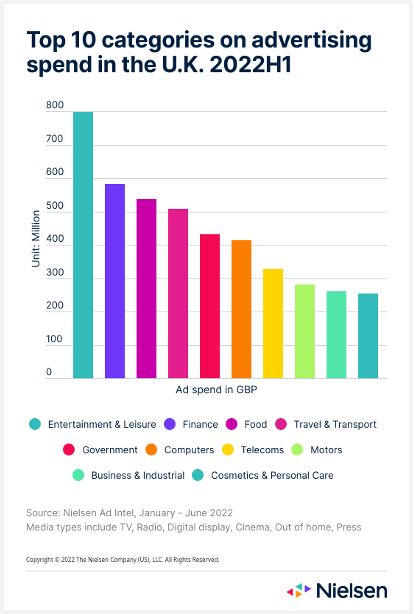 Within that, entertainment and leisure spend was up 30% year-on-year.

Larger streaming platforms continue to “heavily invest” in advertising with rises of more than 100% in some cases, but overall spend in a range of subscription services only increased 3% compared to the first six months of 2021.

Nielsen data also revealed overall spend for price comparison websites category decreased by 8%, which it called “unexpected” given consumers’ ongoing need to cut back on costs given rising prices.

Supermarket advertising spend went up by 7% compared in H1 2022 compared to H1 2021 with some “discounter supermarkets” increasing spend into the double-digits to encourage consumers to switch from “the Big Four”.

Food delivery services are one “discretionary” category that has continued to be “unaffected” by the cost-of-living crisis as its adspend as a category increased 70% compared to last year. Nielsen’s report suggested this could be due to not seeing a drop in consumer spending.

Meanwhile, retail, business energy and utility saw “a dramatic decrease” of 57% overall, with one leading energy supplier cutting its spend by nearly three-quarters (74%).