DCM Upfronts: cinema as the centre of attention 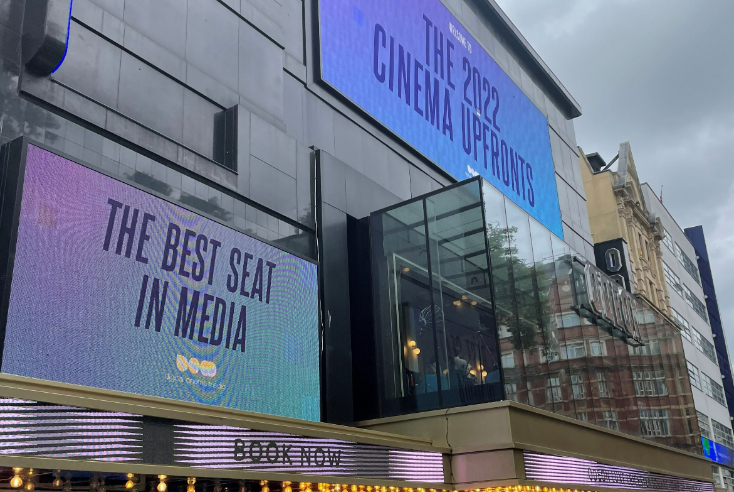 Cinema is back and a unique driver of attention, delegates at Digital Cinema Media’s 2022 Upfronts heard today.

Speaking at the event in the Odeon Leicester Square, Karen Stacey, CEO at Digital Cinema Media (DCM), made the case for cinema advertising to an audience of media agency buyers, highlighting how audiences are returning to cinema in massive numbers (particularly 16-34s), much-anticipated releases are scheduled on the film slate over the next year and cinema advertising has a fixed cost-per-thousand, which could prove decisive in the current inflationary media environment.

In the same vein, Stacey cited the Demand Generation study by Thinkbox which found the best output for campaigns was when cinema took 5% of an overall media budget, which is “the goal in life” DCM is striving towards.

At the upfronts, she also announced results from a new attention study by DCM and Lumen, Centre of Attention, for the fifth edition of DCM’s Building Box Office Brands series, which explored the value of cinema advertising in the AV channel mix, providing “empirical evidence” that viewers pay a high degree of attention to ads displayed in cinemas, affirming the medium as an “attention leader” in the industry and the “best seat in media”.

Introducing the findings of the study, she said: “The challenge is not reach but getting customers to pay attention, and pay attention to advertising.”

Using eye-tracking goggles on a panel of cinemagoers watching DC’s The Batman, combined with a quantitative survey afterwards to gauge brand recall and other metrics, the study found viewers watch 24 seconds of a cinema ad, a much higher number compared to television ads (14 seconds), non-skippable YouTube ads (4 seconds), and in-feed Facebook ads (2 seconds).

Amelia Wallis, lead attention research consultant at Lumen, highlighted the difference between viewable and viewed ads with a Specsavers campaign (pictured-below), saying just because an ad was viewable does not mean that attention was paid to it so it was not fully viewed. 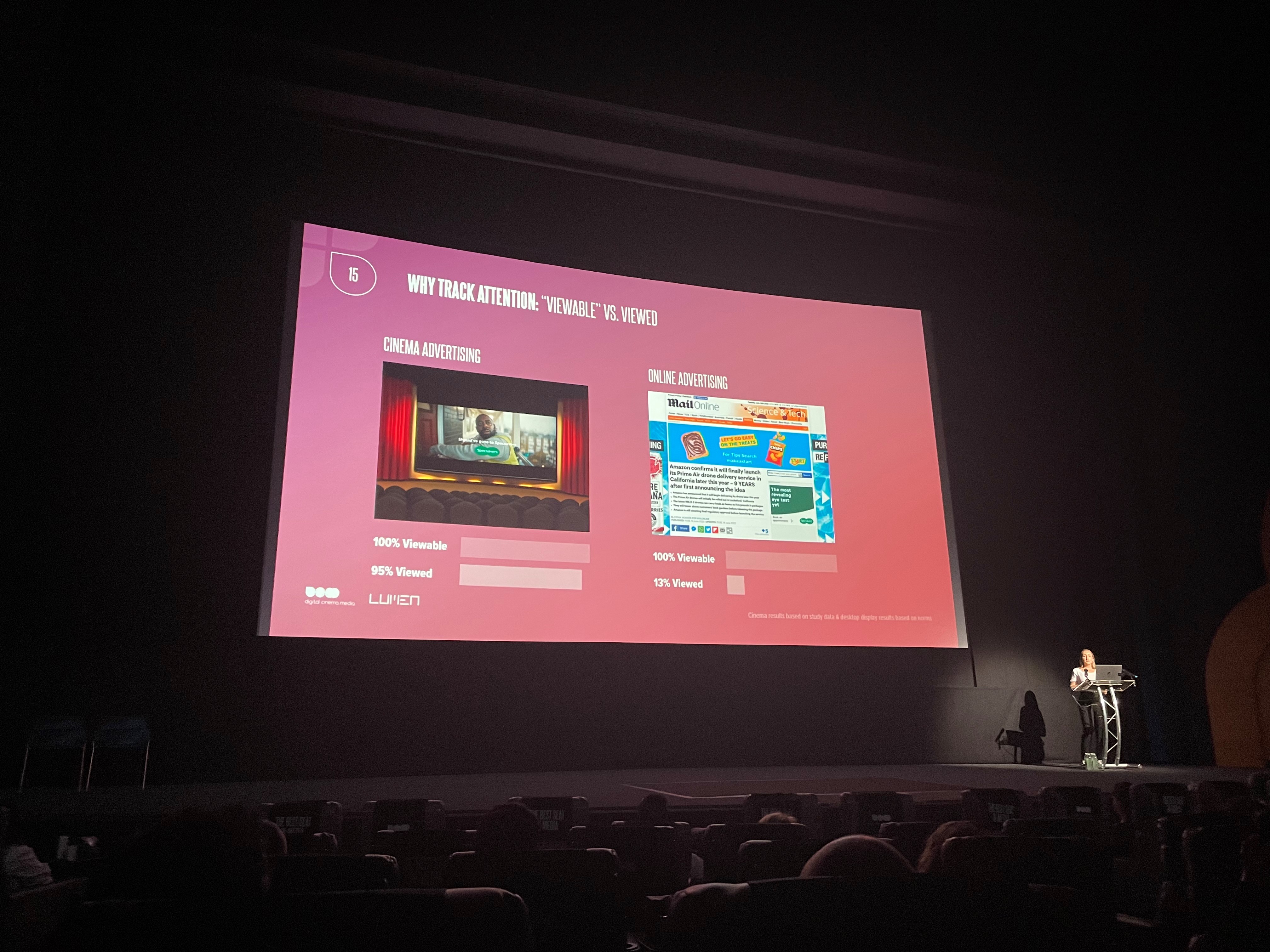 In this example, Wallis found the Specsavers cinema ad was 95% viewed compared to the digital banner which was 13% viewed, although both were counted as 100% viewable impressions.

This difference carried across other brand ads as she said: “Once in view, cinema ads are almost unmissable on average. 96% of on-screen ad impressions are viewed.”

Wallis also detailed even when accounting for time in view, there was not a significant difference in terms of attention between cinema ads that were more or less than 30 seconds; with 60 second cinema ads garnering 79% viewable time spent viewing and 30 second ads 76%, which “significantly” outperformed other media benchmarks, finding that cinema ads generated up to 77 times more share of viewing time than display.

She also commented that the study found the attention paid to cinema ads and movie trailers was very comparable, 77% versus 80% viewable time, and additionally attention to cinema advertising was “consistently strong” across all age groups. 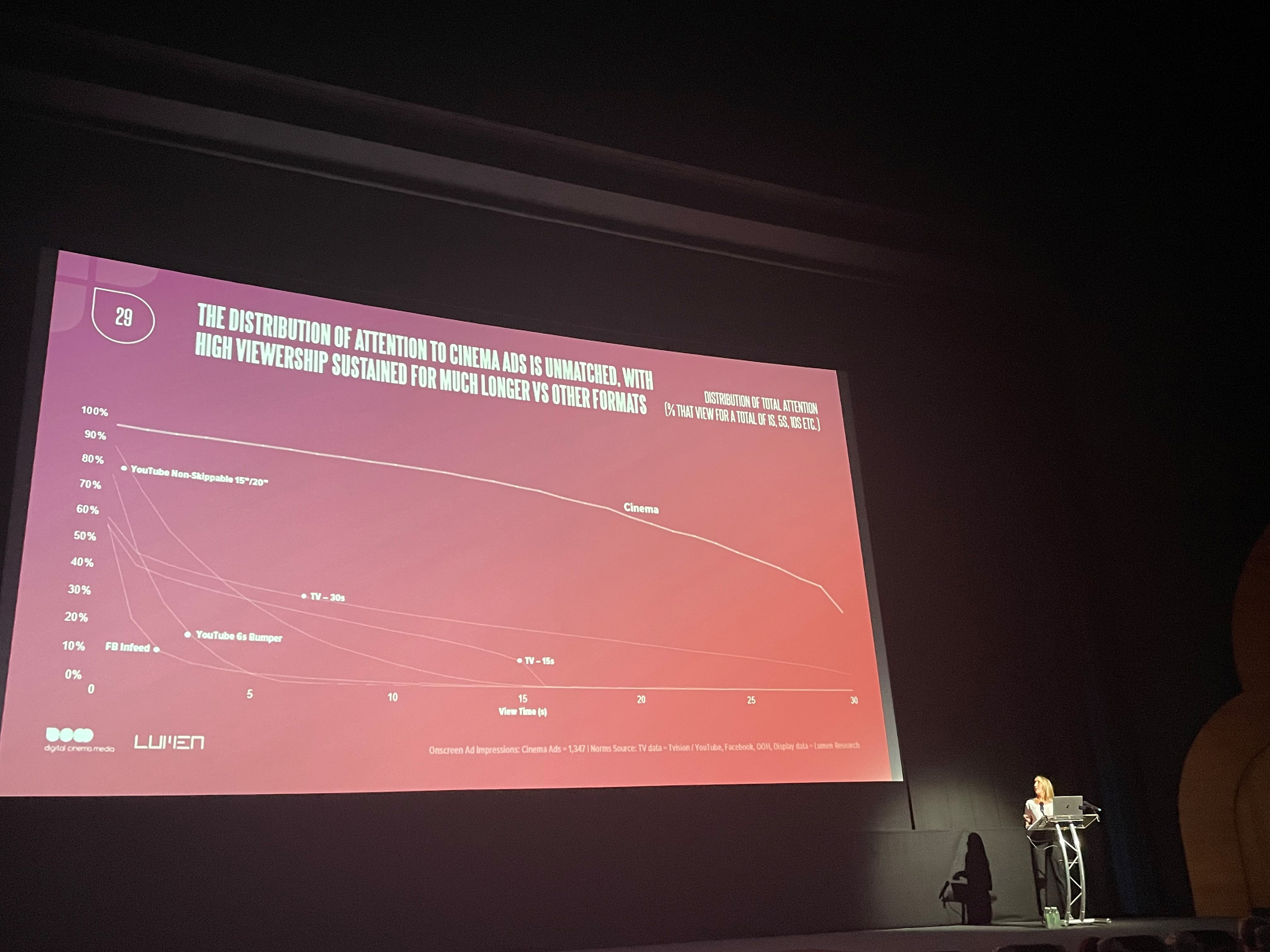 As a result of the big screens, high quality sound and audiences dissuaded from using mobile devices, she concluded: “Cinema proves a high attention environment for advertising which is really unmatched.”

The results highlight the potential for brand impact in using high-attention mediums. Wallis and Stacey mentioned research conducted by research consultancy Differentology over the past six years which showed exposure to a cinema ad delivers increases in ad awareness (+17%), brand image perceptions +(19%), consideration (+16%), and intention to act (+23%).

Dr Joe Devlin, a neuroscientist from UCL, spoke to cinema as a unique driver of attention, highlighting the location being different to people’s every day, the distraction-free focussed environment, the live audience element, the narrative storytelling, and big screen size contributing to better memory encoding.

He added he had observed increased activity in the hippocampus, varying heart rate, and electrodermal response which contribute to this memory building, which leads to better brand recall.

Devlin explained: “Cinema’s premium, high quality context for experiencing advertising ultimately increases the likelihood of making a strong, memorable impact that provides depth of information and processing—which when triggered by subsequent reminders on other channels can reinforce that initial impact”.

Stacey said of the cinema attention study: “Audiences are receptive to quality content in the right context and this study shows the valuable role cinema can play for brands, providing further compelling evidence that putting your ads where they will be the centre of attention—not somewhere they’re waiting to be skipped or scrolled past—will deliver real value and leave a lasting impact”.

In his talk at DCM’s upfronts, Tim Richards, founder and CEO of Vue, detailed how in 2019 cinema had the biggest year globally at the box office, and specifically in the UK, the box office peaked at 176 million admissions and £1.36bn, which he said was consistent with pre-pandemic trends.

In 2022, he said all audiences have returned in “record numbers”, but cinemas just need more movies to show as he pointed to the fact this was not a “normal year” for a film slate, but emphasised that 2023 beckoned with a more full line-up of blockbuster films including the hugely anticipated sequel to the all-time highest-grossing film globally Avatar.

Richards commented that the studios are now producing more films in the UK, and that if filmmakers want to make a film at Pinewood Studios or Warner Brothers Studios in London, there is a two to three year wait because of high demand.

He also dismissed predictions that streaming services would mean the end of cinema, saying that many had incorrectly predicted cinema’s decline in the past with the advent of the Internet and DVDs, but it never happened.

He added that a lot of the press has tried to make “a sexy war between streaming services and the cinema”, which he said “could not be further from the truth”.

He also highlighted growing future opportunities in cinema including event cinema, TV series showings, live sport on the big screen including UEFA Euros matches, the Premier League and boxing fights, trialling special “TikTok showings” for younger audiences, as well as rolling out reclining chairs across 50% of Vue’s cinema estate in the next few years which he said would be “game-changing”.

He ended his talk by saying: “We are back, we are not going anywhere and we are winning.”

2023 film slate: which films will impact most with which audiences?

To round out the conference, Michael Bensley, DCM’s new client director introduced Tom Linay, content business director at DCM and Korrine Eshun, agency manager at DCM who took attendees to the upfronts through the film slate for the next year, with top picks for different buying audiences and release dates straight from the studios latest visit to Europe in June.

They underlined additional considerations for media buyers including higher spot prices for TV advertising and “stereotypically” male-skewed programming potentially coming in Q4 2022 as a result of the Fifa World Cup, meaning cinema could be an ideal place to find fixed CPTs and content for other audiences including female, 16-34s and upmarket audiences.

DCM forecast Black Panther: Wakanda Forever to get the highest TVRs for the 16-34 age bracket and Avatar: The Way of Water to be most successful at the global box office across all audiences.

For the release of Bros, which comes out on 28 October, which has a nearly entirely LGBTQ+ cast, Linay and Eshun also mentioned they would produce a special ad reel featuring only LGBTQ+ ads.