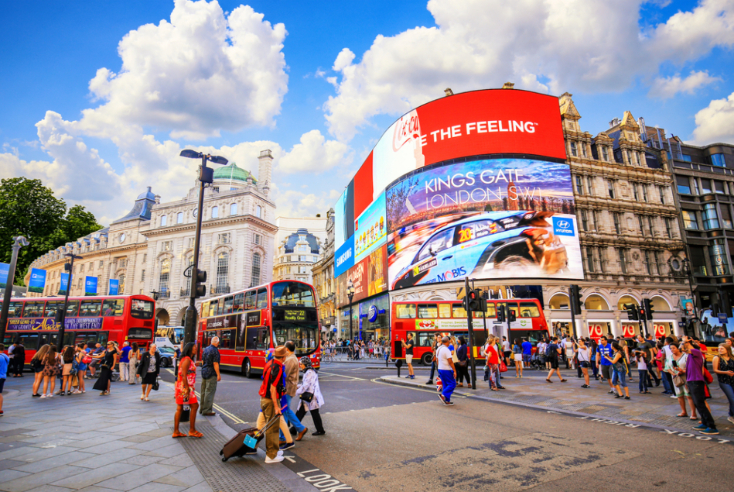 The UK ad market will grow by 3.8% to a total of £36.1bn in 2022, according to the latest quarterly Advertising Association/Warc Expenditure Report.

This follows an estimated 8.8% rise in adspend Q2 2022 and represents a “slight downgrade” of 0.4% from  last quarter’s forecast..

While the report still predicts growth in 2022, 2023 and 2024, it downwardly revised adspend projection estimates when factoring in high levels of inflation.

Real adspend growth was estimated to have slightly decreased by 0.1% for 2022 and it stated the projection for 2023 was a 3.0% “real-terms decline” once high levels of inflation are factored in.

However, spend during the “golden quarter” of Q4 2022 was estimated to have grown by 4.0% to £9.5bn thanks to Christmas and the FIFA Men’s World Cup. That figure amounts to a decline of a half point compared to previous forecasts, but the report stressed this should “nonetheless be considered as a good performance given economic challenges.”

Looking forward, the report added that expectations for almost all advertising and media sectors have been reduced in line with “pressures felt by all parts of the economy”.

James McDonald, director of data, intelligence & forecasting at WARC said: “With the economy enjoying modest growth in November, and inflation appearing to have reached its peak, it is likely that the UK narrowly avoided slipping into the recession at the end of last year that many had feared – but a downturn now seems unavoidable in 2023.”

He added: “The silver lining here is that our current modelling suggests that the slump will be short lived, with advertising investment set to lift by 5% over the first nine months of 2024.“

Jacque Chadwick, commercial trading director, Ozone told The Media Leader: “Nine consecutive quarters of advertising growth represents incredibly positive news for our sector, especially considering the backdrop of the past few years. While inflation, recession, cost of living and the conflict in Ukraine have never been far from the headlines, there is a definite sense of brands being focused on not losing ground to competitors – as evidenced in the 8.8% growth forecast for the year – rather than cutting back on advertising spend.”

Even so, as a result of this “tough” and “recessionary” environment, brands will have to consider how people’s priorities will change, stressed Tom Laranjo, CEO of Total Media.

He explained: “It will be important to both consider how people’s priorities will change, with early indications in the UK that people will focus their spending on travel, going out and entertainment, and how best to communicate to a brand proposition when people are feeling a real squeeze on their living standards. Switching, swapping, substituting, and trialling will be the behaviours that businesses will either benefit or suffer from. Those that win in this period will be the ones that leverage all of their marketing toolkit across price, promotion, place and product, to stand-out.” 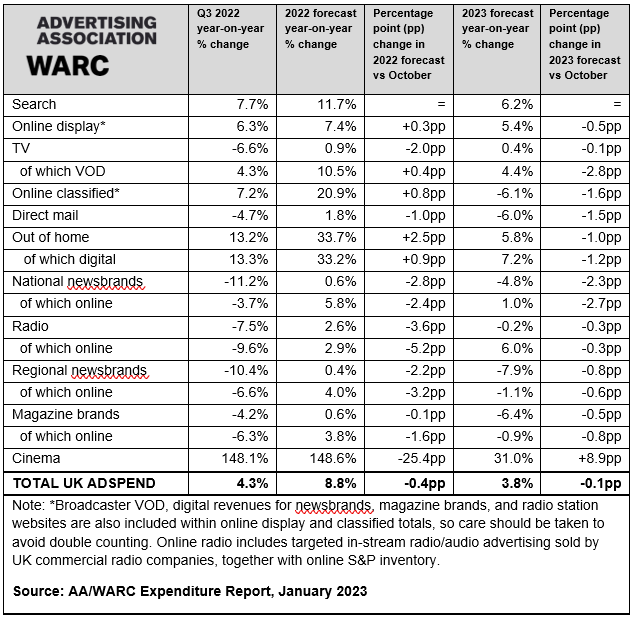 Out-of-home (OOH) and cinema recorded positive adspend recovery during Q3 2022 of 13.2% and 148.1% after suffering during pandemic lockdowns.

Barry Cupples, group CEO at Talon Outdoor, said: “It is encouraging to see continued recovery but with inflation showing no signs of dissipating, brands should be focusing attention on where the most effective point of engaging with consumers is. They should avoid the temptation of funnelling all money to online channels and take advantage of the myriad of consumer touch-points available to them, especially where measurability has made great advances.”

This was echoed by Mo Moubayed, co-founder and co-CEO of Veridooh who pointed out OOH’s 13.7% growth year-on-year was almost double that of search in the same period, reflective of strong audience numbers returning and the improvements in technology within the sector.

Social media, included within online display, and broadcast video-on-demand (BVOD) also registered adspend growth over the quarter of 4.4% and 4.2% respectively.

Meanwhile spend on search over Q3 2022 rose by 7.7%, constituting nearly 40% of total UK adspend during the quarter.