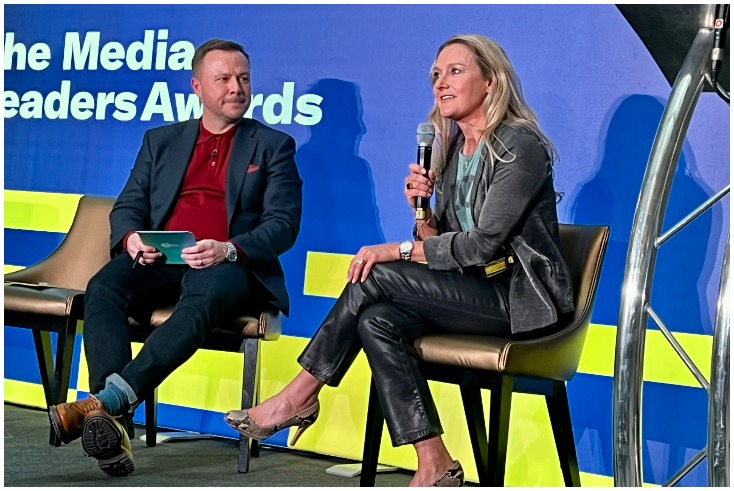 Winners of Mediatel’s Media Leaders Awards 2022 were announced yesterday at an in-person ceremony in London combined with the exclusive The Year Ahead event.

The awards featured 14 categories for 2022 with Zenith Media UK, Mediahub, Havas Media Group, UM UK and Wavemaker UK all shortlisted in the Media Agency of the Year category, while Channel 4, TripAdvisor, TikTok and Future Publishing all competing for the crown of Media Owner of the Year.

Other categories included awards for advertisers and technology businesses, plus Leadership Team of the Year and Campaign of the Year.

Greg Grimmer, CEO of Mediatel and 20 judges decided the shortlist of entries including representatives of the industry’s main trade and marketing bodies, media owners, brand marketers, and The Media Leader editor Omar Oakes.

Read on to find out which of the shortlisted nominees were crowned as this year’s Media Leaders of the Year with judges’ comments.

Grand Prix: CEO of the Year (Combined with Media Leader of the Year: Agency): Rachel Forde

She dedicated it to her team and her family and upon winning she was interviewed on stage by Craig Tuck, chief revenue officer of The Ozone Project (pictured, main left).

Paul Bainsfair, director general of the IPA and one of the judges, said of her win: “Rachel Forde is a stand-out exemplary leader. She is commercially astounding – having turbo boosted UM’s annual revenue under her leadership. Coupled with this, she is committed to ensuring the best interests of her clients, her staff and individuals in the wider industry. From mentoring diverse talent to narrowing the gender pay to achieving gender equality on the board, to her work with Nabs and Wacl, Rachel works tirelessly and highly effectively to make the industry a great place for us all to work.”

Media Owner of the Year: TikTok

Lauren Ogúndèkó, chief digital officer & co-founder, Bicycle London in her capacity as a judge said: “TikTok’s thirst to drive innovation in the social media space is hard to keep up with, which excites me. As a platform they have changed the way algorithms rank content, which has made the most unknown people become influencers overnight. The way they approach their partner relationships has also been very commendable… Other media owners have a lot to learn from TikTok, I believe they are rewriting the rules and challenging the status quo.”

Rachel Forde, CEO of UM UK, collected the award thanking her whole agency, her team and its culture for the win, citing media as a force for good as their main drive.

Category judge Dara Nasr, managing director of Twitter UK said: “What makes UM’s year more impressive is not just the account wins but their partnerships and focus on improving society. Their work with incredible organisations and people really stands out.”

Owen said it was a real honour and that she wanted to thank all of the young people who had come to her programmes and that she was just a facilitator of other geniuses in the media industry.

Judge Fredrik Borestrom, president, IAA UK, commented: “Ally has done amazing work with Brixton Finishing School and is helping to transform our industry to make it more diverse and inclusive but equally important, accessible, with her latest project, The AD-Cademy which is a free, virtual, nationwide gateway to the advertising, communications and marketing industries. It’s designed to change the blend of our future talent pipeline at scale, to deliver balance and inclusion and to upskill and enhance 2,500 talent’s outcomes.”

Chater joined Bloomberg Media just before the first lockdown in 2020 but Jo Allan, CEO, Newsworks said that he did not let this deter him.

Allan added: “Through a simple, clear three-step strategy he has turned around his division from decline to record revenue growth by putting customer services and team culture at the heart of everything. And it’s clearly paid off. Brilliant leadership.”

Jon Mew, CEO, IAB UK said of the win: “Jackie really stood out from her ideas to her delivery. Whether that be through her work building new teams, establishing a new way of thinking across the organisation and playing an instrumental role in landing new business and delivering award winning campaigns.”

Havas Media Group also collected Campaign of the Year at the event.

On winning this award Milka Kramer, country manager Pinterest UK, IE, NL and Nordics said it had felt like winning just to be nominated and that she was very proud of the work Pinterest was doing to make the internet a positive place.

Stephen Woodford, CEO, The Advertising Association commented: “I have been hugely impressed by the step change In Pinterest’s market presence and impact since Milka took the lead in the UK. We’ve seen a strong, positioning for the brand, and really creative and engaging industry communications which I am sure will be reflected in their ad revenues.”

Sherlock said that 2022 could be the year of gaming and thanked everyone for the award.

Omar Oakes, editor of The Media Leader (previously Mediatel News) said: “Lewis is well-known among digital media circles, but his stock rose even higher in 2021. He has been instrumental in bringing brands into the in-game advertising space in a compelling and credible way and I’m sure we haven’t begun to see most of the hard work he has done bear fruit yet.”

Advertiser Media Leader of the Year went to Lisa Walker, head of media and sponsorship at Vodafone.

Phil Smith, director general, ISBA said of the award: “Lisa is a powerful agent of positive change in the industry. She brings deep and broad experience to bear on the challenges of transparency, responsibility and accountability in media. As chair of ISBA’s Media Leaders’ Group she has played a pivotal role in shaping and driving ISBA’s priorities… her backing and active engagement have been vital to the progress that is being made against advertisers’ needs.”

Duncan Chater, head of media in Europe for Bloomberg Media accepted the award on behalf of his team.

Greg Grimmer, CEO, Mediatel Group said: “Bloomberg Media is a business I’ve long admired and this year they have much to be pleased about: record revenue growth, customer satisfaction scores to dream of and a people-centric culture that the leadership team personify”

Campaign of the Year: ‘O2 vs CO2’ by Havas Media

Patrick Affleck, CEO of Havas Media Group UK, collected the award for the campaign on carbon emissions the group did with telco company O2.

The campaign was launched to coincide with Earth Day on 22 April 2021 and was O2’s greenest ever media plan.

Chris Kenna, CEO & Founder of Brand Advance noted: “As a marketeer we want to see campaigns that mean something, as a father, I want to ensure we leave the world a better place than we found it, and as an ‘Air-Breather’ what’s more important than the environment remaining a clean, safe place to live. O2 vs CO2 was not only a clever campaign, but it ticked all those boxes, achieved fantastic results and all whilst having real meaning and purpose.”

Technology Company of the Year: The Ozone Project

Damon Reeve, CEO of The Ozone Project, which was a platinum sponsor of the Media Leader Awards 2022, thanked the judges yesterday after winning Technology Company of the Year.

Kate Rowlinson, CEO, MediaCom UK, who was also shortlisted for the Grand Prix Award this year and won last year, said this category was very competitive.

She added: “The Ozone Project stood out to me for an impressive year of growth across the business. Whether that was posting revenue growth and diversifying where that revenue came from, to their portfolio of products and platforms that has helped them grow their client base over 12 months, The Ozone Project continue to go from strength to strength.”

Advertiser of the Year: Tesco

Tom Mardon, media manager at Tesco, accepted this award on behalf of his team.

Lindsay Clay, CEO at Thinkbox, said: “Brilliant commercial success. Leading the way in representation in its advertising, variety and innovation in its media. Demonstrable effectiveness.”

Advertising/Media Technology of the Year: ‘A Divining Rod for Attention’ by OMD Worldwide

Peter King, head of TV research manager at OMD UK, accepted this award for Advertising/Media Technology of the Year yesterday.

OMD Worldwide developed a tool to measure returning attention over the course of the pandemic which would identify and then activate the best media opportunities for its clients. This was based on “on-the-ground, real-time 360 intelligence in local markets around the world”.

One of the judges, Sam Taylor, head of customer value at Direct Line Group, said he was really impressed by the entry from OMD Worldwide, especially given the changes in consumer behaviours over the pandemic.

“In just five weeks, [OMD Worldwide] identified and tapped into a real consumer need, building a global intelligence dashboard that was able to provide their clients the visibility to enable them to not only navigate this challenging period but to positively trade within it,” he said.

The full 2022 shortlist and Winners

Grand Prix: CEO of the Year (combined with Media Leader of the Year: Agency)

Future Media Leader of The Year

International Media Leader of The Year

Media Leader of the Year – Advertiser

Media Leader of the Year- Technology

Leadership Team of the Year

Campaign of the Year

Advertising/Media Technology of the Year

Media Agency of the Year

Technology Company of the Year

Media Owner of the Year

Advertiser of the Year

Media Leaders: The Media Leader‘s weekly bulletin with thought leadership and analysis by the industry’s best writers and analysts.
Sign up for free to ensure you stay up to date every Wednesday.

Dan Clays: agencies must innovate for growth and talent

Patrick Affleck: everyone doubted why I took Havas job during pandemic

Why Mediabrands’ Morris is offering free lunch and unlimited time off