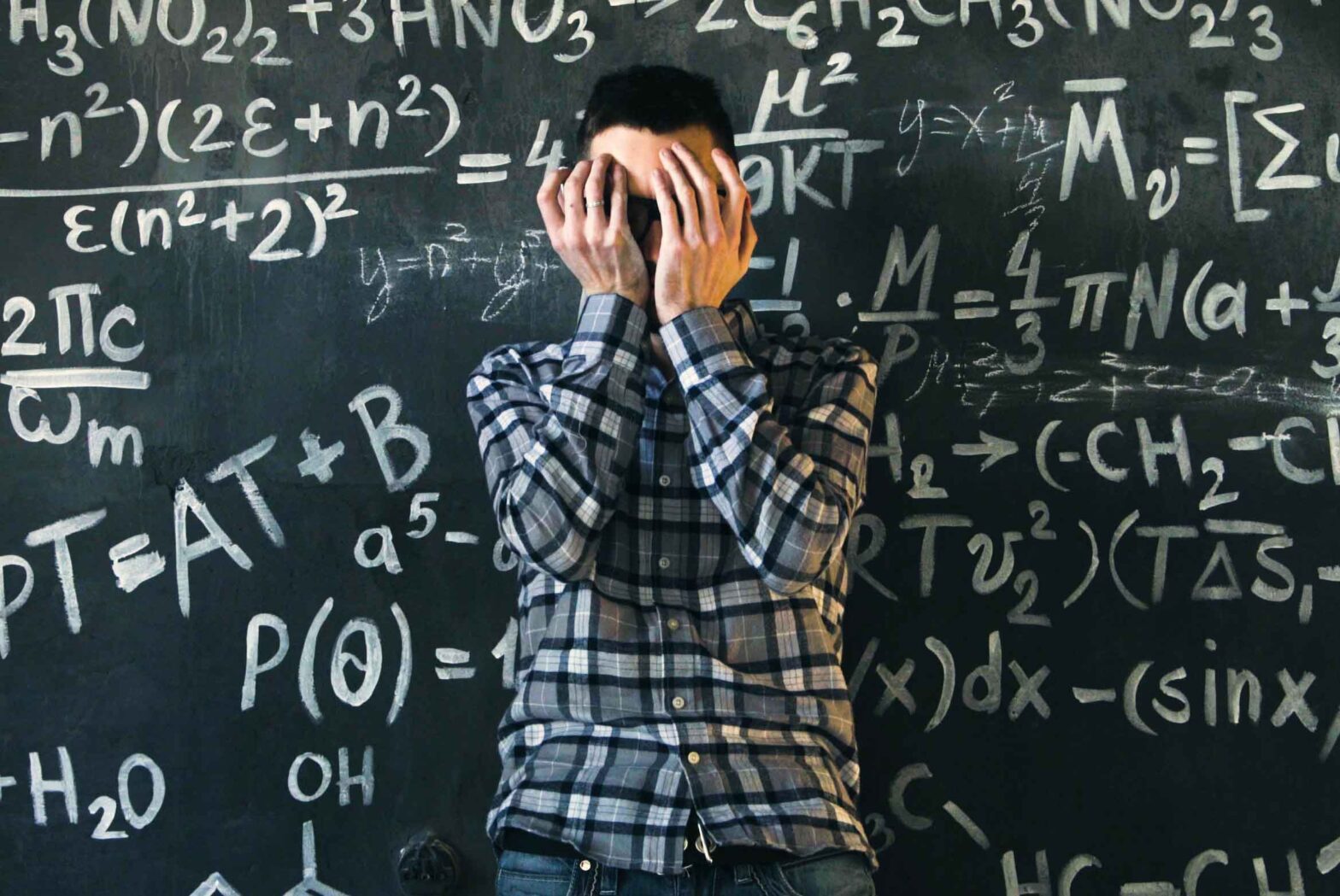 Despite trust being a major effectiveness driver, being in the most-trusted channels seems to have little impact on where advertisers spend their money.

I can buy media in any channel. I am completely objective. My only aim is to deliver the best business outcome possible for my clients’ brands using the investment they trust me with. I am sure that every one of my industry friends and colleagues will say exactly the same thing.

If you are like me and most of us media people, you will love a good graph.So, take a look at these.

Here’s one we are all familiar with –  where the money is going: 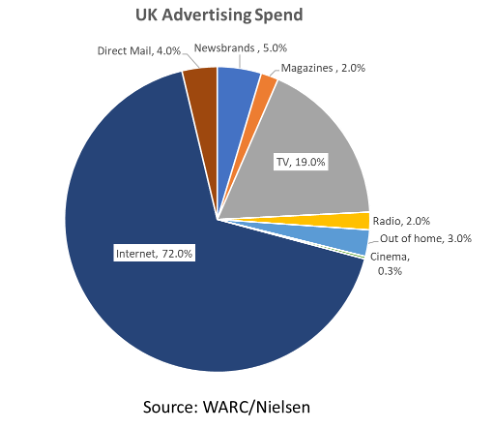 Clearly there is a lot hidden in that internet slice, and there is a lot of difference between search, social and digital display. But whatever the business objective of the client, the job of anyone planning and activating media is to place the spend where it has the maximum effect for the minimum outlay. So, on the basis of where the spend is, an outsider would deduce that the maximum effect must come from the internet.

However, we also know that a major component in advertising effectiveness is Trust. In media that means being in channels where the consumers trust the content and the ads.

There is much evidence of this. For instance, Professor of Neuroscience at the University of Münster, Michael Deppe, concluded that high trust context is three times as effective on communication as low trust.

But, unfortunately, as Morgan Housel puts it succinctly in his book The Psychology of Money –  ‘Marketing is increasingly cheap. Trust is increasingly expensive.’ So, you would think advertisers would spend money where they can find trust most effectively.

I’m not going to argue with Deppe or Housel, but amazingly this graph from YouGov would suggest that overall, if 72% of spend is on the web, then being in the most-trusted channels seems to have little impact on where advertisers spend their money. 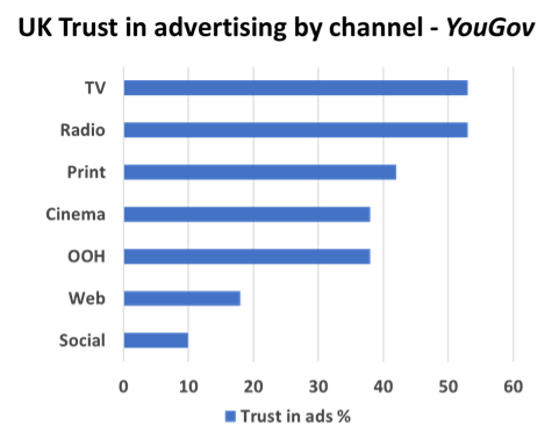 Next, we come to the much-overlooked area of Positivity. Richard Shotton in his book, The Choice Factory, which is a brilliant compendium of all things behavioural science, dedicates a whole chapter to mood and cites several compelling pieces of evidence that Positivity improves advertising receptiveness and recall.

Daniel Kahneman (Nobel laureate and author of Thinking Fast and Slow) offers an evolutionary explanation about how we are hardwired i.e. that being in a good mood equates to the absence of danger (think sabre-toothed tigers), thus mitigating the need to think critically, allowing cognisant bandwidth for communication. This is a view firmly reinforced by Barbara Frederickson in her 2009 book Positivity, where she concludes that a positive mindset makes us more open-minded to new ideas and therefore more resourceful and resilient.

If “positivity” makes such a difference, then media spend must be going to the most positive environments. Well, no, not really.

A recent piece of research entitled The Power of Positivity, commissioned by Hearst UK and conducted by WPP’s very clever Theobalds Road Consulting, lays out where people find the most positivity in media environments, and equally where there is the most negativity.

Not amazing news for some newsbrands, which I suppose is understandable given the content, but at least YouGov say they are trusted.

Also, this more granular level starts to pull apart the social channels, with Instagram being seen as less negative than Facebook.

Sadly for Pinterest, it was not on the survey despite claiming to be “the last positive corner of the internet”. YouTube is seen as pretty positive, and that seems to align with channels where consumers make active choices about the content they see or hear, such as radio and Spotify, Sky Atlantic and the premium end of the magazine brands.

OOH isn’t in the survey for obvious reasons, but you can see how the Positivity Index might be applied to compare maybe the tube to roadside posters, or shopping mall panels perhaps. Where do you feel most at ease, or most likely to meet a sabre-toothed tiger?

Lastly, we come to the star of the last year or two, Attention. Professor Karen Nelson-Field, author of The Attention Economy and a columnist for this publication, simply puts it as “lower attention platforms drive less mental availability”. And we all know the importance of mental availability.

It is fantastic that focussing on attention, rather than viewability or other such fallacious measures, has had such a resurgence. Below is a chart from Lumen Research, which shows relatively where most attention is to be found, and that their MD Mike Follett usually summarises along the lines of “TV and long form video act like TV, and everything else acts like a poster”. 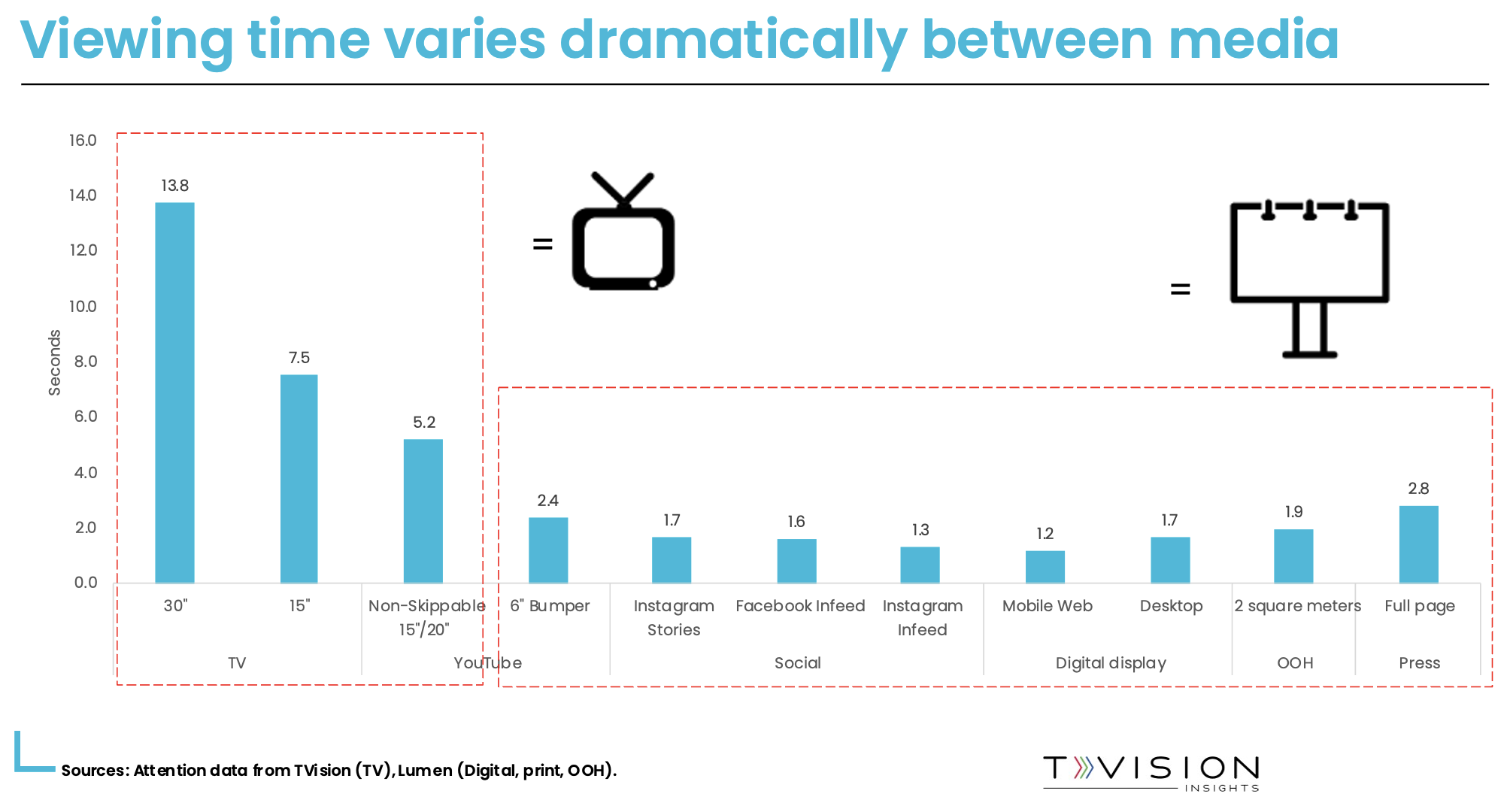 And for the traders among you, with the help of Ebiquity Follett answers the obvious point about cost efficiency. 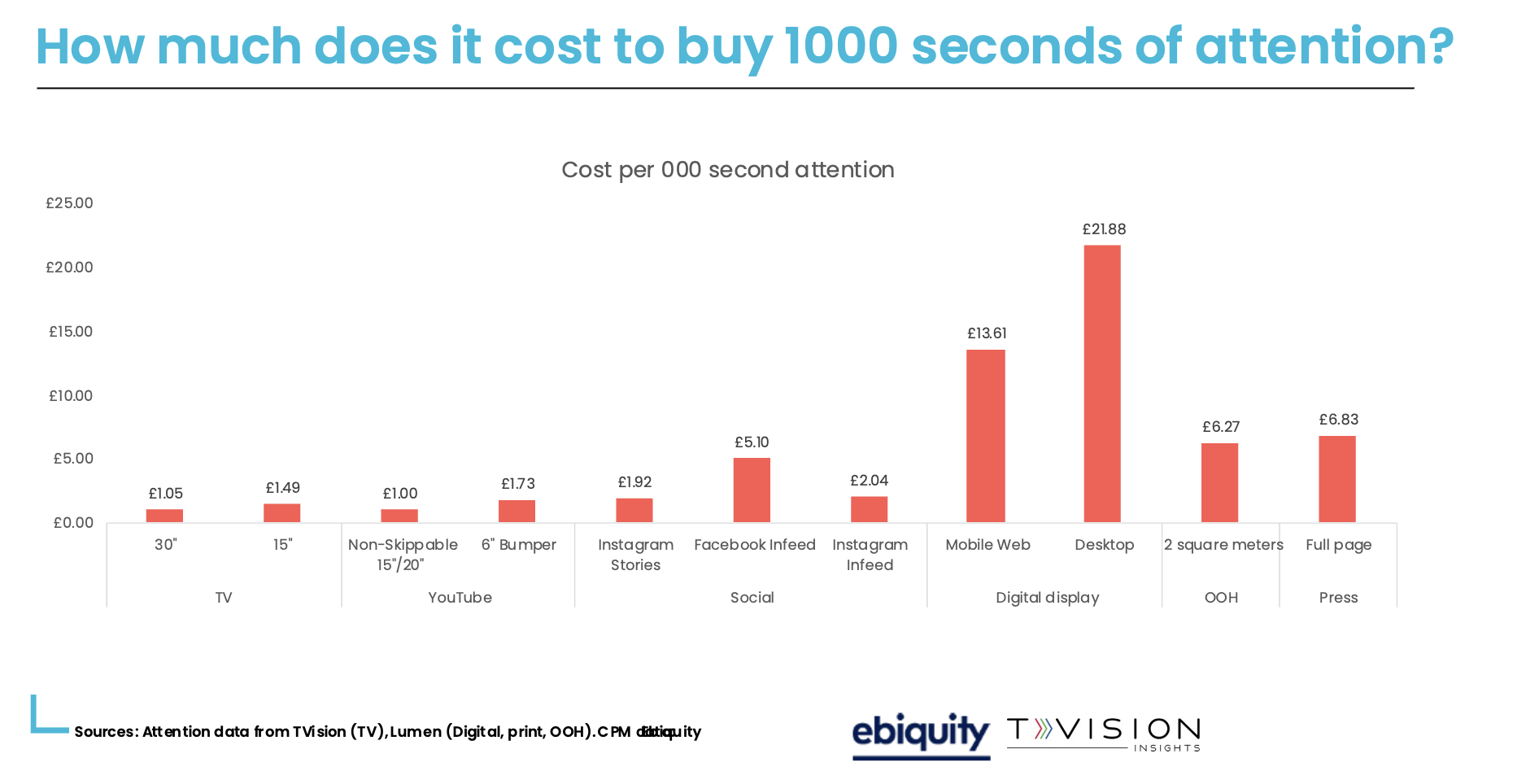 So, there are a number of ways to buy cost-effective attention. Some agencies have taken on attention as their North Star, and have created some very clever ways of optimising and trading based on attention. Admirable, but one-dimensional I’m afraid, and Follett agrees that we need to go further.

Only by considering all of the above – the fundamental pillars of Trust, Positivity and Attention –  can you ensure that your ads are going to have maximum effect.

Think about that the next time you are spending 72% of your budget in digital. It just doesn’t quite add up.

Danny Donovan is CEO of Build Media, a new media agency with a stated aim to be a positive force in the advertising and media industry.

John, Planner , PhD , on 30 May 2022
“Just read an econometric report and then ask… why TV?”
Steve Cox, Director of Marketing, JCDecaux UK, on 30 May 2022
“Interesting article Danny. You’ve highlighted a key reason why we think advertisers should be considering the addition of the “public” OOH screen to their ”private” screen digital activity. It seems entirely intuitive that a message conveyed via a big, bold city-centre platform should be more trusted. As Justin Gibbons wrote in “P2+C=5” last year – “You can’t tell lies in public”. Or maybe you can, but it’s much harder to get away with it!”
danny donovan, CEO, Build Media, on 30 May 2022
“Thanks Mark. Two great studies. Although it is equally true that they also use a number of highly intermediary kpi's such as reach, and they also include positivity. But ultimately I think ebiquity and I (and I am sure the Radiocentre) are going in the same direction on this subject.”
Mark Barber, Planning Director, Radiocentre, on 30 May 2022
“Interesting article Danny, although you could argue that all of these are still just intermediary measures of potential effectiveness. I'm not saying they shouldn't be considered but ultimately shouldn't planning be focused on media proven to deliver the best outcomes, based on analysis of publically available evidence? For a neutral perspective on this, may I recommend these two studies: 1. Re-evaluating Media (Ebiquity 2018): https://www.radiocentre.org/re-evaluating-media/ 2. Re-ealuating Media for Recovery (Ebiquity 2020): https://www.radiocentre.org/research/re-evaluating-media-for-recovery/”