From Watergate to weak: The Times' missing Boris Johnson story is a sorry affair 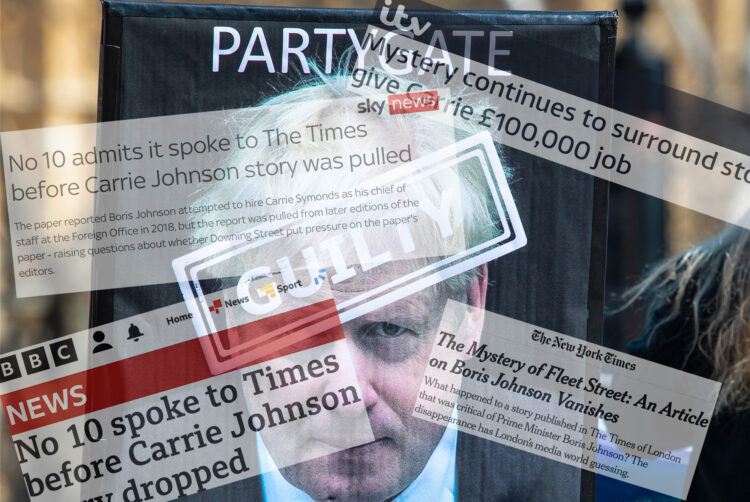 The paper once known as The Thunderer looks weak after pulling a story about yet more Boris Johnson allegations without explanation.

Last Friday was an important date in the history of politics and journalism. It was the 50th anniversary of the break-in at the Watergate complex in the US capital –  the opening shot in a torrid battle that led to the resignation of President Richard Nixon.

As those of a certain age will know, Nixon was brought down, in large part, by the dogged reporting of Bob Woodward and Carl Bernstein. The Washington Post reporters were helped by the confidential revelations from Deep Throat, a government official appalled by the illegality of the Nixon administration.

Woodward and Bernstein may have emerged as the “stars” of the show, but their late editor Ben Bradlee and publisher Katherine Graham were just as important. Both stuck with the story, and their reporters, when they were getting enormous abuse and grief from the top levels of the American administration.

It seems like a comforting story from another age –  hard-working reporters dig deep, expose the truth, and the bad guy, accepts (sort of) his culpability and under pressure decides to go.

As the Post put it last week: “Watergate, along with the Vietnam war, marked a dividing line between old and new, ushering in a changed landscape for politics and public life –  from a period when Americans trusted their government to a period in which that trust was broken and never truly restored.”

Nothing to see here

Since then in the US they have had Donald Trump, who still apparently believes his second term was stolen despite the 74 million people who voted against him. In the UK we have had Boris Johnson, who routinely shrugs off lies and misdemeanours that are too numerous to mention.

On that same evening as the Watergate anniversary, the UK’s own paper of record The Times (often referred to by Americans as “The Times of London”), was doing its bit for journalism in a very different and much less honourable way.

Some time after the first edition went to press and put out into the newspaper delivery system taking it to places such as Northern Ireland and the West of England, a story was removed.

This story alleged that in 2018, when Johnson was Foreign Secretary, he tried to install his then mistress (and now wife), Carrie Johnson, into the position of chief-of-staff of the Foreign Office at a salary of at least £100,000.

In later editions (including my copy) the Johnson story, by the hugely experienced political reporter Simon Walters, was replaced by a very strange article suggesting that Home Secretary Priti Patel believed the European judges who had blocked her Rwanda refugee flights were racist.

We know little more for certain, although it is widely believed that Downing Street, who had known the story was about to appear for at least 48 hours without issuing either an on- or off-the-record denial, applied pressure. It seems there were no late-night injunctions (super or otherwise), but there was a denial coming from Mrs Johnson’s side of the fence.

It is possible that the acting editor on the night, Tony Gallagher, was advised to pull the story for legal reasons because of the outright denial.

Whatever the reason, The Times has said nothing publicly by way of explanation. The paper once known as The Thunderer looks weak, pusillanimous, and more than a tad untrustworthy.

It apparently took just one call from a Downing Street official or press officer to try to shut down a story that is mightily in the public interest and which Simon Walters says he stands by.

But all that is merely the tip of the iceberg.

In the internet age, it is impossible to suppress a story for long. Indeed, such efforts have the opposite effect by stimulating thousands, if not millions, to make the effort to find a story that might otherwise have passed them by.

It has been called the Streisand Effect, after a privacy lawsuit launched by singer Barbra Streisand against an aerial photographer who had taken thousands of pictures of houses –  including the Streisand mansion –  to illustrate the perils of coastal erosion in California.

Before the lawsuit, six people had downloaded the Streisand picture. Within a month more than 400,000 had.

The news of the missing Times story has spread exponentially and has been picked up by broadcasters and travelled around the world.

“Curiouser and Curiouser” was how Newsnight’s Kirsty Wark introduced an item on the missing story in which Nicholas Watt told how Walters “was nothing if not thorough” and would have properly checked his story.

The New York Times, also centrally involved 50 years ago in reporting the Watergate affair, was also intrigued. It ran the headline: “The Mystery of Fleet Street: An Article on Boris Johnson Vanishes”.

Adding to the confusion, the paper reminded us, most of the details of the allegations were not new and had appeared in Lord Ashcroft’s biography of Mrs Johnson: First Lady: Intrigue at the Court of Carrie and Boris Johnson.

Ironically, excerpts from the book appeared in the Daily Mail and the Mail On Sunday, yet a follow-up of the Times story (before it went missing) appeared in the MailOnline before it, too, was removed.

For any previous UK government, such a serious allegation against a sitting prime minister would be a matter for urgent investigation, perhaps by a government ethics adviser. It would be a resigning matter if found to be true.

Indeed Lord Geidt, who recently quit the role, says the ‘Boris and Carrie’ allegation was a matter “ripe for investigation.”

Alas, there are so many Johnson scandals they just continue to pile up like yesterday’s forgotten rubbish.

But, at the very least, all those involved should be aware of the Streisand effect, the speed with which screen grabs of first-edition articles can travel and The Times should have a greater care for its reputation.

At least one journalist has set an unambiguously good example this week. Dmitry Muratov may have had to close Novaya Gazeta, the opposition newspaper he edited, but he has still made a huge difference by selling his Nobel Peace Prize medal for £84m to enable Unicef to help children displaced by the Ukraine War.

Such a great story is sure to get decent coverage in The Times.