Could anyone be a media legal correspondent? 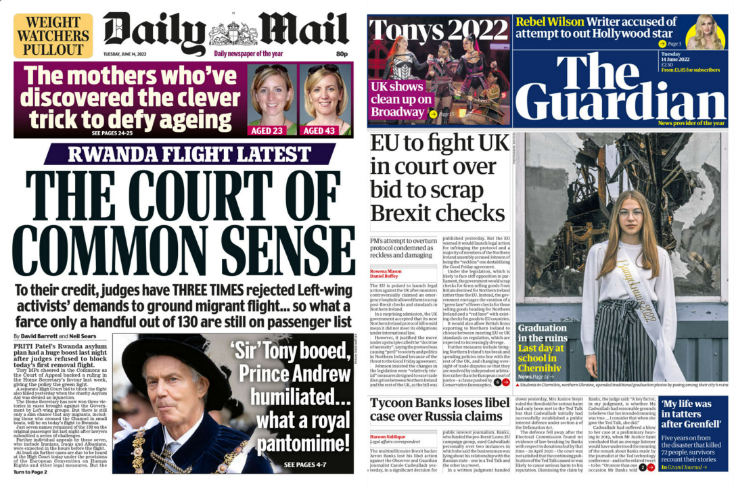 News desks should be looking for a new generation of now endangered media editors and correspondents to report from the front line.

It has been a great week for media legal correspondents –  to the extent that such a sub-species of journalism still exists.

Three big stories coming all at the same time had either a predominant or substantial legal element.

First, there was Cadwalladr’s libel victory over arch-Brexiteer Arron Banks, followed swiftly by the decision by the Court of Appeal against any intervention to stop asylum seekers being sent to Rwanda. Then there was the decision by Boris Johnson’s Government to set out detailed plans to overturn large parts of the Northern Ireland protocol in breach of an international treaty signed by Johnson and the British Government. Legal action will not be far behind.

All three stories are immensely complicated with serious implications for the running of both government and democracy in this country and need detailed knowledge to unravel.

The BBC has a legal and home affairs correspondent –  as does The Guardian – but the stories seem to have been covered by a mixture of political editors, policy editors and even one of few remaining examples of the endangered species – the media editor of the Daily Mail, Paul Revoir, plus a number of general reporters.

Without conducting a detailed scientific survey, there is a distinct impression that more and more journalists are being forced by the straitened economics of media models to become jack-of-all trades at a time when their readers, listeners and viewers are, in general, becoming more knowledgeable.

Anyone can read what used to be called “the cuttings,” lift a few quotes from the Press Association and Twitter and construct a plausible news story against the clock, but is there the danger of a loss of subtlety, depth and sometimes accuracy?

Is there anyone who can today compare with Joshua Rozenberg during his years of reporting the law for the BBC and The Daily Telegraph –  a journalist who was also a qualified solicitor?

Media editors have become fewer on the ground at a time when it could scarcely be more important to reveal how information is created and in whose interests, at a time when there is an almost existential threat to democracy, and from the endless generation of information that is false, misleading and sometimes downright dangerous.

Where, for instance, is the general outrage that Rupert Murdoch’s Fox News has given up any pretence at journalism and has failed to cover the activities of the Congressional Committee investigating the events of January 6 2021 in the US Capitol? Instead Fox is now even more blatantly aligning itself with Trump’s false “stolen election” narrative for pieces of silver.

Journalistic titles may not matter much in the end and there are fashions in what is considered important and relevant. In an age of strikes and three-day weeks, industrial editors were once near the pinnacle of the journalistic tree only for the role to be downgraded and almost pass away.

Now, when the country is heading for a summer of discontent and the possibility of something approaching a general strike, journalists with industrial contacts and background knowledge may be thin on the ground.

From ‘Enemies of the People’ to ‘Court of Common Sense’

As for the three legal stories; Cadwalladr, Rwanda and the Northern Ireland protocol, all the different flavours are there in the reporting depending on the media outlet.

The coverage in the Mail is by far the most multi-faceted and in some ways surprising. You would expect the Mail to be very sniffy, at the very least, about Carole Cadwalladr of The Guardian and The Observer who was sued for an attack on Banks, a major donor to Leave.EU, a cause dear to the newsbrand’s heart.

Not a bit of it. The paper was happy to highlight the views of the Society of Editors that Cadwalladr’s victory was “a hugely important victory” for Press freedom.

In particular, the High Court ruled that Cadwalladr had succeeded in establishing a public-interest defence.

Not all judges allow journalists the benefit of having a public interest defence in the face of the rich and powerful who are so adept at using England as the libel capital of the world.

The Guardian’s legal affairs correspondent Haroon Siddique described the win “as a timely shot in the arm for public interest journalism” (pictured, above).

The Sun managed a single paragraph on such an important story.

The Mail (pictured, above) was back on more familiar territory when it came to judges and Rwanda. Forget the “Enemies of the People” who ruled in 2016 that the consent of Parliament was required to give notice to push ahead with Brexit. These were good judges who on three separate occasion had rejected the demands by “left-wing activists” to ground the migrant flights to Rwanda, which may now take place.

Now, the “Enemies of the People” had become miraculously transformed into “The Court of Common Sense.”

And then there was no flight at all and judges became bad again in The Daily Mail which denounced the “meddling judges of Strasbourg” at the Court of Human Rights who “scuppered” government plans at the last moment.

Actually the view of this non-lawyer and non-legal correspondent is that the application of common sense would surely have resulted in the postponement of any such flights until the full hearing into the legality of this Government manoeuvre is heard next month.

Until then, it would be a useful first step for the media to stop echoing victimisation of asylum seekers as “illegal immigrants.” They are not illegal until proven to be so and there is no obligation for them to stay in the first “safe” country they reach over the claims of family already in the UK.

You also don’t have to be the Archbishop of Canterbury, or any of the other 22 bishops who wrote to The Times condemning the Rwanda deportations as “ an immoral policy that shames Britain” to think it is wrong to send a 19-year –old Afghan with family already in the UK to Africa.

The EU will go to law –  more work for the legal correspondents, diplomatic and political editors and Whitehall and policy editors everywhere.

In the meantime, media news desks should be looking for a new generation of industrial correspondents to report from the front line of the coming confrontation in industrial relations.