Should podcast be taken as its own channel? 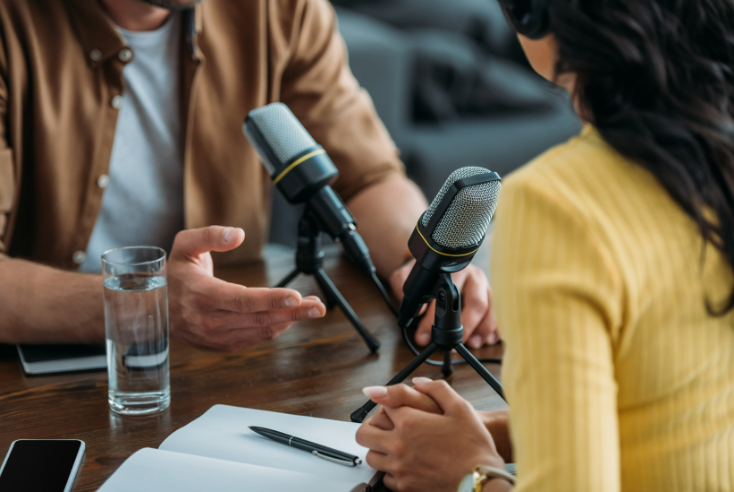 Podcasts have been growing in popularity among new audiences and advertisers alike over the last few years, but should it be taken as its own channel separate from radio?

When asked in a panel how audio can justify higher CPMs at Mediatel’s Future of Audio conference, Sam Austin, head of audio at Goodstuff Communications, and Emma Dibben, head of publishing and partnerships at Wavemaker, agreed that advertisers needed to look at what they were aiming to achieve with their use of audio as linear and streaming radio and podcasts command different CPMs but “do completely different jobs” in terms of reach and targeting.

This raises the point whether podcasting should be thought of as a separate entity to radio, rather than being combined with other audio in a media plan.

The latest IAB Listening Britain report from winter 2021 found 33.2 million people listen to online audio weekly with an average of 13 hours spent weekly across age demographics listening to online audio. The reach for each type of audio broke down into 36% on-demand music services, 31% total live radio via IP, 20% total podcast downloads and 10% any catch-up or listen again radio.

Michael Bayston, global head of automation at Acast, told The Media Leader advertisers now see podcasting as “here to stay” and the next step would be for advertisers to agree that podcasting should be its “own channel”.

He explained: “If you’re a comms planner, and you get insight and research into audiences about where they’re spending their time, you cannot lump radio and podcasting together. They’re completely different, particularly in the ad creative and the amount of time that has been spent on podcasts. Surely we need to get to a point, and I know some comms planners are doing this already, where they are specifically saying we’re going to give 5% of this budget to a podcast, because we know this audience is spending 5% with these podcasts, and they can name the podcast they’re spending time with as well.”

Charlie Brookes, director of revenue at Octave Audio said podcasting being treated as its own medium is already happening with advertisers.

He commented: “Previously podcasts may have been rolled into a buy as part of a larger audio plan, but increasingly it’s now treated as its own medium – a medium with its own unique set of attributes and benefits.”

Some examples of these benefits include higher ad recall and engagement thanks to the more intimate experience of listening to podcasts alone through headphones.

Acast found in a study called The Attention Economy that 64% of those surveyed paid full attention to podcasts, compared to 49% for music streamers and 44% of radio listeners.

What has changed in podcast advertising?

Describing podcasts as a “maturing channel”, Bayston pointed to “a wide range of ad tech” that has grown up in the last few years around programmatic, measurement, and targeting in podcast advertising that has shifted advertiser perceptions.

First-party enabled data targeting, pixel-based attribution measurement, and keyword and sentiment conversational targeting are some of the developments that are happening in the podcast advertising industry and there are now several podcast advertising formats to choose from, including host-reads, to audio ads, sponsorship, and branded episodes and series.

Bayston highlighted how Acast invented dynamic ad insertion, which has since been copied by others, to be able to insert audio ads and host-read ads into relevant moments in real-time and previous episodes of a podcast.

He added that podcast measurement has also become “more robust” with the ability to track onsite user behaviour after exposure to an audio ad, stating: “Advertisers now understand the power of podcasting and the relationships they can build with listeners which has made the medium a more compelling solution to increasing investment confidence.”

He explained, as the pandemic hit marketing budgets, he saw a trend of advertisers pivoting, depending on the brief, from a high coverage and frequency plan to a much more targeted reach.

Halliday added that DAX can overlay first-party and behavioural data into a podcast campaign, which he said makes it “more targeted and effective”.

Campaigns can be targeted through age and gender demographics, ethnicity and passion points among other characteristics, and additionally agencies can buy by genre verticals like comedy, audience verticals or specific podcasts like My Therapist Ghosted Me, Parenting Hell and How to Fail by Elizabeth Day.

Halliday gave an example of how Estee Lauder could dedicate a percentage of their budget to “drill down” into a target audience, for instance female 18- 24s, which DAX could provide with their “data-driven approach”.

The targeting capabilities of podcasting make it “very appealing” for advertisers he commented, adding: “We’re ticking boxes for creativity and integration and innovation, and audience accuracy as part of a wider coverage and frequency play as well, so they’re quite versatile.”

DAX is also looking at contextual placement and brand safety with partners like Oracle and has developed DAX’s Listener ID and brand metric case studies to provide advertisers with more understanding about behaviour and perception after hearing the creative from a podcast ad.

Halliday mentioned Global was planning to diversify into other types of audio, not just podcasts, including audio articles and in-game audio advertising.

Audio articles can be read aloud with thousands of different voices through AI machine learning, via an acquisition of a company called Remixd. It is currently being trialled on The Daily Mail, while Global has entered the in-game audio advertising space through an exclusive ad sales deal with Odeeo.

On top of these new tools and products, podcast publishers and agency sources have told The Media Leader they are seeing changing demographics and listening behaviours.

Data from Statista puts the number of people listening to podcasts in the UK in 2022 at 21.2 million people, and this is projected to grow to 28.1 million by 2026.

Lucy Barrett told delegates at Mediatel’s Future of Audio event that 10% of all listening in the UK is now done via smart speakers, including radio, streaming and podcasts.

Other delegates at the conference spoke of smart toothbrushes and even fridges that can stream audio, and highlighted 85-90% of podcast listening is done through mobile.

Bayston revealed there has been a growing number of older listeners, particularly in the 40s, 50s, and 60s age brackets and Acast’s fastest-growing podcast verticals are in gardens, home, and business.

IAB Listening Britain data supports this finding, showing share of listening among over 55 category has gone from 24% in spring 2020 to 30% at the end of 2021, indicating that older demographics turned to online audio during the pandemic.

Acast, the world’s largest independent podcast company, also found in a recent survey with Nielsen of 2002 UK and Irish adults that 45% of listeners to podcasts started listening within the last year, rather than during the peak of the pandemic with national lockdowns in 2020 and early 2021.

IAB digital audio adspend figures from last year showed podcast spend grew from £23m in 2019 to £33m in 2020 (43%), accounting for most of digital audio revenue growth. 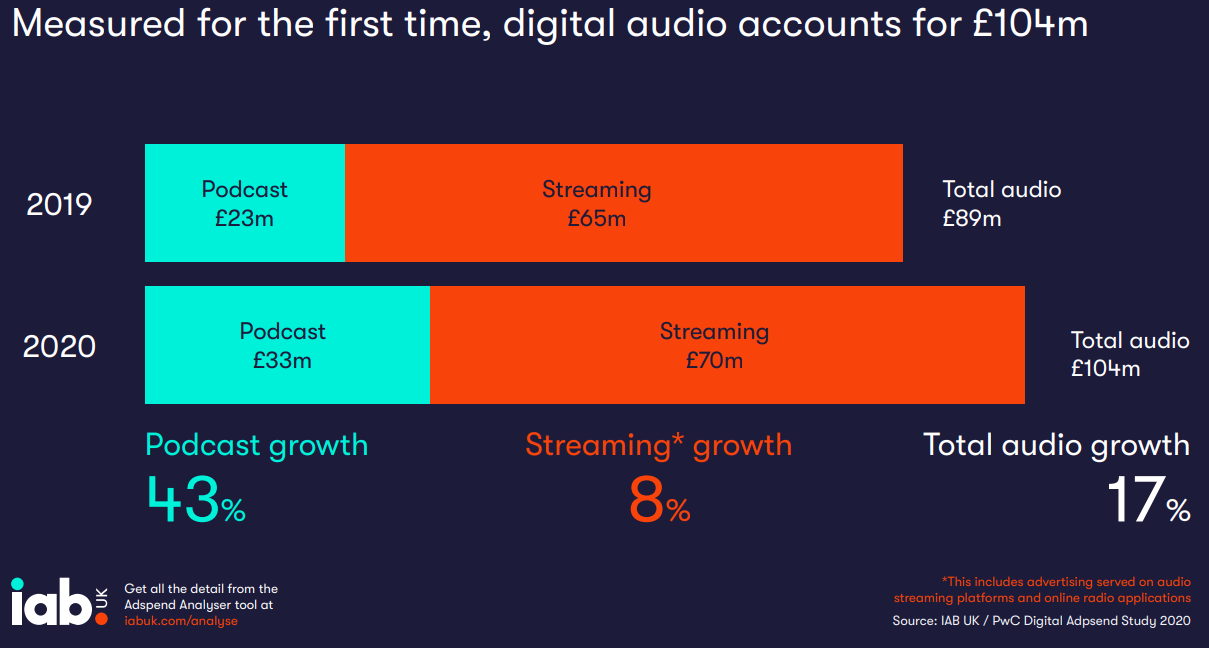 These spend numbers were calculated from submissions to cover all of the main podcast companies in the UK market, plus modelled data for Acast and Spotify aided by the IAB / PwC Advisory Board and corroborated with additional third-party data and industry interviews.

Digital audio revenues also increased 500% to £4.2m in Q1 2022 year-on-year according to the latest Digital Publishers’ Revenue Index (DPRI) from the Association of Online Publishers (AOP) and Deloitte, indicating a new “golden age” for podcasts in terms of demand and output.

However, at the beginning of the pandemic, Bayston said advertisers started to “panic” and wanted to pull their campaigns. But Acast had seen data that even in the early weeks of lockdown there were growing audiences, not declining, and used this information to reassure advertisers.

“We’re seeing those advertisers that previously were working with podcasting are doubling down on it, which is a really good sign that shows the maturing of the channel, but we’re seeing some verticals that I would say have been very associated with radio, piling into podcasting, like retail and automotive,” said Bayston.

He also said business-to-business, finance and direct-to-consumer brands were increasing their advertising on Acast’s podcasts.

Tony McAllister, partnerships development director at Global, said one of the “big things” the partnerships’ team is seeing is just how many mainstream advertisers are coming to podcasts.

He listed the likes of GiffGaff, Tesco, Dacia, and British Airways getting involved in sponsoring different podcasts and host-reads, but said clients could be looking at a “huge” podcast campaign as part of a multi-million pound brief going across Global’s outdoor and audio properties, or a £15k budget dedicated solely to spot advertising on a podcast.

Global now has 900 podcasts in its roster and a team of podcast experts sitting within its partnerships team to “champion” the medium to clients and agencies.

Its highest-rated podcast is getting two or three and a half million downloads a month, Halliday revealed, and that is before ex-BBC journalists Jon Sopel and Emily Maitlis, previously co-hosts of Americast, launch their own podcast with Global later this year.

McAllister added: “It’s on a hell of a lot of briefs now podcasts, especially our partnership briefs, and I think what that’s doing is it’s meaning the potential for doing bigger, more exciting, creative advertising executions is bigger because the budgets are bigger on these big multi-platform briefs as well.”

He said on their partnership briefs they were seeing the word podcasts come up more and more. It reminded him of when advertisers wanted to do native and social advertising, didn’t really know what they were asking for, and yet nevertheless wrote native and social on their briefs because they wanted to know how it could work for them.

McAllister commented: “Everybody wants to advertise in podcasts, from loan companies to alcohol brands, and all of these things may have red flags. And again, what we do is filter those through and speak to the talent and make sure that they are happy with the delivery.”

He also highlighted repeat bookings as something he was seeing, in particular the brand Lego going on “a journey” from DAX advertiser to podcast spot advertiser to host-read to branded episode.

Future of Audio speakers and panellists acknowledged that discoverability is still a challenge with podcasts, with some speaking to perceived difficulties in scale and measurement as well.

To tackle “misconceptions” around scale, Brookes said: “Scale was previously cited as a barrier to advertising, but packaging podcasts into genres combines inventory that can then be offered to advertisers as a scaled approach to their planning. This is further helped by an increase in listening and podcast topic range to reach diverse communities that have been harder to reach within audio previously.”

Bayston said discoverability was “the final piece of the puzzle”, beyond listening technology and diverse content, but this issue was not unique to podcasting, but also applied to streaming TV and other mediums.

McAllister agreed discoverability can be a challenge for podcast advertising, and added that one of the biggest challenges he saw at Global was advertisers trying to “leapfrog” straight into doing big podcast events or creating their own podcasts, before they have seen the benefits of a targeted spot ad or 90-second host-read ad.