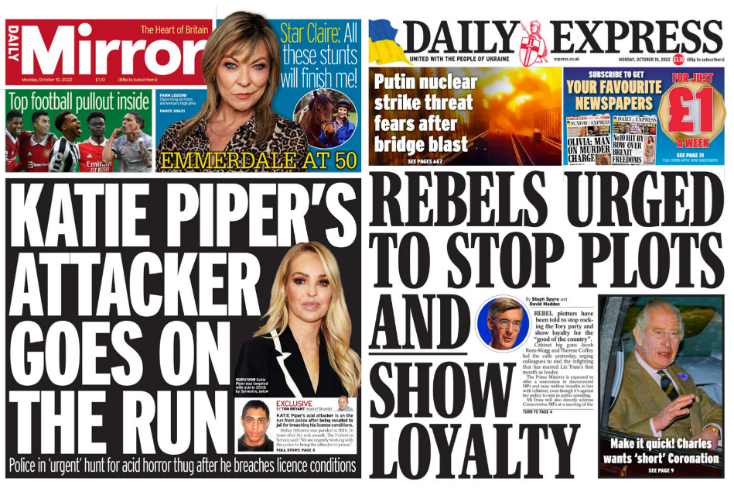 Reach’s group revenue, circulation and advertising in September was “distorted” because of the national mourning period, its latest quarterly financial results have revealed.

The national and regional publisher of The Daily Mirror and The Daily Express (front pages, pictured main image) reported group revenue for the third quarter of 2022 was down by 1.9% year-on-year. Reach did not disclose a monetary figure.

Within that, digital revenue was up 1.1% compared to the same period last year, print revenue decreased by 2.9%.

Reach split out July and August revenue from September because the last month’s revenue performance was “distorted by impact of HM The Queen”.

While circulation benefited during this time, a one-off rise of 4.3% and aggregate volumes on The Express and The Mirror increasing by 30% on the day following the Queen’s death and the funeral, there was “significantly reduced advertising” due to a blackout during national mourning.

Multiple brands delayed or cancelled scheduled campaigns with print advertising dropping by 32.2% in September 2022 compared to September 2021, compared to a decrease of 17.0% in July and August 2022 versus 2021.

July and August revenues were therefore dubbed “more indicative” of underlying performance with print down 2.8% and digital up 5.9%.

Reach attributed this to “ongoing momentum” in data-led initiatives, steady growth in page views (6% in the period) and “stabilisation” in comparative programmatic yields as headwinds from Q2 were “moderated”.

Additionally, newsprint inflation was “as expected” and cost management actions taken during the first half of 2022, such as reductions in print pagination and supply and operating model changes have helped “offset” inflationary pressure.

Reach’s total registered customer base is now more than 12 million.

Looking forward, the macroeconomic and political climate was still described as “volatile” and as a result Reach said it was “mindful” of the potential impact on consumer behaviour.

In Q4 2022, traditionally the strongest period for advertising, the expectation is that circulation revenue will be supported by increased cover prices and advertising revenue will benefit from the season, especially around Black Friday, Christmas and the Qatar World Cup starting in November.

Jim Mullen, Reach’s CEO, said of the results: “Actions on costs are helping to mitigate inflationary pressures and while macro uncertainty persists, improved revenue trends during Q3 are a positive. The strength of our balance sheet underpins ongoing investment in the strategy, as we continue to transition to an increasing mix of higher quality digital earnings.”

Over the last quarter Reach journalists have also voted to strike over pay disputes and potential US launches of The Daily Mirror and The Daily Express have been considered.

At the end of Q2 2022 Mullen warned of an “sector-wide slowdown” in spend because of the war in Ukraine.