Dean Windass, Piers Morgan and The Harvard Business Review: a parable for our times 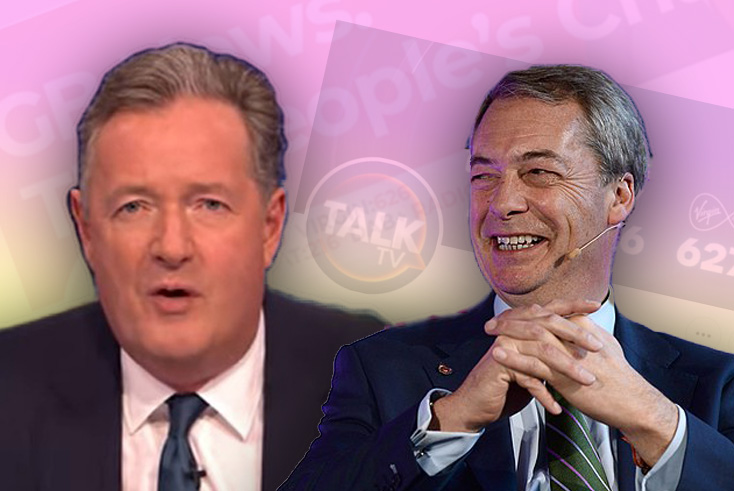 Without a mainstream platform, Piers Morgan looks diminished. Worse for Rupert Murdoch, the ‘global’ reach of his content is worth very little.

Our industry sometimes produces an outbreak of common sense among the daily diet of PR posturing. Never has a dose of reality been more needed than now, with the race to supposed first-mover advantage in the Metaverse and anything AI, VR or AR-related.

And while the ESG agenda is real, successive platforms feature our industry’s finest expatiating on their initiatives in ‘levelling up’ without there being much evidence of actual progress.

Genuine discussion about today’s advertising and media realties is surprisingly rare, as if talking about the real world was somehow…boring?

So it was a welcome surprise to recently find the august Harvard Business Review talking about current trends in advertising and stating “Why Marketers Are Returning to Traditional Advertising” by serious academics from Duke University and London Business School (no less). They came up with several reasons why there is a resurgence of demand for mainstream media, including the need to break through digital clutter, people’s trust in traditional media, the decline of third-party cookies and (surprise, surprise) doubts about digital effectiveness (who knew?)

You really don’t need to read the article as you could probably write it yourself, unless vested interests prevent you.

For me, it didn’t go far enough. You don’t need to be Byron Sharp to know that if you want to sell a lot of product, you need to advertise to a lot of people.

It is better to fish with a net rather than a rod if you want to maximise your ‘catch’. The industry fooled itself into thinking thousands of rods could do the same job because you knew what fish you wanted to catch (analogy exhausted, but we’re talking ‘personalisation at scale’-hopefully a concept that has finally expired).

Yes, mass advertising can be inefficient but on the basis that you never know who is going to buy your brand, why, where and when, you might as well do what many online-only brands do; go for broke in mass media. If I never see another TV ad for Cinch I would be happy.

These brands know that TV can have a dramatic effect on online traffic, especially when used alongside other online channels (take your pick), and they can measure its effectiveness. They, like so many traditional brands, just know that TV sells and it sells because it reaches a mass audience that responds via its channel of choice.

Maybe the HBR just found all of this too damn obvious to write about, but sometimes it’s worth repeating what we’ve known for decades because it’s still true.

But what, you are undoubtedly asking, has any of this got to do with Dean Windass and Piers Morgan?

Windass, for the uninitated, is not a Viz character but an obscure footballer who once scored a goal that helped secure Hull City promotion to the Premier League in 2008. Scant notoriety unless you’re a Hull City fan, and even then it’s now a long time ago.

Anyway, last week Nigel Farage interviewed Windass on GB News, as part of the channel’s attempts to move beyond the metropolitan ‘bubble’. No doubt several people in Hull would have been delighted and maybe even tuned in, but I doubt BARB noticed.

Farage, who is more used to hob-nobbing with Donald Trump in his golden office, would no doubt have enjoyed the experience and would not have been envious of Morgan, who really did get to interview the orange ex-president as part of the launch of Talk TV. The fact that Farage tried to spike the interview adds extra spice to the occasion.

Since then, of course, the audiences for Talk TV have subsided to a level that, well, you would have expected: somewhere between zero and 50,000 on a good day, and all the cross-promotion in Murdoch titles and outdoor won’t have shifted the needle.

Going viral won’t be enough for ‘radio on TV’

There isn’t much demand for news talk, especially if Ofcom correctly prevents a Tucker Carlson-type of social divisiveness (freely available online), and the great British Public are mostly not interested enough in current affairs to want to eat more of it than they already do. A lot of GB News and Talk TV is padding, and it looks and feels (and sometimes is) radio on TV. There’s not a lot to see, especially since low budgets reduce these channels to talking heads and not much more.

So, what is the connection between the HBR article and the Farage/Morgan nexus?

The answer is that TV works because it is a mass medium that relies on its ability to reach millions of viewers, whether it be for content or advertising, and to pretend otherwise risks falling into the trap of thinking that digital alternatives can produce the same effect.

No doubt GB News and Talk TV will dismiss their viewing figures as being only part of the equation, given viral distribution and online re-broadcasts. There is a grain of truth in this, but news TV only really works well when it’s fresh and, er, newsworthy. The reach of Morgan in Australia doesn’t really add much, especially given how fond of being lectured by Poms the Australians are. As for the US, I doubt they care much either way.

It’s also very hard to monetise online audiences, especially if you don’t have control over the distribution. The ‘global’ reach of Morgan’s content is worth very little.

Divisive characters such as Farage and Morgan rely on mass distribution of their messages in appropriate channels at appropriate times (much like brands). Without the mainstream media support he enjoyed (for example, on the BBC’s Question Time), Farage just looks like a has-been and Morgan, without a mainstream platform, looks diminished. Unsurprisingly people don’t especially want to hear from him at 8pm on a weekday when they’d rather unwind and watch something either mindless or entertaining.

Thinking that Morgan would be a ratings winner in an evening slot on an obscure channel somewhere down the EPG is akin to thinking that lots of digital ads can wholesale replace mass media.

Articles like this can sometimes look like a Canute-like attempt to hold back the tide and, worse, evoke accusations of my being an old media dinosaur. Yes, we all know that younger audiences are not tuning into linear TV and that reach is hard to achieve compared to former times, but these factors can be addressed differently.

Meanwhile, if you want to grow your brand and your business, mainstream media remain the best route and TV, in particular, retains its crown. Don’t take my word for it, just ask the big ecommerce brands.

And now, The Harvard Business Review.

Duncan Owen, Head of Insight , Craft , on 19 May 2022
“Hands-down the best article I've read on here since i dont know when? Connecting with the middle the mainstream and the masses gets precious little airtime in these days of targeting, personalisation and brands convinced it's their earnest duty to "take a stand..". This was refreshing to read (and even better it's written without the unnecessary left wing bias much of the opinion pieces here display.) Hope we see more of this.”
Charlie Makin, Managing Director, Pintarget Ltd, on 19 May 2022
“Viewing research by Samba TV in 4 major markets showed that 95% of linear all TV impressions are served to 55% of households, whereas the 45% of ‘light’ viewers received just 5%. So, half the population watch hardly any scheduled TV. But light viewers aren’t light viewers, they watch more than 5 hours of screen time a day, just not linear channels. They watch catch-up, subscription services, YouTube, TikTok plus a plethora of other services. We no longer live in a linear, channel culture, I agree that the lemming like obsession with digital only strategies has been counterproductive, but the solution isn’t to go back to what we had before. You can’t put the band back together, all media is now digital and connected, we can’t unpick it. At least 25% of shopping is driven directly by media, direct to home, and it’s an intricate shopper journey that requires intensive data planning. I think the nub of the issue is your statement ‘you never know who is going to buy your brand’, smart brand owners should know exactly who is going to buy their product and find ways to reach them and get them to buy more, using multiple channels. This isn’t feast or famine, you rightly identify why many digital only strategies fail, too often relying on over investment in FAANG media owners, with poor attribution and evaluation systems provided by media owners, only analysing the last click. It’s madness. But we have better data resources that allow us to understand precisely who core consumers are, we should have better ways of reaching them. The choice isn’t binary, there are many issues with last click driven digital strategies, equally muck spreader TV strategies might be great for established, multi-national brands, but pretty rubbish for fast growth start-ups. The issue is both are solutions in search of strategy, rather than the other way round. The answer has to be consumer first, driven by data and matching consumer behaviour to media they chose to consume. Rant over!”