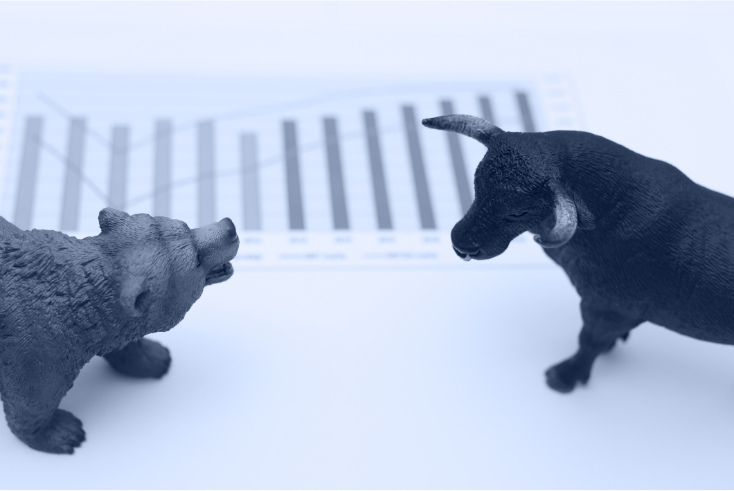 Recent bullish performances from more traditional networks and broadcasters is good news for both the industry and Dominic Mills’ share portfolio.

Adland observers who think we have been, ghoul-like, watching the lingering death of once-dominant-but-now-old-school entities — networks, broadcasters and the like — may have had occasion to pause in the last few weeks.

The latest results from the big networks, coupled with those last week from ITV, show that there’s life left in the old dogs yet, and that they aren’t going away without a fight.

In October, Publicis reported Q3 organic growth of 11.3%, and better still figures from its Epsilon and Sapient units; Omnicom 11.5%; Interpublic’s comparable figure was 15.7%; and WPP, as reported in the last week of October, also 15.7%.

The consistent message from all of them was that the figures amounted to more than just a Covid or cyclical recovery. Indeed, you could say that the pendulum, which looked to be swinging irreversibly away from them, is returning.

The same sentiment is also on show at ITV, which last week reported ad revenues up 30% for the year so far, and an expected increase of 11-13% for the full year.

And if you look at the respective share prices of WPP and ITV, you can see that investors were only to happy to put on their party gear.

At close last Friday, WPP’s share price was up 12.45% on the past month, with a part of that bounce coming from its near-total victory in the Coca-Cola shoot-out last week. 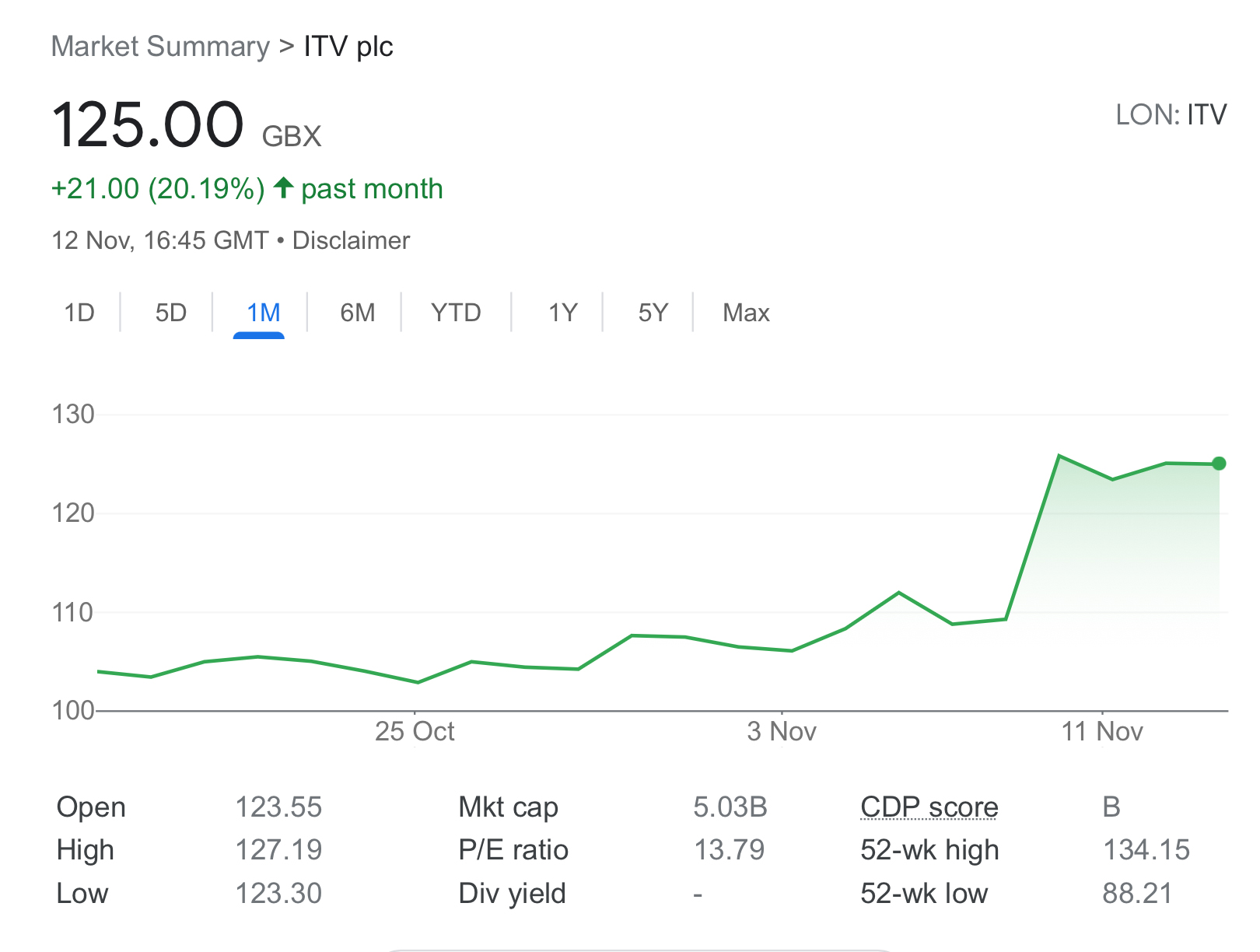 This is where it gets a bit personal. A few years ago I thought I’d have a bit of fun investing in the stock market. Sums were limited to what I could afford to lose.

As an amateur, I restricted my investments to businesses I knew and understood, including some media or media-related; where I thought they might get taken over at a premium (bless you Chime, if you remember that mini-conglomerate of which VCCP was a part, and Sky; and where I thought they were well-run but, to institutional investors, unfashionable) companies for which time would come again.

Hence the close interest in the share prices of ITV and WPP.  So hooray for their recent stock market rallies.

However, while I don’t expect any sympathy, I should also make clear that, that is where this particular piece of good news ends.

Despite their recent performance, both are well off their five-year highs. ITV is about 40% below the price I paid for it; and WPP about 12% lower. Good investments they are not. Still, I console myself with the thought that at least I didn’t buy Ebiquity.

So, from an investment point of view, the question is whether I chuck the towel in and take the losses on the chin, or stick. As I say, a first-world dilemma — but one I know shared by some who work in those businesses, who like a good moan about their options.

All of which brings us back to the pendulum. If it really is swinging back to the old school, then I might as well stick. Either the share price might improve, or they might get taken over — more likely for ITV than WPP, I think — or they might break themselves up so that the parts are worth more than the current whole (in this case, say, ITV Studios or GroupM).

Personally I’m encouraged. ITV feels like it is at last evolving in the right direction and, more encouragingly, advertisers seems to be falling in love with TV: for some, this is a renewal of vows, for others (online businesses, DTCs) it is new love.

Here are some stats from Thinkbox, showing that many advertisers who increased their spend in 2020 — taking advantage of low prices, in some cases — have more than kept going in 2021. Stand-out names include Unilever, Tesco, O2 and GoCompare. 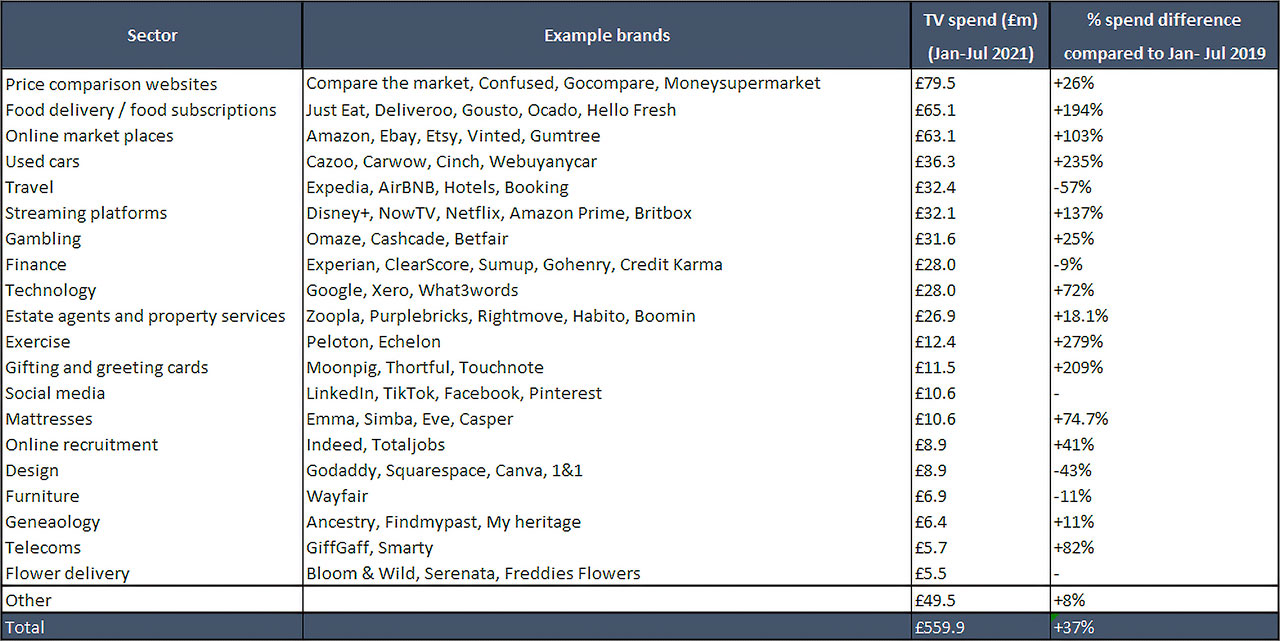 As for WPP, Coca-Cola is the latest in a series of big wins or holds — Unilever, Bayer, Deutsche Bank, for example — and, notwithstanding the loss of BA to an indie, Uncommon – suggests that the holding companies are finally getting their acts together when it comes to glueing old-type creative agencies with modern data- or digitally-driven entities (Wunderman Thompson, AKQA/Grey, VML/Y&R).

For some clients, the simplicity of working with one group with a one-stop shop arrangement — another seemingly out-of-fashion-idea — retains its appeal as Omnicom’s arrangement with Mercedes indicates.

Of course, it is true that even though the pendulum may be swinging back towards the old gang, that won’t necessarily or at all times be reflected in the share price. But it is enough to persuade me to hang on for the time being.

I forgot to mention that there is another reason. Yes, it’s totally childish but possessing the ability, face-to-face with someone from ITV or a WPP company, to say “As a shareholder…FFS it’s time you pulled your chuffin’ finger out” gives me a cheap thrill.