Ocean Outdoor CEO Bleakley: The ‘new normal’ was a mirage 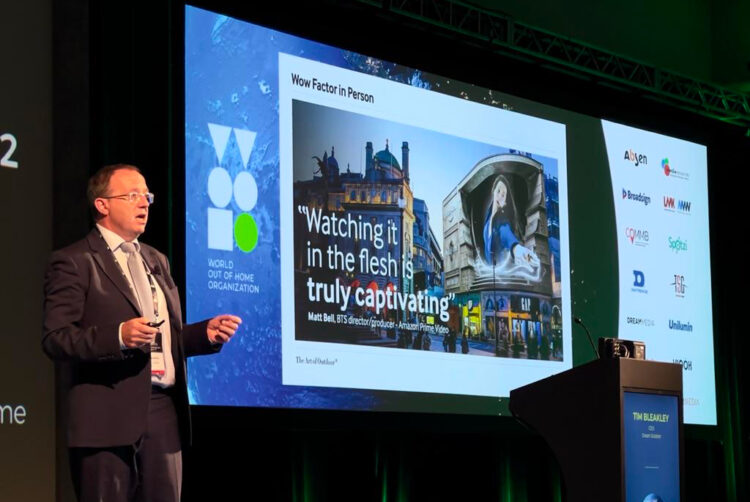 ‘We are whatever we choose to be’, Tim Bleakley argues at a pivotal moment for an out-of-home sector in recovery.

If you cast your mind back to the dark days of April 2020, when much of the world was rocked by a novel and deadly coronavirus, which images come to mind almost immediately?

In the UK, it could have been sunny walks in the park (it was suspiciously summery during the first Covid-19 lockdown), a sea of colleagues faces on Zoom, or the sight of Joe Exotic feeding slabs of meat to tigers.

It is also just as likely that a digital out-of-home screen is the most memorable image from those days despite the vast majority of people being forced to stay at home in the early months of the pandemic. The Queen’s message, featured on London’s Piccadilly Lights in April 2020, became a national beacon of hope of sorts for a country that had been plunged into crisis.

For Ocean Outdoor CEO Tim Bleakley, the company that manages the Lights for real estate owner LandSec, this activation was nothing short of being the “poster child for Covid”.

“You could probably count on two hands, the number of people who saw that image in Piccadilly, but it would be hundreds of millions of people who saw it worldwide across multiple media platforms. So there you go,” Bleakley smiles.

The implication being that there’s something intangibly special about the outdoor medium as a broadcaster for the masses. An insight that informs media strategist Justin Gibbons recent book P² + C = 5, which shows how advertisers can harness the power of the public screen alongside the private screen to drive effectiveness. Or a truism that finds its way into countless big-budget action movies (the ones where crowds of people are watching a news report broadcast on a massive city-centre screen).

Bleakley is speaking to The Media Leader on the eve of his presentation to the World Out of Home Congress in Toronto (pictured, main image and below), in which he was invited to give a speech about how the medium will fare after the pandemic.

In some ways it’s an open goal – banging the drum for a medium that is in sharp recovery after being hit hard by audiences being forced to stay at home. “OOH is going to be straight-line growth trajectory. Not only is reach going to go up, but time spent with the medium will grow too,” he purrs. “There will be elements, you know, such as public transport won’t be the same or airports, for example, but the medium as a whole is recovering with increased audiences.”

The latest AA/Warc UK adspend forecasts bear this out, having estimated that OOH grew 29% to £901m last year, compared to a disastrous 2020 when the market all but collapsed, and is due to grow by another 32% this year. 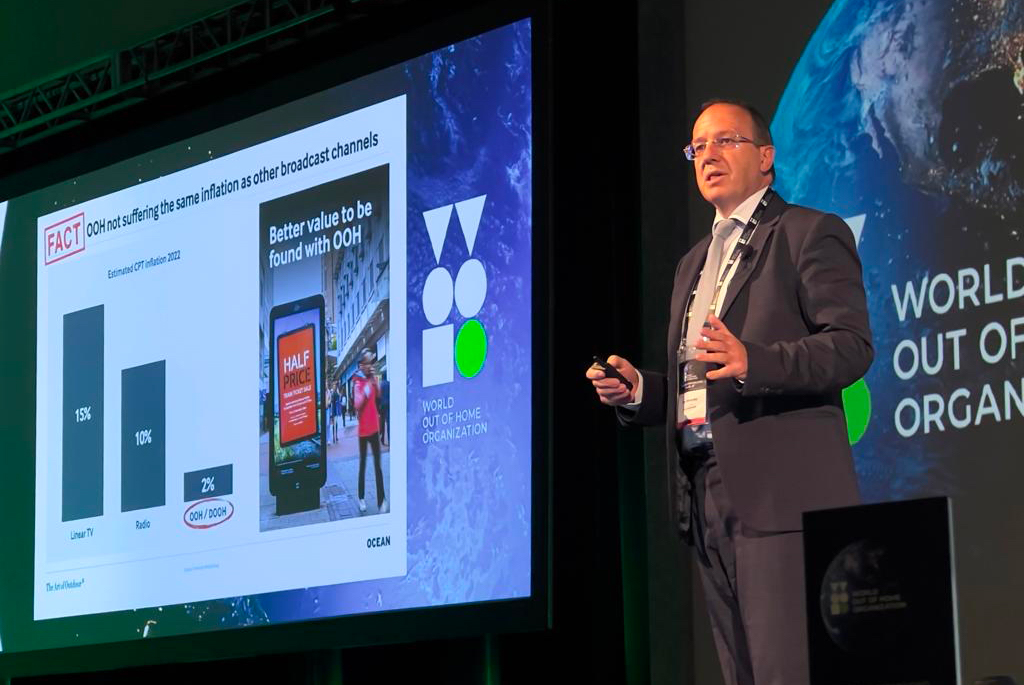 But, in other ways, Bleakley is offering the sector a chance for retrospection and to counter some of the more bullish claims made by the likes of Google about how changing media behaviours had been “accelerated”, as opposed to temporarily warped, by Covid-19.

In other words, he thinks the concept of the “new normal” is a mirage. The reason why Netflix, Zoom, Peloton, and other so-called “pandemic stocks” are now tumbling is not a market overreaction, but simply an inevitable regression to the mean.

“I suspect Netflix would have had a steady growth of increase in subscribers over the next five years, every year straight line graph showing subscriber growth –  for the city and for investors that’s what you want to be able to deliver as a business. But it turns out what they had was five years worth of growth in 12 months, because not only were people staying at home, they were spending more time with young people.”

It’s an intriguing theory: older people being forced to engage in media with children and younger relatives during a period of relative house arrest. Picture poor Dad squinting at his phone watching TikToks to see what all the fuss is about.

Meanwhile, Ocean and the industry’s other major UK outdoor players, JCDecaux, Clear Channel and Global, were being “punished”, by an unfair media narrative Bleakley says.

“When our audience was deteriorating at a rapid rate of knots, I’ve never seen so much media coverage by people in the industry by the BBC etc. obsess about the movement of people out of home and how low can it go, with there being fewer people on the streets and fewer people cars, all that. So when our medium was at rock bottom, all people did was talk about the audiences and people on the move. Now we’ve got three to five years where the audience is only going to go in one direction. Are we talking about the growth in those audiences with the same zest and vigour?”

Fair enough, but it was only last month that footfall at Westfield shopping centres in London was back up to pre-pandemic levels, as Bleakley subsequently mentions. UK retail footfall at the beginning of May, meanwhile, was less than 10% below 2019 levels according to analysts Springboard.

OOH beyond posters: ‘We are whatever we choose to be’

The pandemic also incentivised Ocean to experiment. The aforementioned Piccadilly Light activation, Bleakley reveals, was thought of by Ocean’s PR consultant Susann Jerry after a series of crisis meetings, brainstorms and strategy days in which execs discussed how they “turn the physical into the virtual”.

“We thought, ‘how on earth can we create an advertiser model where we charge for effectively other people’s earned media and amplification on social? It’s very difficult to do, but what you can do is reprice your medium, reposition your medium, talk about your audience not just delivering on the Route score but about impressions, because all those things are measurable. And then you can start to measure what the impacts of those things were.”

This means that the outdoor, Bleakley insists, should now be seen as a medium that broadcasts across different platforms.

“You’re actually getting an audience delivery that you didn’t even know you were getting before the pandemic. The medium is more valuable than we thought. The medium is no longer [just] a ‘poster’. If somebody posts about a Netflix ad on the IMAX [cinema in Waterloo, a major outdoor advertising site central London], and then the actors from Top Boy share that video, that goes all over the world… everyone has now realised this entertainment factor leads to greater levels of engagement and is really important.”

This sentiment was echoed by a recent GroupM and Kantar study, whose authors expressed surprise that digital OOH was seen to be ‘as entertaining’ as TV and radio.

“Imagine you’re [ITV CEO] Carolyn McCall,” Bleakley then posits with outstretched arms. “Imagine if she could say to the city: my audience is going to go up, people are going to spend more time watching television, and we produce programming that is going to be more entertaining, as well, so people will have a deeper and better relationship with brands that advertise. That’s gold dust. Only thing is, that is our medium right now, not television!”

Bleakley is speaking to The Media Leader soon after Ocean Outdoor’s largest shareholder, Atairos, bought the remaining shares of the company to take it private at a $580m valuation. He reflects on how far the company has come since “starting out 12 years ago with nine people and nine posters”. The companies are now going through the process of completion, which is expected to be finalised later this month.

“[The deal] is a great ad for the sector. [Atairos] started to buy shares in the business when things were pretty grim. Now they’ve made a premium offer when we’re at the beginning of the recovery. They didn’t just come in when things were good… we took a decision and thought ‘this business can do really well and we’re going to put our money where our mouth is’.

“One of the benefits of being a listed business was obviously being able to expand very rapidly in Northern Europe – more quickly than if we had raised debt and borrowed. We were acquiring business with cash in the bank and meant we could be more disciplined while moving fast. But, importantly, it meant when Covid hit we were not a leveraged business and we still had a very, very strong balance sheet. That’s one of the reasons we survived and why we will thrive now, because we’re not chasing our balance sheet down a hill.”