Is Mastodon really the answer to life after Twitter? 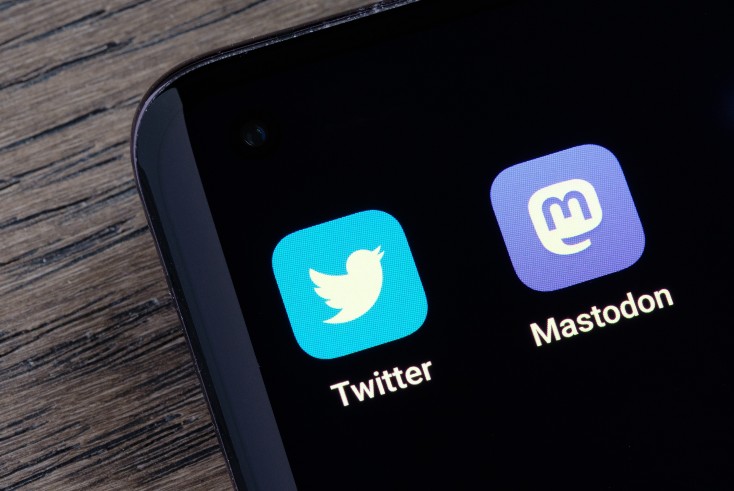 Many seeking an alternative to Twitter have moved to Mastodon, an interconnected platform of decentralized, self-hosted microblogging sites. What will be the knock-on effect for advertisers?

Just a few days into Elon Musk’s ownership of Twitter and many users have had enough.

Advertisers have similarly been reported to have grown weary, with several pausing their ad campaigns to see how Musk’s changes to Twitter—and his own controversial use of the platform—affect brand safety once the dust settles.

The fiasco at Twitter, though it has led to a spike in active users admiring the circus up close, has revealed one core dilemma: there is no a direct alternative to the microblogging platform.

While many far-right platforms like Truth Social, Parler, Gab, and Gettr sprung up to compete with the Twitter following its crackdown of hateful speech and disinformation (most notably leading to the ban of former US president Donald Trump), their popularity among far-right voices, including and especially those who have been already banned from more mainstream platforms, has limited their appeal to broader user bases and most major advertisers.

For more mainstream social media users, the name that has been thrown out most commonly to those seeking greener pastures has been Mastodon, an interconnected platform of decentralized, self-hosted microblogging sites.

If that already sounds less user-friendly than Twitter, that is likely because it is. Apart from the expected differences (tweets are called “toots”, the character limit is twice as long, and verification will remain free) unique to the platform is that when users register an account on Mastodon, they must pick a server to register on. This is because of Mastodon’s federated style, which emphasizes that each site is technically its own thing, independently run and moderated (the platform promotes servers it considers well-moderated).

Though you can access and interact with other servers, and follow users regardless of where they have registered, the experience is a clear step above Twitter in terms of technicality. While most users may want to register in commonly recommended servers like mastodon.social or mastodon.online, when I tried doing so myself, I was met with an error message. 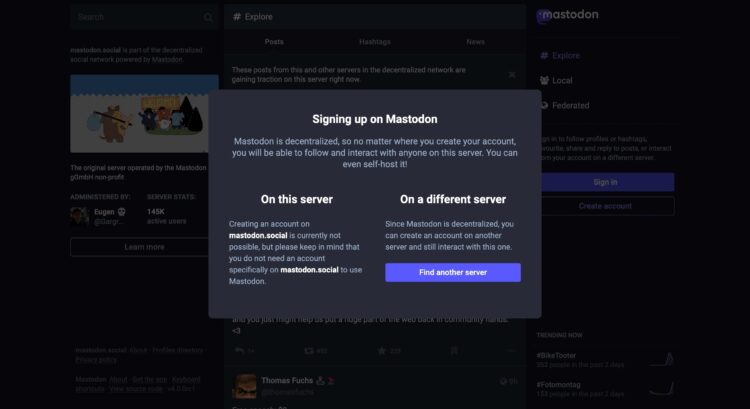 In part due to the influx of new users seeking refuge from Twitter, Mastodon’s servers have been overloaded. Founder Eugen Rochko described how difficult the sudden uptick in users has been as a developer in a post on Halloween.

“The past few days have extracted a heavy toll from me. While it’s nice to see your work finally taken seriously in the mainstream, the 12-14 hour workdays I’ve had to pull to handle everything is anything but…”

Rochko went on to describe that he currently earns just $36,000 a year for his work on the site, which he founded in 2016.

New users will have to grapple with the learning curve of a new and modestly more complex user experience. Akin to Reddit, users have to learn about and seek out server names for communities they find interesting. And while following major accounts is simple, those looking for big names and celebrities may find the list comparatively scant, at least for the moment.

So, I’ve opened a Mastodon account as a precaution against the possible Muskocalypse on this site: https://t.co/ybVhwQgsyC

Let me talk about motivation, which may be a bit different from other Twitterati 1/

“Right now Twitter users are hedging their bets,” influencer marketing advisor Scott Guthrie tells The Media Leader. “Yes, they’re setting up new accounts on social media platforms including Mastodon but they’re not yet deleting their Twitter accounts. Setting up a Mastodon account is one thing. Actively posting and engaging in content on the platform day after day, month after month, is a different proposition altogether.”

The taste testing of Twitter alternatives is not the first time online users have tried new platforms to see what sticks for them. In 2010, Digg’s unpopular redesign caused users to flock to platforms such as Reddit; in 2018, Tumblr’s ban on all adult content similarly led to diaspora (the platform only just announced it would re-allow nudity last week).

Guthrie notes that, though Mastodon’s decentralized nature is technically a move toward the utopian ideals of Web3, it currently lacks scale. Even with users nearly doubling to surpass one million in the past week, the platform still carries less than 0.5% of Twitter’s 238 million active users.

“It’s kind of like the anti-Twitter,” described Drew Benvie, founder and CEO of social media communications agency Battenhall. He accepts that Mastodon may turn off some with its “too technical, too clunky, too geeky” user experience and brand. And yet the platform reminds him of when social media was a new frontier for users and advertisers to explore with optimism.

Mastodon servers’ feeds populate sequentially, not algorithmically, which harkens back to early Facebook and Twitter models before the sites were awash with advertising and recommended posts. Such a “river of news”, as Benvie described, is appealing especially to journalists, and its decentralized nature leads to an experience where users are in greater control of the content they consume.

Despite such potential positives, however, Guthrie gave a word of caution: “A rush away from fears of a moderation-lite Twitter might not be a rush towards the effective moderation system many hope for. […] Mastodon has no unilateral power to force server owners to even comply with basic content moderation standards.”

That could provide some risk to digital advertisers who may be interested in exploring ways to promote content on Mastodon as its userbase swells.

Though Mastodon does not carry advertisements, depending on an individual server’s guidelines, there’s nothing to prevent users from posting promotional material, or brands interacting directly with potential consumers. According to Guthrie, this makes Mastodon “fertile ground” for influencer marketing, though the platform currently lacks influencer discovery tools to help advertisers identify and recruit key creative voices currently operating across the site’s various servers.

That need not stop advertisers from prospecting, though. As Benvie noted, “most advertisers realize that investing in a community can build a brand.” With its litany of niche, mainstream, and—at least for now—growing communities, Mastodon could be worth a toe dip, despite its extremely small current community of users.

Regardless of what happens at Twitter under Musk, “there will be a space for Mastodon alongside Twitter”, said Benvie.

But, he added, “Twitter is not going to disappear anytime soon. Some users are exploring elsewhere, but Twitter will continue to develop and diversify what it does.”