How tech will change OOH: a view from Canada 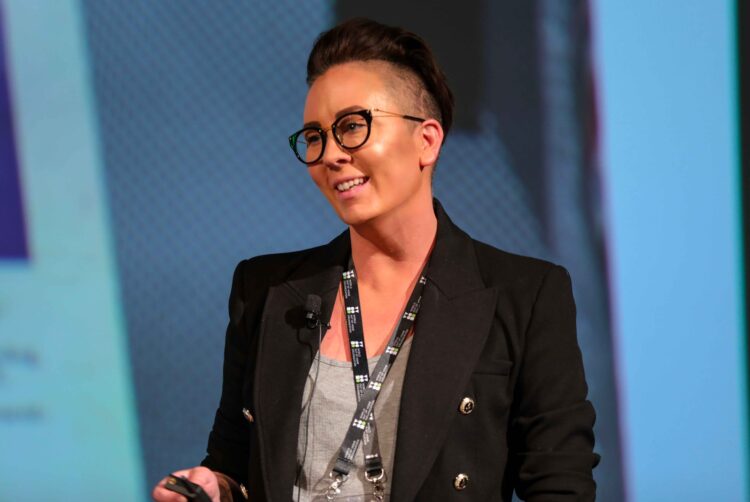 Canada is one of the world’s most advanced digital outdoor media markets and has undergone some of the world’s most stringent Covid lockdowns. The head of the country’s measurement body, Amanda Dorenberg, who has a unique history with the medium, discusses how tech will change outdoor advertising.

How many people working with the out-of-home media sector have also featured on the billboards or screens themselves?

The answer is surely a very small number. But Amanda Dorenberg is one of them.

Having found herself “on her own” since age 16, Dorenberg realised she would have to put herself through college to realise her dream of being a computer programming expert. She turned to fashion modelling as the most lucrative career available as a young woman at the time, and eventually landed her first big campaign: a “massive” billboard in Yonge-Dundas Square ­– Toronto’s equivalent of Times Square or the Piccadilly Lights.

“I was like, oh, that’s soooo cool. I just was infatuated by it,” Dorenberg reflects with a shake of the head, as if to shrug off the naivety of youth.

It certainly gives the president of COMMB, Canada’s marketing and measuring body of out-of-home media, an added layer of visceral appreciation for the medium – how it makes you feel as a viewer as opposed to purely how it is measured or traded. She was previously VP tech and media at Dynamic Media (now Outfront Media) and is the founder of FIND Creative.

“I’m enamoured by the media format,” she says. “And I love the disruptive nature that we’re in right now where we are taking technology data, data science techniques, and really amplifying this traditional media format into something that’s transcending outside of the typical definition of traditional media, because there’s so much data built into it now.”

A new Roadmap for outdoor planning and buying

Dorenberg is speaking to The Media Leader from a grey and rainy Toronto, where she was due to speak at the World Out of Home Congress about “how big data is empowering out-of-home” alongside Outfront Media Canada CEO Michele Erskine.

Her message to the world’s foremost collection of OOH specialists is to leverage the opportunities of data and emerging tech. For example, advertisers in Canada now have access to data from over 6.7 million road segments across the country, allowing media planners to understand directional volume and pedestrian movement (including the speed of those movements) to inform a campaign’s reach and frequency.

Dorenberg explains that the Canadian media-buying market is also moving away from daily average audiences for outdoor ads to “spot-level impressions”. This is not just thanks to advances in technology but also adhering to Canada’s state bylaws – ads in different regions must comply with different rules about the length of a digital ad e.g. whether they can be shown for six, eight, or 10 seconds. New methodology built on a web portal, launching this fall, will account for ad play impressions across these different spot display lengths.

COMMB is also building a production and planning tool called Roadmap, that will enable advertisers inventory management of about 100,000 assets across Canada. The company is additionally moving away from just offering traditional GRP [reach multiplied by frequency] calculations for impressions, but also measuring “spill”.

“This is to give a more holistic representation of total volume,” she explains. “In the Canadian market, a lot of the commuter roadside assets are on the way to cottage country. So those boards when we’re calculating a typical campaign are very low in market percentage – they’re drawing audiences just ripping down a highway from other major markets.”

Roadmap will report spill impressions that represent 1% or more of the market population, which Dorenberg says will enable advertisers and their media-buying agencies to be more strategic with their planning, as well as make use of more tactical placements.

Canada, Dorenberg explains, is an advanced digital out-of-home (DOOH) market, having had early adoption of programmatic buying tech for the last eight years. This allowed advertisers and media owners to “do all sorts of tests and really work out the kinks.” The country’s three major digital OOH players, HiveStack, Broadsign and Vistar, have cross-channel integrations set up with the likes of major demand-side platforms like Magnite (formerly Rubicon Project) and The Trade Desk.

Use of programmatic intensified during the pandemic, she said, because of the need to turn on and off ad campaigns at a moment’s notice during those early, unpredictable days of Covid-19.

“We were seeing quite a bit of non guaranteed buys,” she recalls. “[Advertisers] didn’t want to commit to a specific amount of budget or timing during the pandemic. It’s sort of a blessing in disguise because it really did exacerbate the adoption of programmatic digital home and the comfort of transacting that way, both on the buy side and themselves. Sellers became more comfortable with the fact that their internal sales teams can still be active in pitching direct deals, but they can also pitch and sell programmatically if that’s what the client wants to execute. It’s just another tool in their toolkit.”

COMMB leaned into this, Dorenberg explains, by becoming one of the world’s first joint industry currencies (JICs) to allow programmatic tech stacks to join as members alongside more traditional media owners. This is important as advertisers want to ensure common standards are being applied when using different digital technologies.

The purpose of that, Dorenberg reveals, was because COMMB was planning to release this new data set. “Our data granularity, whether it’s impressions on planned questions, or total circulation, is down to hourly components – we have 192 different hourly day parts that live in our back end…. So we could tell you the average circulation or impression for a typical Tuesday at 4pm, for example. So really getting super granular with respect to hourly data. And this provides a standardised impression multiplier for the programmatic tech stacks. Because they’ve joined us as members, they are required to leverage COMMB’s data, which in the Canadian marketplace will give an even playing field between the tech stacks who, you know, may be approaching things a little differently based on their dwell time and the multiplier calculations.”

That sounds promising, but are marketers really making the most of digital buying opportunities on out-of-home? It’s not very often, beyond the shortlists of various outdoor industry awards, that you see many brands use dynamic creative (ads which automatically select different versions of an ad when, for example, the weather or time of day changes).

“Marketers recognise what’s available but don’t often take advantage of it,” Dorenberg admits. “I would speculate that the costs of building out that creative could be prohibitive because you have to have so many different creative assets. When I worked at Outfront, we executed a good amount of dynamic creative. But it always came down to the fact that the marketers had to build out a regular brand creative so that if any of the triggers didn’t apply, they still had something playing when it came time for their ads come up… So, yes, I think it’s happening. But is it happening on a regular basis? I don’t think so.”

However, she is confident that outdoor advertisers will begin to carry out more “test and learn” approaches this year and next, due to the phasing out of internet cookies in online advertising. ”They’re gonna have to get creative, right? They’re going to have to come to out of home, which is a very safe environment, and do some testing to see what works for them. That’s going to include proximity testing with traditional media [and] it’s going to include interactive components that include programmatic.”

And yet, for all Dorenberg’s enthusiasm for the opportunities that emerging tech can bring to OOH as the medium recovers from pandemic lockdowns, it is still that younger her, the fashion model, that still drives much of her passion for the medium.

“I spent my early career on the backend of campaign creation; I was behind the scenes, I saw the images being created. And now, being on the flipside, where I’m more on the strategic and tactical side of things, I can see that the buyers and sellers are working together. It’s a different approach to campaign execution.”