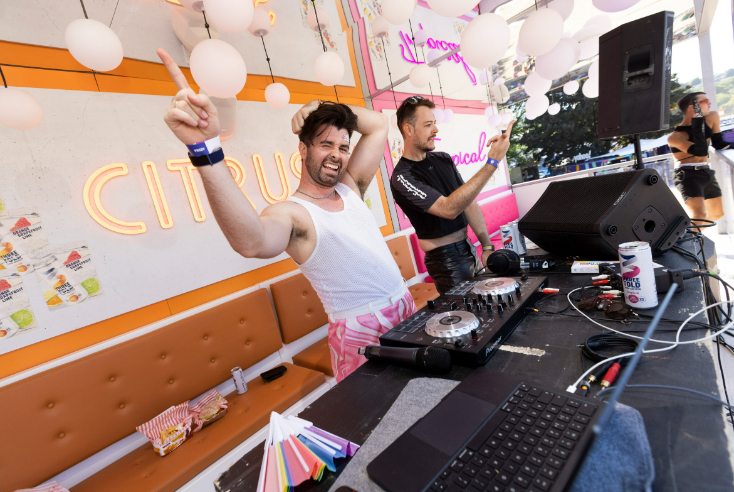 Bauer Media has a history of serving ‘specialist’ music identities. But Hits Pride Radio has exceeded expectations as an ‘always on’ brand that launched as a pop-up during Covid lockdowns.

Bauer launched Hits Radio Pride as a six-month pop-up in the pandemic as Pride events closed up and down the country in 2020, and is growing hours, reach and advertiser interest more than two years later.

The idea behind launching its first dedicated LGBTQ+ commercial radio station in the UK came from the realisation that there was representation across the LGBTQ+ spectrum across different Bauer stations, so it could easily create a station speaking to that community and its allies by using this in-house talent.

The station carries tailored content for LGBTQ+ community and its allies, from editorial series Tough Talks about coming out stories, and Faith, Sex and Me, to a “dialled up” musical slate including more artists from the community, and the station regularly broadcasts from Pride events of all sizes around the country, all year round.

Hits Radio Pride broadcasts digitally on browsers, phones and smart speaker. It is not currently part of Rajar measurement, but its modelled audience reach is 113,000 with 843,000 hours spent based on a mix of internal streaming data of the station mixed with DAB radio trends matched to the station’s broadcast areas.

This is a fraction of the wider Hits Radio Brand, which has a total number of 9.5 million listeners across the UK, according to the latest Rajar figures. However, the team at Bauer has been “astounded” at both the audience and commercial reaction since then, according to Steve Taylor, creative commercial director at Bauer Media.

“Normally when you launch a radio station, you get an initial amount of interest, and then when you’re looking at the IP listening figures, they tend to start to level off,” Taylor told The Media Leader. “There was something unusual with Hits Radio Pride, where for the first year every single month the reach and hours increased, so from that point, we thought we’re onto something here.”

The trajectory, despite monthly fluctuations, is still going up and up, Taylor added. According to the below data provided by Bauer, which tracks its first year of airtime (August 2020 to July 2021). The station’s reach grew in its first year by nearly four times (279%) and hours spent went up by nearly five-fold (383%).

Jason Brownlee, founder of insights platform Colourtext, explained that radio brands like Kiss and Kerrang! have proven that Bauer has a long tradition of serving what used to be called ‘specialist’ music identities.

He explained “Hits Radio Pride seems to extend this tradition into a new lifestyle and identity context. What will be interesting to see is how far Bauer manages to expand this franchise from the naturally limited LGBTQ+ population out to a wider Queer-friendly or culturally adjacent audience.”

The LGBTQ+ population is likely to be smaller than many people believe (an addressable audience of around 2.75 million people based on a UK population of 55 million adults aged 15+), but Brownlee added the target audience is “probably large enough” to support a niche audience radio format.

Hits Radio Pride’s growth in reach and hours has also been accompanied by “significant revenue increases”, according to Bauer, with many acting as “long-term” partners.

Taylor commented: “We try where possible to encourage any client that is booking advertising across the Hits Radio network to just automatically include Hits Radio Pride, and the majority of clients do because it also helps them from a D&I perspective as well.”

He added: “We’ve been really careful with who we’ve been working with because we wanted to work with commercial partners who almost had the right to be operating in that space, so no one could accuse a client of Pride-washing.”

Hits Radio Pride’s launch partner for its first six months was the Co-Operative Bank Partnership, with its staff recording idents for the station.

The radio ads were supported by information and support pages with local resources alongside geo-targeted display ads on Hits Radio Manchester and Hits Radio Pride websites, as well as geo-targeted social media posts.

Disney+ advertised on Hits Radio Pride during two weeks over Pride Month to promote its new “Pride Collection” showcasing core LGBTQIA+ titles like Love, Victor, It’s A Sin, and Out.

Hard seltzer brand Three Fold launched coordinated a six-month campaign on the station which also promoted its involvement in endurance course Tough Mudder, in which 100 employees ran for the Brighton Rainbow Fund. The West End musical &Juliet also advertised on Hits Radio Pride with cast members being interviewed live on air talking openly about their sexuality.

There is also a range of sponsored content which seeks to have conversations about LGBT+ experiences and sexuality, such as the Hits Radio Pride’s Poll which asks listeners to vote on the best UK pride events, Can’t Think Straight, an investigatory docuseries exploring different issues in the community, including conversion therapy, or Pride’s Priority Play which works with record labels each week to champion LGBTQ+ artists.

Rhys Davis, BT’s media lead, said the telcoms giant has just renewed it partnership with Hits Pride: “This partnership has allowed us to truly stand together with the LGBTQ+ community and celebrate the richness we believe lies in the heart of diversity.”

Taylor noted when taking in to account the IP streaming numbers, there has historically been a peak during Pride Month in the last two years, but stressed the point that people are “not just gay during Pride Month”.

He explained: “Sexuality continues all year round, and also people in the community have money to spend all year round, as well, so that’s a reason why we’ve been really pleased that Hits Radio Pride has continued as a permanent, always-on station.”

The Hits Radio Pride initiative ties in with Bauer’s D&I strategy which is built around five pillars, one of which is LGBTQ+, the others being gender equality, race, religion, social mobility and enable, which focusses on inclusion of disability.

Bauer Media also represents a number of partner stations including Gaydio, so any client wishing to target the LGBTQ+ audience can purchase advertising on Hits Radio Pride, Gaydio, or both.