Directories and the older consumer 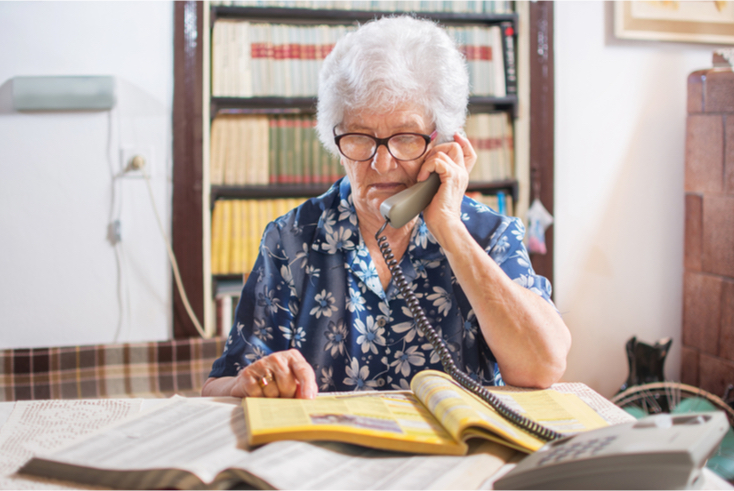 I was working in my study last week when I heard a particularly heavy ‘thud’ on my doormat. It was surprising as the delivery of packages is usually accompanied with the ring of the doorbell, and a cheery smile from the relevant courier as they take a photo to prove I received it.

Imagine my surprise when I went to have a look and found the BT Phone Book lying in the hall. It struck a chord on so many levels.

The BT Phone Book has shrunk in size

Firstly, because it was so much smaller and thinner than I remember. I am speaking about a memory of it from a very long time ago, because I don’t recall even seeing it for some time. I didn’t think directories like The Phone Book, Thomson’s local directory and The Yellow Pages existed in paper form anymore.

So, either other members of my household simply treated it as junk and binned it before I got home in the olden days of commuting, or it is making a comeback now so many of us are stuck at home.

An endangered species for decades

Secondly, I was the head of strategic communications at BT over 15 years ago, when there was a whole division concerned with the management and distribution of the Phone Book.

It was also the time of the great battle of the directory enquiries brands. OFCOM had opened up competition, disrupting BT’s monopoly on the number 192, by issuing a new suite of numbers all prefixed by 118.

New kids on the block with considerable marketing budgets like 118118 battled it out with BT’s 118500, fuelled by the charges made for using the service.

This was when Google search had also arrived. A completely new disruptive force offering a mesmerising and free way of getting contact information.

Broadband penetration hit five million customers whilst I was there, mobile phones were growing at a phenomenal rate, and people aspired to own a Blackberry device long before we knew about what was just around the corner with smart phones.

Consumers have got used to free information

But even then, we could see that the days of a physical phone book funded by advertising listings, and consumers being willing to pay up to £3 a minute to call someone to give you a fixed line phone number, were… well, numbered.

The view at the time was to treat the BT Phone book and Directory Enquiry products as ‘cash cows’ using the profits to fund the development of new ventures in entertainment, which we can now recognise like BT Sport.

I am pretty sure we thought the Phone Book would no longer exist by 2015, never mind it landing on my doormat in 2021.

Its ads reveal its ongoing role

So, with some curiosity I opened it up to examine its contents, looking for clues as to its current role in people’s lives and potential target audience.

The first thing I noticed was the inside front cover, an Evershed Brothers ad for funeral services offering a £100 discount if I quoted BT100 and showing a very young woman, possibly in her 20’s, laying flowers on a gravestone.

I am often asked for my views on the lack of representation of 50+ people in advertising and immediately clocked this as a great example of absurdly youthful casting.

How many people under the age of 30 have to organise a funeral, let alone would look for a provider in the BT Phone Book?

An opportunity for smaller players to stand out

Next I turned to the outside back cover, presumably still regarded as the premium positioning, with the highest quality paper stock and 50% chance of the side people would see when they went to the door mat.

It was a good simple general ad for Be Wiser insurance. And, in fact the start of a theme, as there were a good number of insurance brands in the classified ads section. Age UK, Swinton, Be Wiser, Spitfire, Onesure to name a few, but none of the bigger brands like Aviva, Direct Line, LV or Churchill.

This is clearly a space where smaller brands feel they can dominate, having been abandoned by their larger competitors.

The first 50 pages, 25% of the directory, is devoted to classified ads. Emergency numbers and local businesses ranging from accountants to zoological gardens.

Scattered over those 50 pages, in varying sizes ranging from DPS to 5cm x 5cm, were no less than a dozen ads for Acorn stairlifts. Once again, with models sitting in the stairlift who looked as if they were in their fifties, slim and entirely able-bodied.

It confirmed my suspicion that directories are probably mainly used by older people who like to look things up in paper format rather than go to Google. With all the reassurance that brands which can afford to advertise are likely to be ones you can trust to stay around.

Stairlifts are a rapidly growing market

Stairlifts are not a new concept in the UK. It is believed that King Henry VIII was first to make use of assisted transport to navigate stairs. The story goes that one of his subjects developed a system of block and tackle pulleys mounted on a track that enabled the cumbersome King to climb the stairs of London’s Whitehall Palace.

In fact the demand for stairlifts has grown tenfold over the last 20 years. As people increasingly live longer and lead fuller lives, many will opt to stay in their homes, and for some, physical restrictions will make UK stairlifts a vital requirement rather than a luxury. Enabling them to carry on living at home rather than going to a care facility or moving into ground floor accommodation.

Ageism is alive and well

But why are brands afraid to show their actual customers in their advertising? It seems very unlikely to me that anyone would invest in a stairlift several decades before they actually needed one? There are three million UK residents over the age of 80, and this projection is set to near six million by 2030 and reach eight million by 2050.

We talk a great deal at the moment of the importance of representation and advertising reflecting the world we live in. If we have finally reached the stage when periods can be shown to be red and not blue, surely we can show an 80+ person, rather than a 50+ person, in ads directed at them?

It is not just greying hair that signifies an ageing body, and it is quite irritating to see it used as the only signifier. We shouldn’t be afraid to show the reality of getting older and to stop airbrushing our elders out of our ads. Particularly when they are so clearly the target audience.

Brand should be more authentic

We all understand that when advertising nappies, babies feature, and they are likely to be cast for their cuteness and appeal to parents. Appropriately casting age appropriate models for the product.

It is striking that in the advertising of both funeral services and stairlifts, both such brands featured in the BT Phonebook have chosen to feature people who are several decades younger than their consumer.

I doubt this is driven by any insight from their customers, but rather the ageist bias of the people creating their campaigns. There is clearly plenty of life in both the paper form directory market and its audience yet.

Jan Gooding is one of the UK’s best-known brand marketers, having worked with the likes of Aviva, BT, British Gas, Diageo, and Unilever. She is an executive coach, the chair of PAMCo, Given (London), the president of the Market Research Society, and the former chair of Stonewall. She writes for Mediatel News each month.