‘Code red for humanity’ is our final call 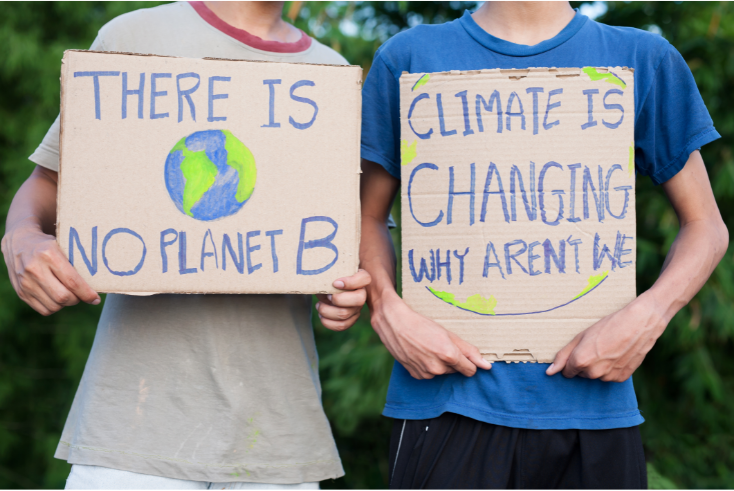 Having lived through a period of accelerated change, Jan Gooding believes we are in a unique position to challenge our assumptions around climate change and join the dots for brands

One of the joys of the summer is the opportunity to read a book. Advice on what to take away is cherished. Our busy minds seek entertainment, inspiration, or education even when we are on holiday.

Some people just want some light escapism, others are drawn to biographies or business books they want to read in a concentrated fashion. Books that may have been collecting during the year that now sit in a tall pile and beckon invitingly to be plundered.

The people who make us think

A few weeks ago, I noticed on Twitter that John Amaechi had published his latest book ‘The Promises of Giants.’ I noticed that he was the narrator on the Audible version and immediately downloaded it.

I have met John several times and he is indeed a giant amongst us. A psychologist,  consultant and former NBA basketball player who has a voice you want to listen to. Not because it’s comforting, but because he makes you think again.

Like Margaret Heffernan, author of ‘Wilful Blindness’, he has a way of explaining why change is so difficult. Both authors not only giving us new understanding about why there is resistance to change but firmly challenging us to do better.

The legitimacy of brand activism

John is the man who first joined the dots for me regarding the potential of brands to be activists.

Years ago, I was convening a panel in Manchester at the Stonewall Workplace Conference. He was one of the celebrity contributors. A role model as a gay, black man from Stockport in Cheshire who had defied the odds by playing basketball in the NBA in USA.

Not only that, but he also subsequently pursued a distinguished career as a psychologist, founding the APS Intelligence leadership consultancy.

He describes himself as a ‘giant’ because he happens to be 6 foot 10 inches tall, which has ramifications in how people respond to his physical presence. But that day in Manchester I discovered that he is also a giant as a leader and coach.

There was a discussion on the panel about the fact that it was still very difficult for LGBT+ athletes to be ‘out’ while they played as professionals. As he spoke, he turned and looked at me with his steady gaze. ‘I have to wonder’, he said, ‘why brand sponsors don’t do more to challenge the sporting bodies and clubs they are associated with to do better on this?’

Bringing my identity to my work

It was gently put, but I certainly heard the rebuke. I was there convening the discussion as chair of Stonewall. He had noted that I was also the group brand director of Aviva, which was the brand sponsor of Norwich City Football Club, Premiership Rugby, and the Aviva Stadium in Dublin.

Stonewall had partnered Paddy Power, the betting firm, two years previously and launched a campaign called ‘Rainbow Laces.’ It had been initially targeted at the men’s football league. Precisely because there were no gay players who felt comfortable to be out at their ‘workplace’, the football pitch.

The campaign encouraged fans, players, and pundits to show their solidarity as allies by wearing rainbow laces to ‘make sport everyone’s game’. But it was yet to gain real momentum.

After two years, Paddy Power gifted the campaign IP to Stonewall. It in turn persuaded Arsenal and Adidas to help establish ‘Team Pride’ by attracting a powerful coalition of brands.

Stonewall duly hosted a conference to galvanise support. Spurred on by John’s challenge, I ensured the relevant Aviva UK marketing teams attended and to my great joy, we became early members of the emerging consortium of brands. I had discovered the power of brand activism.

Embedded assumptions get in the way

Over the past few weeks, I have been walking my dog Maggi each morning in the company of John once again. His distinctive voice in my earphones posing pertinent questions to those of us who aspire to lead.

I found myself smiling inwardly as he pronounced unconscious bias training ‘absolute bunkum that has become a harmful distraction in the workplace’. Its use akin to a doctor fitting the Nike Air Jordan 1 trainer to a person with a broken foot. It is simply not fit for purpose.

John encourages us to reject the myth of ‘unconscious’ bias, which excuses people from responsibility for their behaviour. Replacing it instead with the more useful concept of ‘embedded assumptions.

The key point is that assumptions may be deeply held but they are open to challenge. Our ‘first thought’ doesn’t have to be translated into behaviour. If we choose to, we are perfectly capable of consciously filtering so we correct our speech and actions.

We must question everything.

I think this idea of surfacing embedded assumptions is a useful way to get to the root cause of our current behaviour.

As I listened to the UN Report on Climate being described as a ‘code red for humanity’ I wondered why brands aren’t doing more. Do those who work on brand strategy assume they are empowered to join the dots between their everyday jobs and the climate emergency? Or do they believe that there is a conflict of interest between what they think privately and what they are required to do at work?

It is my belief that right now, we are each uniquely qualified to help join the dots for the brands we work on.

We have the skills required and the right to use our voices because our lives depend on it. What’s more, we have just lived through accelerated change so we know it can be done.

Few people believed that the entire UK population would comply with all the regulations that created national lockdowns. But the truth is that once people understood the reality of the health emergency, they readily gave up their freedom, worked from home, bought online, and co-operated on a scale that even the behavioural scientists had not expected.

We are not helpless; we have choices to make

The list of assumptions that underpin the status quo and must be challenged is endless.

For example, can we continue to assume that people are not prepared to repair and re-use rather than buy something new? Is it true that consumers are unwilling to pay more for sustainable production? Do we still believe that people only care about how cheap energy is and not where it comes from? Are we right to resist making changes that increase our costs? Are we willing to stop producing goods that are harmful to the planet and do something completely different?

As we look to change our business strategies, we should make a list of the embedded assumptions that no longer serve us.

In the face of our ‘Code Red’ warning I think we will find that many of them are no longer true. Consumers and governments expect us to be conscious of the detrimental impact of our behaviour and change it. Every brand needs to become a climate activist now. People won’t forgive us if we don’t.