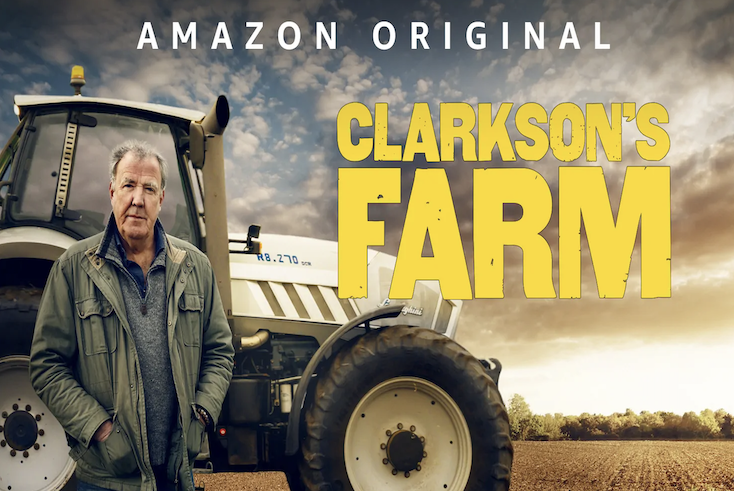 Stephen Arnell plots the drawn-out demise of Jeremy Clarkson following ‘that column’ at the end of last year.

When being cancelled takes over a year…

Amazon’s apparent desire to dispense with the services of Jeremy Clarkson a month after his now notorious Sun article attacking the Duke and Duchess of Sussex has struck many observers as a tad cynical.

Surely the best time to administer the order of the boot would have been at the time of publication, or Clarkson’s first non-apology on Twitter. 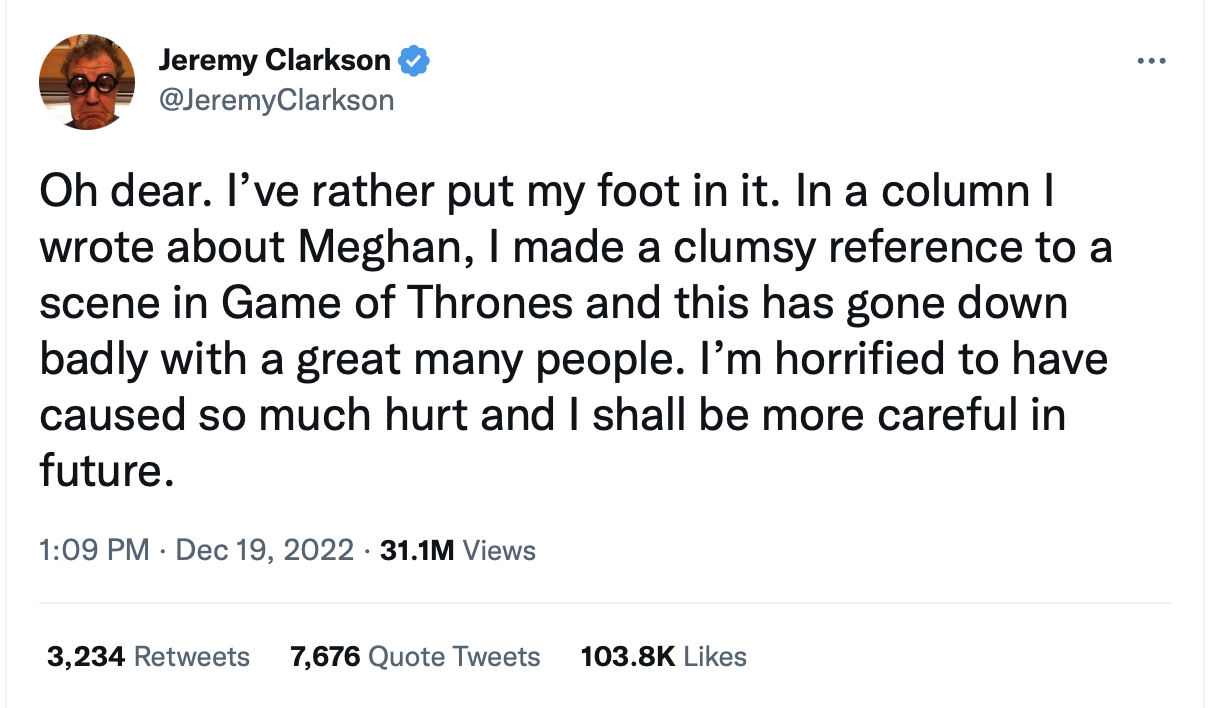 Then, with news of his insincere-sounding Christmas Day abasement, addressed solely to Harry (not Meghan), it sounded like Clarkson was becoming aware that his highly paid Amazon gig may be in peril and that his employer was (in his own words) “incandescent” over the affair.

A public Instagram apology was issued on Monday 16th January, likely mirroring his private email to the pair:

I really am sorry. All the way from the balls of my feet to the follicles on my head. This is me putting my hands up. It’s a mea culpa with bells on. Usually, I read what I’ve written to someone else before filing, but I was home alone on that fateful day, and in a hurry, so when I’d finished, I just pressed send. And then, when the column appeared the next day, the land mine exploded. It was a slow rumble to start with and I ignored it. But then the rumble got louder. So, I picked up a copy of The Sun to see what all the fuss was about. I couldn’t believe what I was reading. Had I really said that? It was horrible.”

The response from the Sussexes was more succinct, including this statement:

Unless each of his other pieces were also written ‘in a hurry,’ as he states, it is clear that this is not an isolated incident shared in haste, but rather a series of articles shared in hate.”

Their non-acceptance of Clarkson’s grovelling predictably enraged the right-wing commentariat.

But why the delay in his ‘full’ apology?

Some might say Amazon wanted as much in the can of the next seasons of Clarkson’s Farm and The Grand Tour before any more shit hit the fan, which could have resulted in his immediate dismissal.

It also may have wanted to see if the furore would die down before making a decision, and that he might rein himself in for the duration, which obviously his latest stunt banjaxed.

Or, alternatively, Amazon was getting the footage in before Clarkson deciding the game’s not worth the candle and upping sticks himself in a huff, letting his lawyers sort out the consequences.

Presumably, Amazon was fully aware of the presenter’s difficult reputation and habit of slagging off his bosses when in 2015 he called Top Gear producer Oisin Tymon a “lazy Irish c**t” ,and punched him in the face after Clarkson wasn’t immediately served hot food during the filming of Top Gear for BBC1.

An already simmering feud between Clarkson and then BBC Director of Channels Danny Cohen erupted, resulting in the presenter being given his marching orders.

A clash of personalities was deemed an enjoyable spectator sport to some in the TV industry – or as a no-win battle between two of the least likeable figures in UK television at the time.

Whatever happens though, Clarkson will undoubtedly be alright, as will his compadre James May (notwithstanding his recent tendency to drive into brick walls), and very probably Richard ‘The Hamster’ Hammond, despite his status as the Gummo Marx of the zany trio.

It looks like Clarkson still has his gig as host of Who Wants to Be a Millionaire so non-fans will still have the unpleasant prospect of his appearance on our screens for some time to come.

Still, that’s what the off button/remote is for, I guess.

His retention at the broadcaster is no great surprise.

Despite ITV director of television Kevin Lygo calling Clarkson’s attack on Markle “awful”, he has long been regarded as an executive with scant seeming attachment to general standards of common decency per se, as a cursory trawl through his past comments on a variety of subjects attest.

Some have suggested that Clarkson could shop The Grand Tour and spin-offs to Netflix UK, which is experiencing considerable problems breaking new shows.

But it’s extremely unlikely that UK boss Anne Mensah would swallow her ‘Social Justice Warrior’ pride and go for it, certainly taking into account the financial cost and reputational damage of the Clarkson brand.

If Clarkson does eventually lose all his TV work, spare a thought for his benighted neighbours in the Oxfordshire village of Chadlington, who continue to suffer his tiresome money-grabbing antics as would-be empire-building owner of Diddly Squat Farm. 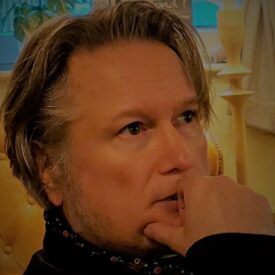