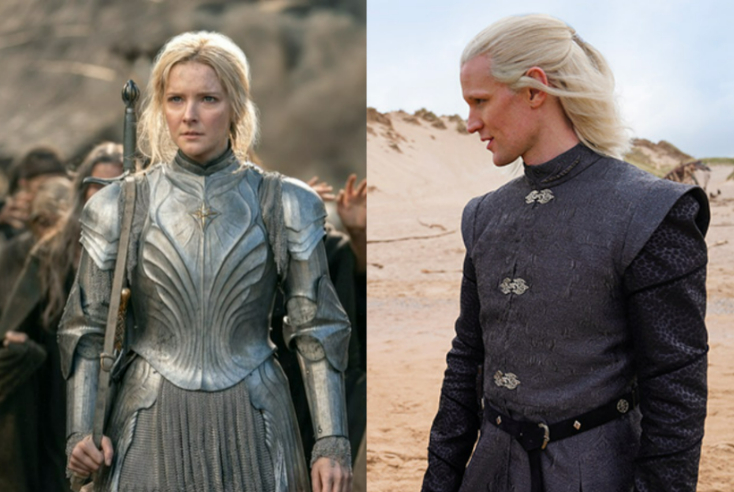 Stephen Arnell explains why, despite being disappointed by the new series, he will still be watching the next episodes of House of the Dragon and The Rings of Power.

Recent weeks have seen the release of two budget-busting fantasy prequels — Amazon’s The Rings of Power (LotR) and HBO/Sky Atlantic’s House of the Dragon (GoT).

Both shows have received extensive media coverage, despite their pay-only availability; some have argued that this limits their cultural impact as they won’t appear on free network TV.

This I doubt — anyway, the point is moot, as no UK network could afford either show.

And when they’ve tried anything similar, they’ve come a cropper, witness Troy: Fall of a City (BBC1, 2018) and Beowulf: Return to the Shieldlands (ITV, 2016).

Typically for the BBC, when they actually put money into a successful epic (Rome) they got cold feet, relegating the show to BBC Two and then pulling out, preferring to sink licence fee payers’ cash into the likes of Don’t Scare the Hare, Phoo Action, The Royal Bodyguard, The Wright Way and I Love My Country.

Auntie pulled the same stunt more recently when they bailed on the rather enjoyable The Last Kingdom — fortunately, Netflix stepped in for the following four seasons.

Turning to the two new shows…

Dragon on (and on)

HBO and Sky are reportedly happy with the progress of House of the Dragon — prior to the show’s debut, Sky content boss Zai Bennett said: “If only half the (GoT) audience come back for HotD it’s a massive success.”

Ratings are strong and Warner Bros Discovery have already commissioned a second series, but as for the show itself, opinions are mixed.

As a GoT fan and reader of all George R. R. Martin’s novels set in the Westoros legendarium, I’m distinctly disappointed.

The acting is generally flat, particularly amongst the younger cast members, dialogue leaden, and effects sub-par for what I was expecting.

No character has the energy, zest, or wit of Tyrion and Jamie Lannister, and Matt (Morbius) Smith’s constipated turn as semi-bad guy Daemon can’t hold a candle to the legion of nasties in Thrones.

Still, I’ll continue watching in the vain hope that House of the Dragon will eventually pick up; a desire that I’m not alone in.

‘We stay true to each other, with our hearts even bigger than our feet.’

And so, too The Rings of Power with Largo Brandyfoot (Dylan Smith) quoted above from episode one.

Again, as with GoT, I’m something of a fan — I even read most of Tolkien’s ennui-inducing The Silmarillion, but the show is (in my opinion) dreck.

Amazon must be pleased with the 25 million global audience for the first two episodes of the show, but as the first and second episodes of House of the Dragon drew a 10.1m average in the US alone, perhaps it is not that spectacular.

Reviews have been almost overwhelmingly positive (which is strange in itself), but viewers’ ratings on Rotten Tomatoes and on Amazon’s own reviews tell a different story.

Now this could be organised groups of Tolkien purists, but it doesn’t detract from the view that (again in my opinion) The Rings of Power is a crock.

Why? The fortune cookie dialogue, mediocre acting, and the dull plotting don’t help — and this is one show that could have benefited from having a few charismatic stars in the mix, preferably not buried in prosthetics.

Episode one and two dropped (do we still say that?) last Friday; a bizarre mash-up of GI JOE (Elf Commander!), The Darling Buds of May (the blackberrying transient Harfoots), All Creatures Great & Small (animal husbandry sequences) and The Phantom Menace (endless elven bureaucratic yammering).

But it was nice to see Elrond (pointedly barred from the Elf Lords Council due to his Spock-like half-human heritage) give a shout out to the old Frankie Goes to Hollywood semi-hit “Warriors of the Wasteland”.

For me, a particular let-down was the lack of a big Morgoth reveal (unlike the beginning of Fellowship with Sauron); Morgoth of course being the towering 100ft original baddie who employed the eventual Dark Lord as his sidekick/general factotum.

Script-wise, as Harrison Ford once said to George Lucas: “You can type this shit, but you sure can’t say it! Move your mouth when you’re typing!”

In the case of The Rings of Power, the Xanaxed platitudes spouted by the out-to-lunch Elves resemble Wes Studi’s predictable CoD-inspirational utterances as The Sphinx in 1999’s Mystery Men.

And I’m afraid the twee Irishisms of the proto-Hobbit Harfoots leave me cold, as they (presumably unintentionally) veer dangerously close to leprechaun territory.

The show attempts an element of mystery with the identity of Sauron; is the shape-shifting Maiar Catweazle lookalike The Stranger — or shifty human “Pegleg-Pete” Halbrand?

I won’t be losing any sleep over it.

But, as with HotD, I’ll be checking out the next episode.

Amazon’s shareholders will be hoping that the $1bn show is a hit — or else be wishing that Jeff Bezos’ favourite book had been something more modest in scale.

Perhaps Nicholson Baker’s The Mezzanine (1988) or Trophy by Michael Griffith (2011)?