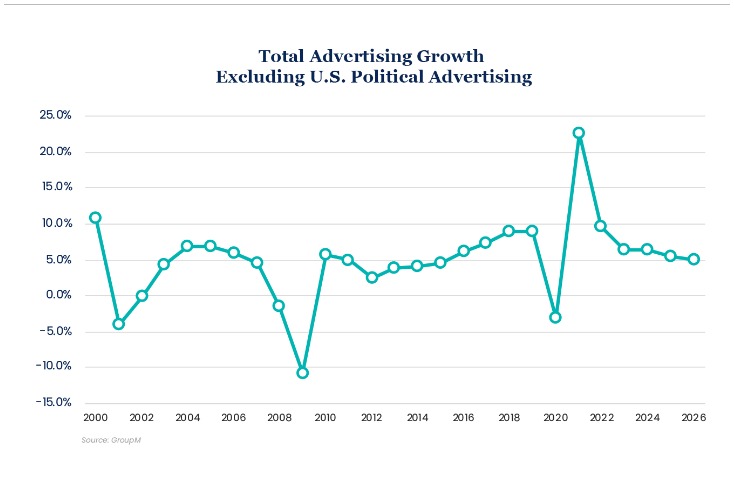 Global adspend and revenue are growing faster than previously thought, according to forecasts by three of the world’s biggest media-buying networks.

Brian Wieser, global president for business intelligence at GroupM, said: “The pace which the growth is occurring is so surprising at so many levels.

“Every time we published a forecast this year, I worried that we were too aggressive but it turns out we were conservative.”

Wieser described the UK’s ad revenue growth as “the most surprising” given its marked economic hardship over the pandemic.

GroupM analysis found the UK had the highest ad revenue growth total among major markets at 35.7% for 2021, well above September forecast of 30%.

In Magna’s global ad forecast, it stated that total adspend in the UK in 2021 was “propelled” to an unprecedented level of +30% by economic recovery and organic adoption acceleration.

It also said the UK market would reach £35.8bn and remain largest market in Europe, and fourth largest in the world as a result of continued GDP growth.

Growth is ‘heavily concentrated in digital’

GroupM maintained global digital advertising was set to grow by 30.5% by the end of 2021 and account for $491bn or $537bn depending on the “narrowness” of the definition, including or excluding revenues from digital extensions of traditional media.

This was echoed by Zenith and Magna IPG in their forecasts.

Zenith said advertising across all digital channels will exceed 60% of global adspend for the first time in 2022, which would break down into 61.5% of total expenditure.

The Publicis Groupe agency also predicted social media to be the fastest-growing channel between 2021 and 2024 with average annual growth of 14.8% and online video at 14%.

“As consumers rely ever more on digital technology to connect and entertain them, and to inspire and fulfil their purchases, advertising is playing a greater role in driving sales and brand growth,” said Jonathan Barnard, head of forecasting at Zenith. “Over the next three years we expect the ad market to achieve its highest rate of sustained growth since 2000.”

Inflation and pandemic cause less ‘friction’ than expected

All three reports pointed to the growing popularity of streaming, connected TV and online video as major areas of growth, albeit when considering cost-per-thousand (CPM) inflation and declining linear audiences.

Current global levels of inflation were predicted to get to nearly 4% during 2021 and 2022, but, in a summary of the annual report findings, Group M stated: “Underlying economic conditions [are] generally positive for advertising at present time despite inflationary conditions and pandemic.”

Wieser also mentioned that what was expected was if you have a bad economy, then the advertising industry should mirror this but this has not been borne out in the data as customers have been willing to pay extra costs passed on to them.

He added: “We expected moderation but there have been reasonably elevated rates of growth.”