Why TV appears to be an ‘attention bargain’ 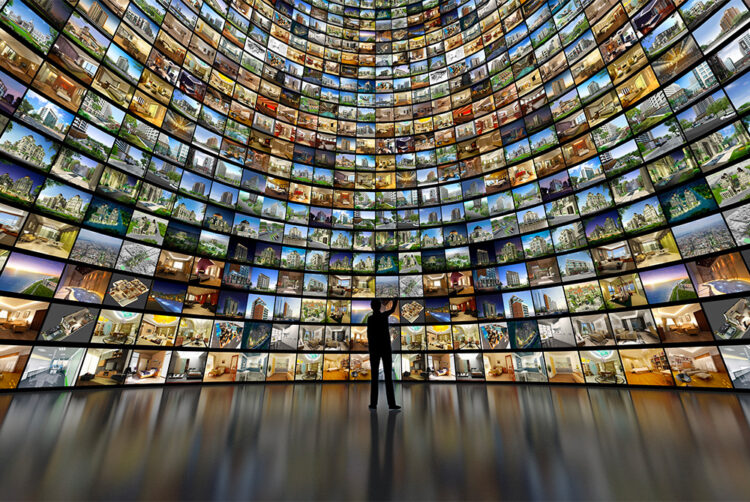 For the first time, we now have a common currency of attention across — and within — all the major media that allows for true like-for-like comparison.

How much is a TV ad actually worth? Calculating this keeps the brightest minds in our industry up at night. Part of the problem is down to understanding what you’re getting when you pay your money: how many people are exposed to  the ad and how many are actually looking or listening when that happens.

But part of it is down to not knowing what the other stuff is worth. Value, at least in advertising, is relative. To know the value of one media, it’s important to know the value of the other alternatives. After all, it is a given that we have to get the brand’s message out there. The question is how efficiently this is done: how may ads would I have to buy in Media A to achieve the same result of a single ad in Media B?

Lumen’s attention data provides advertisers with a ‘common currency’ to judge the value of inventory across a wide range of digital platforms and providers. But there has always been a missing piece in our data: TV.  While we could tell you how many MPUs add up to a Skin, or how many Stories add up to a Reel, we had no answer to the question that everyone asked us: how many digital ads add up to a TV ad?

That deficiency has now been rectified. Since September of this year, we have partnered with TVision to create the UK’s first TV attention panel, to complement our existing desktop and mobile panels. We now collect data on over 750 people, in 450 households, up and down the UK.

TVision recruits panellists to install a webcam on top of their main TV set. This records how many people are in the room, if their heads are turned towards the TV screen or not, and even whether they are awake or asleep. A set-top box records what channel, programme and ad is being played. The webcam data and the set top box data are combined to create exactly the sort of attention data produced by the Lumen panels — but for TV.

The initial results from this panel are astonishing as the underlying technology. Because, for the first time, we can compare like with like, and understand quite how much attention goes to advertising across media.

Yan Liu, CEO of TVision, and Josh Barnett, Lumen’s head of sales for EMEA, spoke about this topic at Mediatel’s Future of TV Advertising Global event this week. But here’s a sneak peek of some of the like-for-like data they will share:

TV has a ‘viewability problem’ – just like every other media

The big like-for-like comparison is viewability: what happens when we apply the same technical standard of viewability across all media. And this provides our first big insight. Not all TV ads that play out are ‘technically’ viewable to MRC standards (100% of the pixels exposed for two seconds or more). This isn’t because the ads don’t reach the screen, or play out for less than two seconds. Instead it’s because there’s not always someone in the room to watch the ads — or if there is, that person isn’t always awake. It appears that roughly 20% of TV ads play out to empty rooms or snoozing viewers. 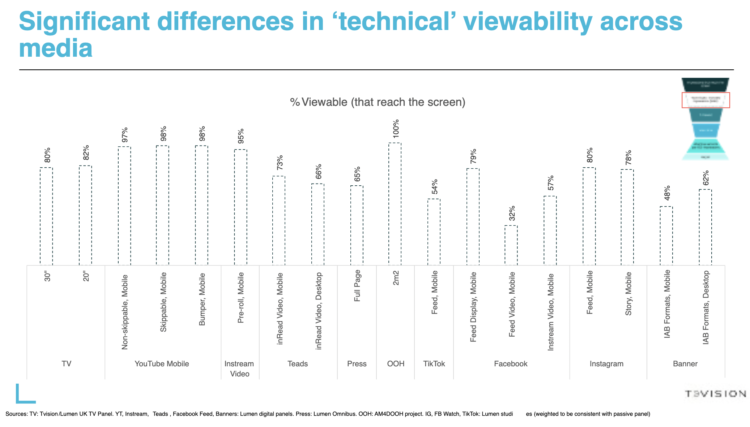 In some part, this ‘viewability’ is taking into consideration by BARB: participants on that panel are incentivised to ‘click in’ and ‘click out’ as they enter and leave the room. But that won’t account for participants who are both in the room but also in the Land of Nod simultaneously.

And what’s really interesting is comparing this data to the viewability rates of ads that reach the screen (i.e. absenting fraud and ads that never make it to the view port of the device). While not all TV ads are viewable, it fares much better than many other media.

TV ads are not always viewed

Things get even more interesting when we look at the percentage of ads that get noticed at all. Just because an ad is viewable does not always mean that it will get viewed. Here the UK data shows that around 43% of TV ads get some visual attention — meaning that 57% of your TV ads get ignored. 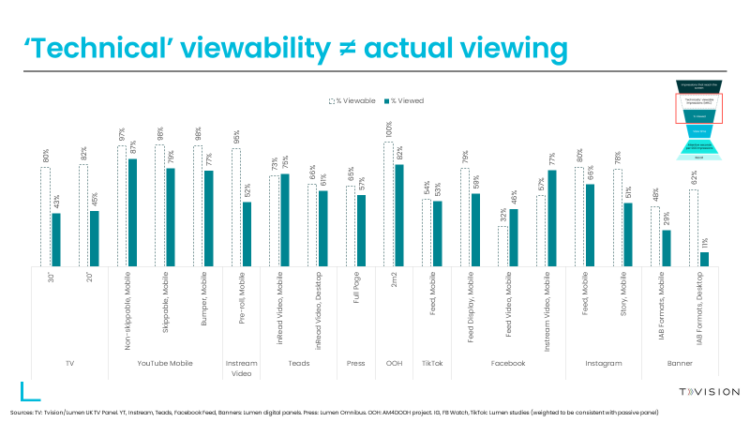 But here’s where the cross media comparison is interesting, because there’s an interesting anomaly here. For most media, there’s a decline between what people look at and what is ‘technically’ viewable. But for some — such as some social media platforms — there’s actually more viewing than viewability. This is because if ads on these platforms reach the viewport of the device, they can gets some attention, even if they are not on screen for the requisite two seconds to achieve ‘technical’ viewability.

Getting noticed is only half the story: the time people spend looking at ads is critical for driving memory and shifts in brand perception. And here, TV shows it’s true power relative to other media. On average, a 30-second UK TV ad will receive 11.8 seconds of actual attention – dramatically more than other media. 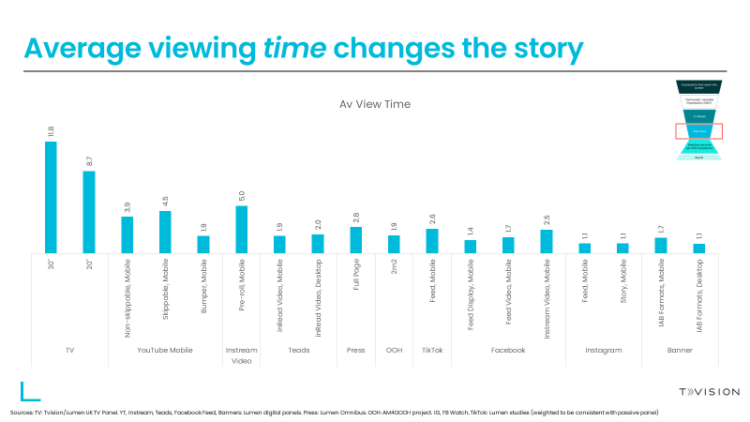 Calculating the cost of attention across media

This ‘common currency’ of attention is interesting, but becomes useful when we link it to the price paid for different media. Imagine you buy 1,000 impressions across each of a selected group of media: how much attention in aggregate would each media produce? We can calculate that by multiplying the percentage of ads that get noticed by the average viewing time, and multiplying that by 1000 impressions. This gives you an estimate of the ‘attentive seconds per thousand impressions’ for each media. 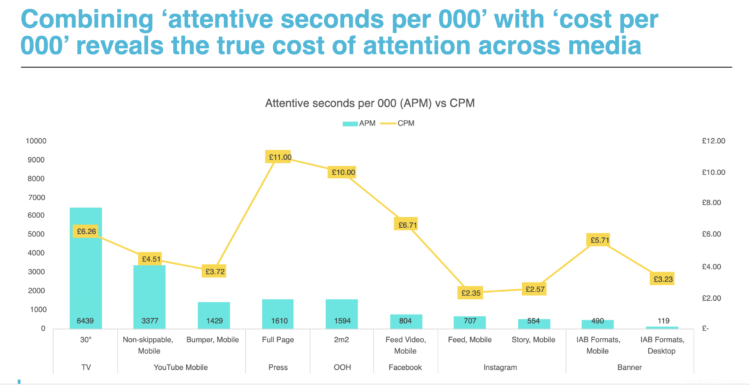 This analysis helps us understand the true worth of a TV ad. On a CPM basis, TV looks like a premium purchase. With prices like that, it had better be worth it. But when you take into account how much attention is generated per ad by TV, suddenly it looks less like a luxury and more like a bargain. Conversely, there seems to be a high price to pay for such supposedly low cost media such as digital display. You’ve to buy almost 30 digital display impressions to add up to a single 30-second TV ad, on this basis. 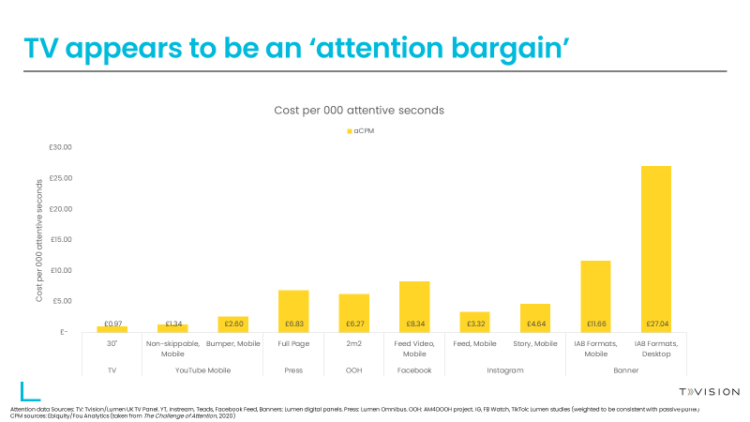 The value of TV is only magnified when you remember what isn’t included in the data. Lumen and TVision provide a currency of visual attention: but what about the impact of audio? Might many of those TV ads that receive no visual attention actually be contributing something when consumed in ‘radio mode’? And might memory formation be stronger when audio and visual combine? Analysis of the impact of TV and digital buying on outcomes metrics determined brand lift studies suggests that there are important additional benefits to TV advertising.

TVision’s data doesn’t just help us compare between media, but also within the media itself. On average, a 30-second TV ad has a 43% chance of getting noticed. However, TVisions’s data shows that there are great variations between programmes, channels and dayparts. Ads shown next to some shows gets noticed 60% of the time; ads next to other shows get noticed 16% of the time. 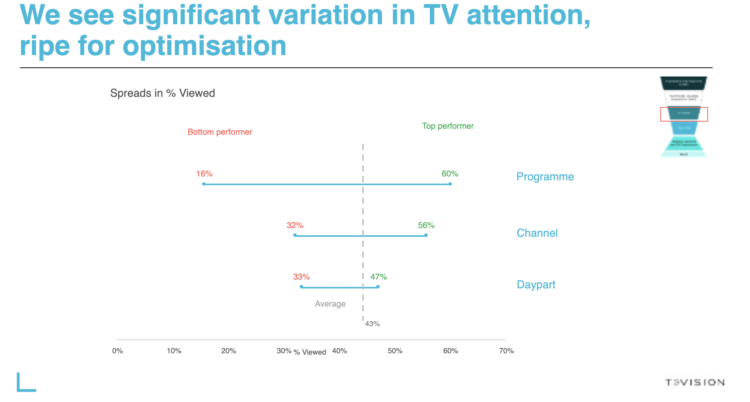 A leading indicator of whether people will notice the ads is whether they are engaged with the shows. Frequently, people’s attention to TV shows is distracted. People have the TV on in the background as they are getting the kids ready for school or finishing up work at the end of the day.

But occasionally, people sit down in front of the telly, they put their phones away and they engage with the show — and therefore with the accompanying ads. This seems to happen more at the weekends than throughout the week — and has major implications for the pricing of TV ads in the future. Lumen’s data has already revolutionized the pricing of digital media, allowing quality publishers to charge CPMs consistent with the value they create. Perhaps TVision’s data will do the same with TV, enabling greater differentiation between channels and even shows. 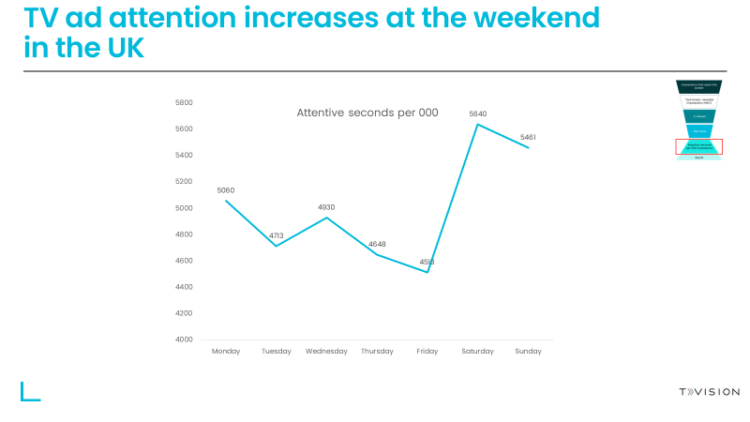 Markets are dynamic: the price ads can command in one media is relative to the going rate for ads in the other media. But now we have a common currency of attention across — and within — all the major media that allows for true like-for-like comparison. Let the price discovery begin!

Pavol Macinga, Founder & Advisor, Macinga.com, s.r.o., on 08 Dec 2022
“Hi Michael, I am again and again curious about 100% viewable in 2m2 OOH. Please, how can this be possible? TV is still king for long years..., except for some niche and younger target groups ;)”