Who calls the shots In TV documentary profiles? 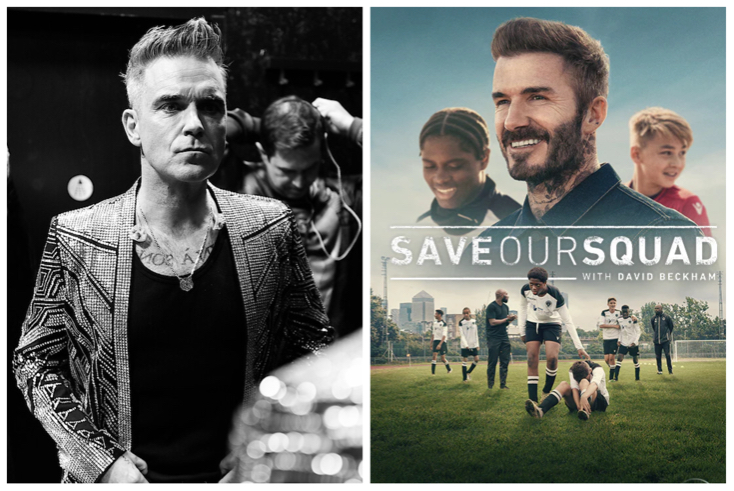 Docu-stars coining it from Qatar: Williams and Beckham

Major celebrities’ decisions to promote the Qatar World Cup are in the spotlight, but so are the streaming companies that seem so eager to feature them in softball documentaries.

‘The Let Me Entertain You hitmaker explained that while he has editorial control over the finished product, there will no limits to the topics discussed when it starts filming later this year.’
The Evening Standard on Robbie Williams’ upcoming Netflix documentary.

Recent events have highlighted a continuing issue in the TV documentary business. Is it worth sacrificing editorial control in exchange for access to so-called ‘top talent’?

One could justifiably argue that granting the likes of Mick Jagger (Being Mick, 2002), Beyoncé (Homecoming, 2019), Paris Hilton (This is Paris, 2020), Taylor Swift (Miss Americana, 2020) and Lindsay Lohan (multiple projects) is no big deal. They’re hardly politicians or criminals, are they?

And we don’t often (with some exceptions) see entertainers out of their professional environment, so a rare treat to glimpse them behind-the-scenes, as it were.

So what if they don’t want to see the less savoury aspects of their lives displayed on the screen — they’re just celebrities, so give ‘em a break.

There is some doubt whether the former Prince of Wales, 1994’s Charles: The Private Man, the Public Role, Jonathan Dimbleby’s toady-fest, which although ostensibly unofficial was given unique access, and the current Duke and Duchess of Sussex (ongoing Netflix projects) deserve such consideration. But they appear to fall into a grey area.

So, when Netflix UK went all in for two documentary series, one on former Take That dancer Robbie Williams, the other on multi-millionaire ex-footballer David Beckham, no-one was that bothered, even though both were effectively executive producers of their shows, with the likely power of veto over material.

But with the Qatar football World Cup, that lazy presumption was found to be a mistake, as Williams/Beckham’s mercenary decisions to promote the event has bitten Netflix UK squarely on the arse.

“Oh dear, how sad, nevermind,” as Windsor Davies’ Battery Sergeant Major Tudor Bryn “Shut Up” Williams was wont to say in the BBC1 sitcom It Ain’t Half Hot Mum.

Both Williams and Beckham have attempted to defend their greedy behaviour, with Williams making an even bigger prat of himself than usual with the word-salad statement:

“If we’re not condoning human rights abuses anywhere, then it would be the shortest tour the world has ever known. I wouldn’t even be able to perform in my own kitchen. Anybody leaving messages saying, ‘No to Qatar’ are doing so on Chinese technology. It would be hypocritical of me to not go [to Qatar] because of the places that I do go to. I think that the hypocrisy there is that if we take that case in this place, we need to apply that unilaterally to the world… then if we apply that unilaterally to the world, nobody can go anywhere.”

So, I guess that makes it *obscene gerund* alright, Robbie?

‘Golden Balls’ Beckham has shilled for Qatar’s spice market and general air of ‘perfection’ in TV ads, but also weighed in over recent days, pathetically claiming: “Even before this festival kicks off, more than a million lives have been touched to create an inspirational global community of coaches, educators, and new young leaders. It all began as a dream. That is now yours. So please be inspired and pass it on.”

Jesus wept. No mention of the thousands of migrant workers who allegedly died in the frenzied process to complete the stadia in time for the tournament.

Beckham is the subject of his own ‘docuseries’ on Disney+, Save Our Squad, in which he joins with an under-14’s grassroots side from East London who are in “desperate need of help”. No one at Disney seems to have wondered whether a man reportedly trousering £10m as a Qatar ambassador is quite as ‘man of the people’ as all that.

If even Sir Roderick Stewart (who actually has a knighthood) can pass on Qatar, you must wonder at the characters of the pair, who seem to be edging into Dorian Gray territory, both in terms of their well-documented efforts to appear eternally youthful and creeping amorality.

Telling also was Beckham’s refusal to engage in anyway with comedian Joe Lycett’s campaign to shame him into dropping his role as Qatari mouthpiece. Probably wise on Beckham’s part, as no weasel words could mollify critics — and there’s no way he would walk away from all that gilt. That’s for sure.

The ego has landed

Whether Robbie still holds to this statement when confronted with some of Netflix’s raw footage is another matter. He didn’t call his 1999 compilation album The Ego Has Landed for nothing.

The question for broadcasters and streamers is, does securing a big-name trump having independent editorial control?

As said, in some cases, you may say ‘sure,’ but both Beckham and Williams have form with image control issues and controversial behaviour, which could have been flagged up as obstacles to giving them any creative veto.

Presumably either a breakdown in the commissioning process, or a conscious decision to ignore the probable public reaction to Williams and Beckham’s Qatari dealings.

It looks like the shiny object of access was the decider for Netflix UK, whose US parent (lest we forget) has streamed the likes of Surviving R Kelly (2019), Leaving Neverland (2019), Broken Idol: The Undoing of Diomedes Díaz (2022) and of course…FIFA Uncovered (2022).