We can better manage media fragmentation by measuring ‘Right Reach’ 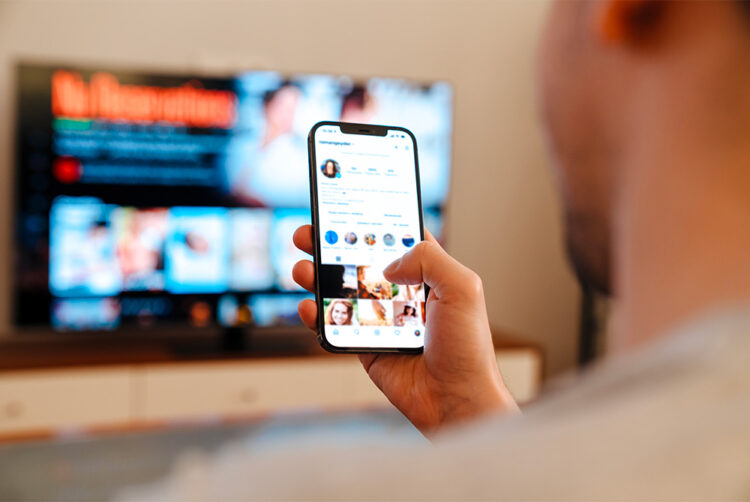 The relationship between reach and business results has eroded dramatically. We’ve found ‘Right Reach’ is a better predictor of success in a fragmented media system.

There has never been a better time to be a media planner.

Just five years ago, this was not expected. Media markets were largely predictable, and the consensus was that media planning would be largely automated and in-housed. Even MediaCom’s head of planning, Steve Gladdis, was asked if he feared his job was going to be taken by a robot.

Instead, rapid media fragmentation has created an environment in which strong planning craft has never been more valuable to advertisers.

So it’s a good time to be a media planner, but the concern is whether advertising can be as effective as it once was?

Fragmentation is fucking with our foundations

Binet & Field demonstrated through the late nineties and early 21st century, there had been a strong (r2 = 91%) relationship between reach and business effects.

But today this basic relationship between reach and business results has eroded dramatically. Indeed, for some very large advertisers, it barely exists!

Looking at the weekly reach several large brands purchased, over 18 months to two years, the relationship to brand outcomes and revenue change is very weak (shown in the table, below, in column 4). 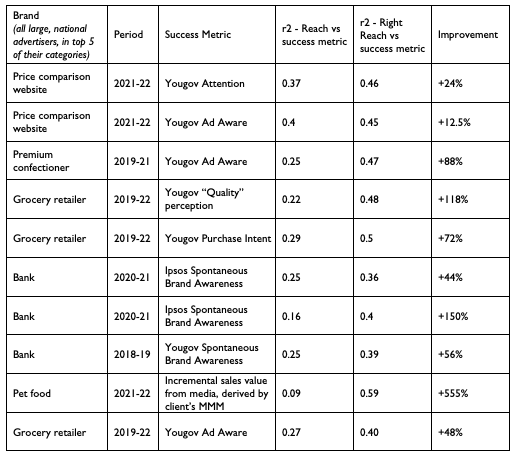 Reach (the primary KPI for most media planning) is no longer strongly linked to outcomes. And this is a big deal: A brand’s willingness to invest in advertising rests on its primary KPI being a leading indicator of business success.

The problems with reach

We all know reach isn’t created equal. An in-feed ad on Facebook won’t deliver the same impact as a 60-second ad in a cinema.

Accounting for this would allow us to express reach more accurately. Indeed, this is the holy grail of media planning; quantifying the truly effective reach associated with a media investment.

Two proposed solutions are 1) rebuilding how we calculate reach (see C-Flight and Project origin); and 2) quantifying attention, then using it to modify reach. The resulting ‘attentive reach’ being a good proxy for effective reach

Neither are panaceas. In both instances, the data available will be commoditised. No brand will get a unique view of media fragmentation from these approaches.

Relooking at reach in a fragmented landscape

Right Reach is calculated by factoring a channel’s ability to reach the target audience using a series of coefficients, based on cross-channel data.

The coefficients aim to describe a channel’s relative quality versus three insights about media effectiveness:

2. Persistence: how likely is it that the viewer is enjoying the content the ad sits next to? Highly engaged viewers are more likely to correctly recall and attribute ads to brands.

Right Reach doesn’t just consider the format’s ability to deliver impact, but also how the impactful the ad will be given the quality of the environment it sits in.

To prove this produced a better view of effective reach, we looked at the same weeks of advertising for the same brands, but this time we quantified their ‘Right Reach’ and compared it to the same outcome data.

Right Reach was consistently a better predictor of success. In some cases, it doubled a brand’s ability to forecast campaign performance accurately (see table, above, columns five and six).

And when we were able to look at how reach and effective reach related to incremental sales (as defined by the client’s MMM) we found the link between reach and sales was completely broken, but right reach correlated to sales with an r2 of 0.6.

Questions like “how to mitigate double-digit TV inflation” can be answered with a better view of effective reach.

Last winter, this method would have helped some major brands mitigate up to £10m in TV inflation over six months, whilst maintaining effective reach on a year-on-year basis.

Long-term decision making can also be improved. Applying forecasts for reach and price over three years reveals how a brand’s media mix should change to maintain effective reach.

This matters because using today’s forecasts, for brands spending  more than £20m a year, by 2025, the cost to maintain their 2021 level of reach, using the same channel mix, costs roughly an additional £15m. No CMO wants to ask for that much to stand still.

I’m convinced we can improve on this effort to calculate effective reach. Hopefully planners reading this will join that discussion. It feels vital they do: if we can increase the confidence advertisers have in the link between spend and outcomes, brands will lean into fragmentation.

And when empirical planning methods deliver that link, it means brands can evolve their media mix faster, whilst saving money through a better-informed negotiation position. 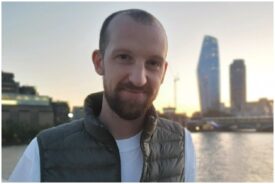 Strategy Leaders features on the Thursday edition of The Media Leader‘s daily bulletin with thought leadership, news and analysis dedicated to excellence in commercial media strategy.
Sign up for free to ensure you stay up to date.