The drive to subscribe in the video gaming sector 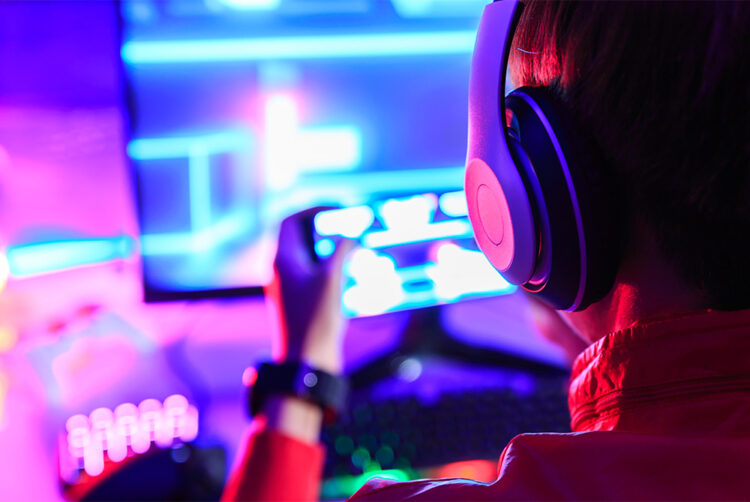 With the rise of subscription models, major mergers and acquisitions, and the dawn of web 3.0, we’re witnessing seismic changes in the video game sector.

I want to share some thoughts here on some of the sector’s major trends informed by robust research we’ve conducted here at Toluna/Harris Interactive recently.

The video gaming sector is in rude health, valued at around $200bn globally, growing across all major platforms, and profiting from a pandemic bounce when we all spent more time indoors. It’s estimated there are three billion gamers around the world now. To give an idea of scale, Fortnite, the cultural phenomenon, had 400 million registered players as of 2021, with 83 million active monthly users, generating nearly $6bn in annual revenue.

Indeed, some of the platforms are now blurring. Mobile devices are now so powerful that they can play many modern games at high fidelity and performance, and the advent of streaming “proper” games to mobile and to select smart televisions also opens up the market to a more casual gaming audience unwilling to spend a substantial sum on native console hardware. Google may have ditched Stadia, its game streaming platform, but the likes of Xbox, PlayStation and Nintendo all offer mobile streaming solutions to their customers, not as a core offering, but as a perk of subscribing to their online services.

Subscriptions aren’t new in gaming. Xbox Live Gold launched in 2013 for example. It, and its Sony counterpart, PlayStation Plus, offered perks such as “free” monthly games as well as permitting online multiplayer gaming. 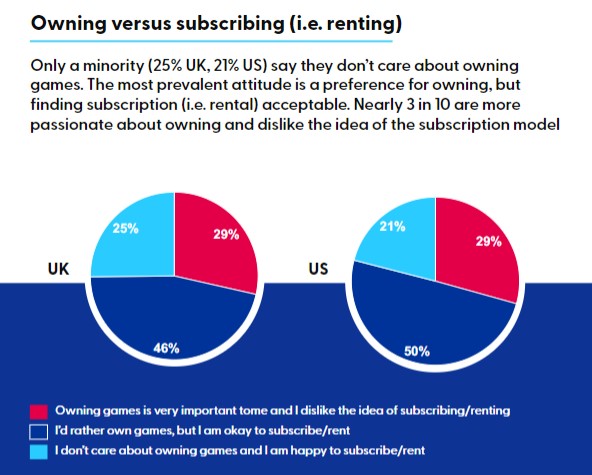 Subscription models are an increasing trend across many sectors, and gaming is no exception. Xbox has led the way with the success of its Xbox Game Pass subscription service. Launched five years ago, akin to a “Netflix of gaming”, it gives gamers access to a rich library of old and new games for a competitive subscription fee. It was recently revealed that Game Pass generated $2.9bn in revenue in 2021, around 20% of Xbox’s total annual revenue. It’s clear that Game Pass is a game-changer for the sector, literally, and it’s led Sony PlayStation to offer a similar service, a tiered revamp of PlayStation Plus.

Our research shows the great majority of Game Pass users are very satisfied and loyalty to the service. Four out of five rate it as high quality and three in four rate it as good value. These ratings benchmark well against other subscriptions like Netflix and Spotify. While the cost of living is putting pressure on how many entertainment subscriptions households can afford, we see Game Pass users would rather ditch a music subscription than give up Game Pass if they were forced to choose. 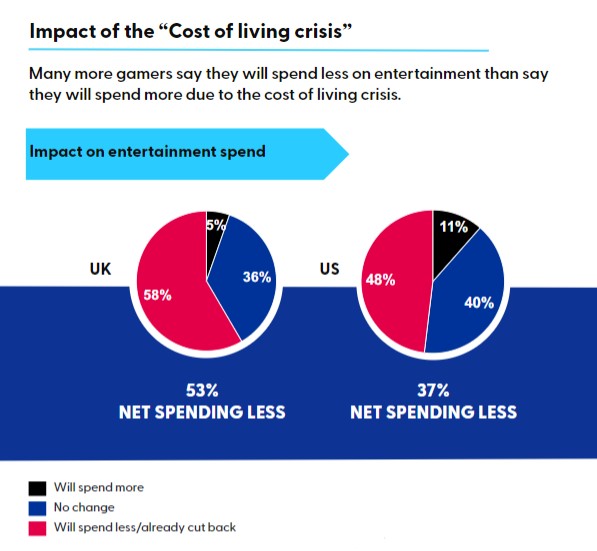 The thing with any subscription is that you effectively rent the content rather than own it outright. That’s just fine for many of us, and most of us now rely on streaming shows and movies rather than buying DVDs and Blu-ray discs. For gaming, this is relatively new, and we may have a tranche of gamers who could end up owning few or even no games at the end of this hardware generation. Compare that to older gamers who may still have cartridges and discs for older generations of consoles that will play forevermore. It’s perhaps all part of a cultural shift in younger consumer owning fewer things in life. Our research shows that most Xbox gamers still prefer to own games rather than rent in principle, but openness to subscribing is stronger than the principle to own. Around three in ten gamers are set against subscription in principle as owning is paramount in their eyes. This leaves seven in ten who are more open to subscription and while most of these also prefer to own than rent in principle, the value proposition of services like Game Pass are simply too good to pass up. All this indicates a direction of travel for subscription for the video game sector in general.

Our research shows that services like Game Pass result in its users buying fewer games — around 40% fewer games purchased in the UK for example. But this does not mean net lower spend on gaming overall. Bear in mind that the majority of gaming spend is on in-game items nowadays and the revenue generated from selling the game itself is a minority. Our research clearly shows that Game Pass broadens its users’ horizons, playing a wider repertoire of games and genres, with nearly 3 in 4 saying it has allowed them to play games they would not have otherwise tried. This then also increases the opportunity for gamers to spend more on in-game items in a wider repertoire of games. When in-game revenue is added to the subscription fee itself, it means that net spend on gaming is almost certainly higher as a result of subscribing to services like Game Pass.

The drive to acquire

So, we have more engaged and highly satisfied gamers using services like Game Pass. Subscribers’ loyalty is greatly boosted by services like Game Pass adding big games to its line-up through Microsoft’s aggressive merger and acquisition strategy. It’s already bought Bethesda, the makers of the acclaimed Fallout and Skyrim series, and is in the process to acquire Activision Blizzard, the makers of Call of Duty, for a whopping $70bn, the biggest deal in gaming history. 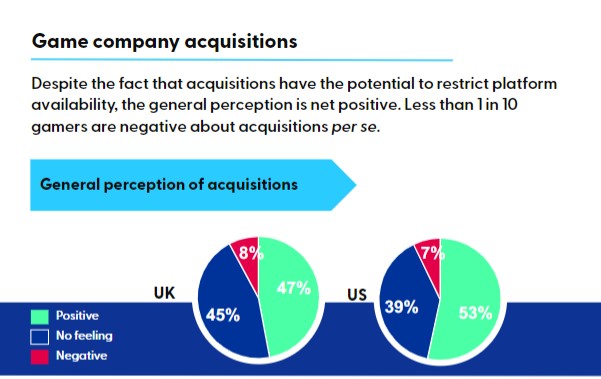 That Game Pass already accounts for 20% of total Xbox revenue means subscription really now looks like a fixture rather than a fad in the commercial gaming landscape. Adding the acquired companies’ games to Game Pass, with major new releases being added Day 1, means Game Pass will become even more compelling over time. It will be interesting to see if PlayStation can match Game Pass loyalty as the higher tier of its PlayStation Plus service does not include Day 1 releases for its major first-party releases.

The details of how much Xbox pays third party publishers to put their games on the Game Pass service is unknown. Some publishers choose to put their games on the service at launch and others choose to boost the long tail after the game has broadly exhausted its sales cycle. Certainly, some sales revenue is lost to publishers when gamers who might have otherwise purchased the game manage to play it via their subscription.

But bear in mind that nowadays the majority of gaming revenue comes from monetising in-game items, rather than selling the games outright. Games with strong and compelling monetisation benefit from being on Game Pass by opening up to a broader audience, increasing the opportunity to generate in-game purchasing revenue. The most prevalent of these games focus on online competitive multiplayer gameplay. Indeed, many of these games are now “free-to-play”, some of which generate eye-watering revenue, as while they are free-to-play, they all offer a myriad of ways for players to spend money within the game itself.

One of the most popular ways to monetise games is customisation: customising playable characters and gear. Customisation of ‘skins’, essentially changing the colour of design of costumes, armour, weapons, and in some cases making them more impactful to the gameplay, allows gamers to differentiate themselves from the crowd, flex, and to express their individuality. 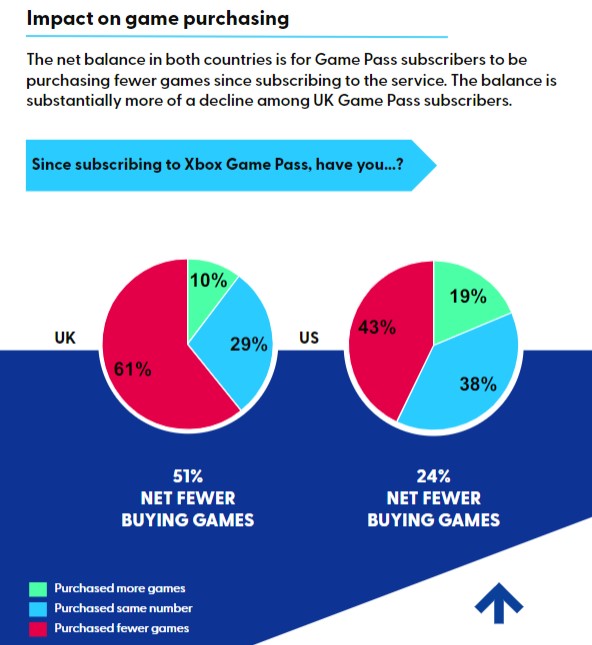 Another, more controversial way to monetise are lootboxes (which also come in the guise of card drops) where the content being purchased is a mystery until opened. Nearly two in five gamers say they have played a game with lootbox mechanics. The mechanics of lootboxes has led some to compare it to gambling, especially if the lootboxes are paid-for. one in three gamers say they are very concerned about the presence or appearance of gambling in video games nowadays, increasing to 3 in 4 who are at least slightly concerned. Note the more predatory examples of monetisation tend to bias towards free-to-play mobile games.

Virtual currency is a common way to facilitate the monetisation within games. More often than not, games employ a virtual currency in order to make purchases within games. This virtual currency can often be earned within the game for free, often associated with a “grind”, but also with the option to purchase even more instantly, without grind, in exchange for real world money. As a result, this can sometimes mask the true extent to which gamers think they are spending real money on the games.

Some gamers can spend small fortunes on such customisations and potentially buying boosts to give themselves a competitive advantage. However, this can lead to questions over the fairness to gamers, especially when it starts to become ‘pay-to-win’ and players feel pressure to make purchases to keep up. The gaming industry needs to do more to safeguard its audience, especially the younger and more vulnerable sections, as otherwise it may find national governments regulate it for them, as some already have.

Many brands have already seen the power of connecting with gaming and gamers. The gaming sector is in rude health, growing, vibrant and serving an increasingly broad and inclusive audience. It represents a fantastic opportunity for brands to get in front of an engaged audience. But brands should be wary of who they associate with. Some games and game companies are fairer to gamers than others.

In mobile gaming in particular there are exciting opportunities for brands to get exposure to gamers, not just through advertising. But if advertising, our research provides strong recommendations on what to do and what to avoid. Gamers are much more receptive to brand involvement when they receive something in return, preferably something gamers can leverage in the game being played. This contrasts strongly with ads that takeover the game, taking gamers out of their immersive experience, producing a generally negative perception.

All the main players in gaming are on the rise: Xbox, PlayStation, Nintendo, Steam, Epic, Tencent, all growing, all optimistic of the future, and many of these are opening their wallets to acquire companies, IP, franchises and talent to bolster their offer. Such optimism is borne out of the expansion of the gaming audience globally and the expansion of platforms to play, especially mobile. Moving to a subscription model has proved a success and looks set to become a fixture, something that many gamers will embrace.

Brands should consider leveraging the power of gaming to reach a broad and engaged audience but taking care to be associated with games and gaming companies who care about safeguarding their audience, and ensuring they give something back to gamers in return for their attention.

About the Gaming Report

Subscriptions, monetisation, acquisitions and NFTs in the video gaming sector – US & UK Market research report June 2022 – was created from an online quantitative panel survey conducted on Toluna Start among 4000+ active Console and PC gamers aged 16 to 45 in UK & US. Download a complimentary copy here.