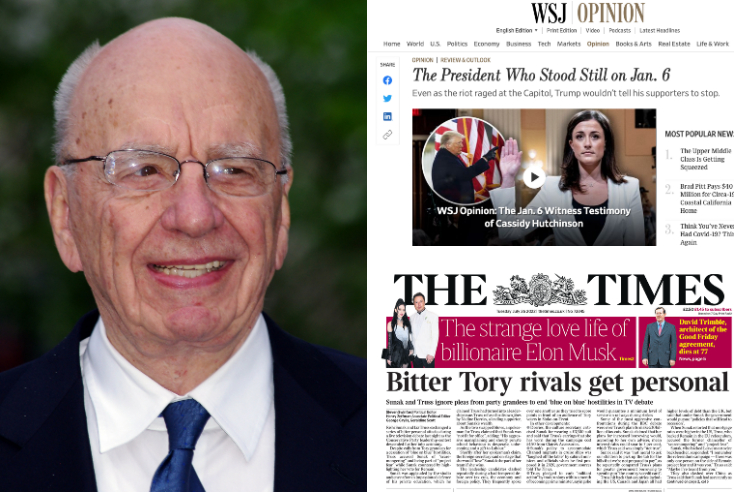 Murdoch drops support of Trump in the US, but what does he have in store for the UK leadership contest?

Rupert Murdoch has been up to his old tricks again — in the US but with the UK to come. First he distils where his business interests lie and then pursues them with ruthless precision.

As if by magic – although of course it was no such thing – Murdoch’s two big American newspapers The Wall Street Journal and The New York Post both dumped on Donald Trump simultaneously from a great height.

Editorials sharing an identical theme, expressed in slightly different language, appeared within 72 minutes of each other. You don’t have to be a conspiracy theorist to believe this was no co-incidence.

Following the end of the Congressional hearings into the violence in the Capitol on January 6 The New York Post said: “As his supporters stormed the Capitol, calling for his vice-president to be hanged, President Donald sat in his private dining room, watching TV, doing nothing. For three hours and seven minutes.” He was therefore unfit to stand in 2024.

The Journal noted that Trump had taken an oath to protect the constitution and the Capitol from a mob he told to march there.

“He refused. He didn’t call the military to send help. He didn’t call (Mike) Pence to check on his safety of his loyal vice-president. Instead he fed the mob’s anger and let the riot play out,” the Journal said.

If anyone out there has any remaining doubt as to what all of this means there was more signalling that very day. Fox News, which is usually happy to cover Trump rallies from gavel to gavel, failed to broadcast the latest Trump rally in Arizona.

Instead Fox News broadcast an interview with rising star on the right, Ron DeSantis, the Florida governor.

All of the above facts about Trump have been known since 7 January last year. So why has it taken Murdoch so long?

Why have The WSJ, New York Post and Fox News changed their tune?

It is likely that it was the strength of the evidence before the Congressional hearings, denounced by Fox News as a witch-hunt and — unlike the other US networks — not even carried live by the Murdoch channel, that made up the billionaire’s mind.

The switch has been flipped. Murdoch has decided to move on from Trump and his delusional baggage and embrace a new generation of Republicans such as DeSantis.

Trump is that most miserable of all human creatures in Murdoch’s eyes — a loser. It is not clear that Trump’s calls will be taken in Murdoch towers any more.

The advantage of DeSantis, and other Republicans like him, is that they will push Murdoch’s low tax, low regulation agenda and present it in a more rational way, and therefore one that is more dangerous for Democratic hopes of holding on to the White House.

Where does this all of this leave Fox News and its stable of unreconstructed hillbilly hosts who are still pumping out the lie that Trump was cheated out of the election?

Or, as The Washington Post put it, they will believe something has changed when Sean Hannity, one of the more rabid Fox hosts, denounces Trump.

Here Murdoch will have to be careful as he follows his economic interests. It’s unlikely there will be a sudden about turn for fear of alienating the remaining (and lucrative) Trump supporters in the Fox News audience.

More likely the Trump headbangers will be eased gently out of primetime, with more oxygen given to DeSantis and other new generation hopefuls on the Right as Murdoch tries to work out which of them will be the next Republican presidential candidate.

Meanwhile NewsGuard, which reviews the trustworthiness of news outlets, has put a red warning label on the Fox News website and that of MSNBC.

NewsGuard found high quality news reporting on the Fox site but also found numerous false and misleading claims on topics including the Russian invasion of Ukraine, 6 January, the US Elections and Covid-19 mainly by opinion hosts Tucker Carlson and Sean Hannity.

To support Sunak or Truss?

In the UK Murdoch has a slightly more difficult dilemma — does he back Rishi Sunak or Liz Truss, or neither for now, and just wait for a winner to emerge before jumping on the bandwagon?

The Daily Mail has almost certainly made up its mind in favour of Truss and her borrowing and tax cutting plans, even though Patrick Minford seems to be one of the few economists who believe they can be achieved without stoking inflation or sharp interest rate rises.

For the moment, Murdoch appears to be biding his time although The Times is looking more supportive of Sunak.

The tone of The Times coverage has been set in the past few days with a comment piece from James Forsyth arguing that if Tories want a Thatcher — and surely many of them must — “then it has to be Sunak”.

In an editorial this week, the gloves appeared to come off when the paper noted that Truss was displaying some chutzpah in running as the change candidate when she has been the longest continuous serving member of the Cabinet.

The Times also insisted the public has the right to know why she has changed her mind so often on so many important issues.

The Sun, which won’t be bothered much by such niceties, will probably move in the direction of the populist Truss — whatever the majority of economists think.

It’s not too fanciful to wonder whether the big debate between the two Tory contenders on The Sun.co.uk and Talk TV is a personal audition laid on especially for Rupert Murdoch to decide.

Having watched Sunak v Truss on the BBC on Monday night it is not clear how many in the perfectly formed electorate of 160,000 Conservative members will beat a path to Talk TV.

Unless an unambiguous knock-out blow is struck in the debate, it is likely that Murdoch will bide his time before finally reading the runes, mainly to see whether the apparent Truss lead amongst the Tory faithful holds up against the increasingly desperate Sunak attacks.

The issues here are less clear-cut than Trump trying to overturn the US electoral system so Murdoch will probably hedge his bets, as he is well positioned to do.

So The Times will go with what most of its readers would want, a fiscally responsible candidate like Sunak, and The Sun will run Truss up the flagpole as a barely plausible female reincarnation of their Dear Beloved Leader Boris Johnson.