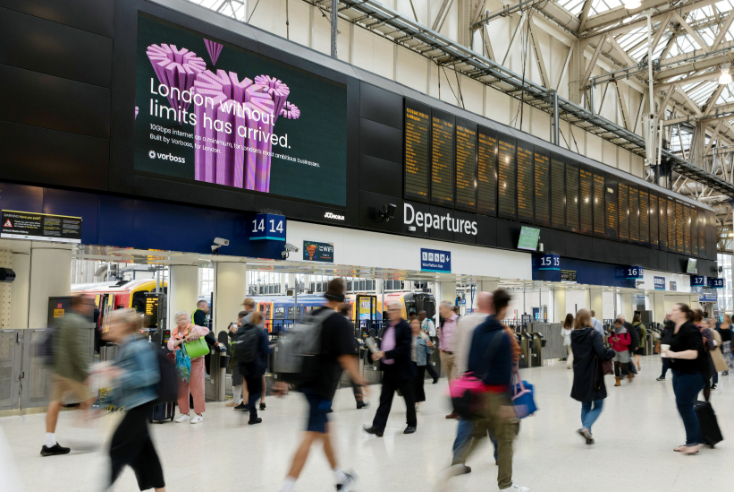 Vorboss is a London-based company which has invested more than £250m and installed 500km of fibre optic cables in the capital to build what it claims to be the only full-coverage fibre network dedicated to business.

Bountiful Cow handled the media for its launch campaign which will run for four months from September and is aimed to be “a large scale awareness drive” across the capital using a combination of out-of-home, audio, digital and business news media.

The out-of-home activation in particular marks a step-change with typical media strategy planning for business-to-business brands, as Greg Newman, strategist at Bountiful Cow, explained to The Media Leader.

“B2B typically leads most brands down a path of one-to-one account-based marketing, very performance-based lead generation, trying to build relationships that way, but it’s also a super low interest category,” Newman said. “People in commercial care about internet as much as in residential, which is not a lot until your internet stops working.”

This one-to-one approach can become very expensive and another challenge is that the window of opportunity is small.

The primary motivation for businesses to change internet service provider is if it stops working, or if the contract comes up for renewal, usually only once every two or three years, and most will go for a provider that is familiar and trusted, Newman remarked.

He added: “The media challenge is build trust, build familiarity, get remembered, because it’s so easy to just default to Open Reach, so become known and really distinctive and really famous and build trust, which is something typically done through broadcast media, public commitments and things, but do that to a really, really tight select group of people. So feeling enormous while planning really, really tiny is the brief.”

Newman said the tactic for the broadcast campaign was more akin to something you would typically use for a big national brand launch, but “really chunked down” to focus on commercial areas of London so it feels “enormous and unmissable” to the target audience.

The target audience of the campaign is “really focussed”, potentially in the low thousands at a rough estimate, namely people who organise logistics, infrastructure and contracts for commercial buildings or organisations like facilities managers, CEOs and CFOs.

To reach and resonate with this audience, the campaign “blanketed” Zones One and Two with out-of-home billboards with specialist agency Kinetic across premium digital rail and tube formats such as Waterloo Motion, large roadside banners in key locations, screens in over 60 office buildings and 13 wrapped taxis.

The billboards carry the message: “The biggest networking event is taking place under ground” alongside the strapline “Built by Vorboss, for London”.

The campaign used contextual and geo-targeting through providers like Global’s DAX to buy podcast spots across business, technology and finance verticals and online publications such as the FT, City AM, The Times and Sunday Times.

Newman said this campaign is designed to be “a consistent execution” rather than a “one-off” campaign.

He said: “It’s a long-term plan, which continually refreshes those memory structures so that as people come into market every couple of years, they get really familiar with Vorboss and when they look at their options and Vorboss shows up, they are already primed to consider it.”