The road to regaining trust 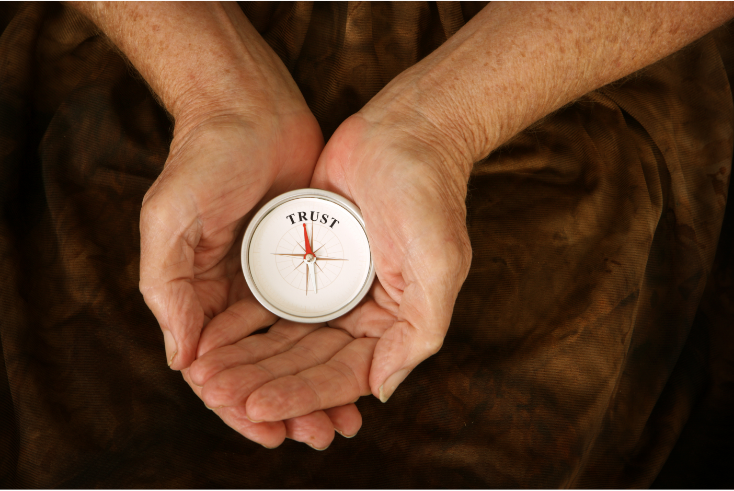 The ASA is the key to trust, but so too are better and fewer ads, says Dominic Mills

There’s a certain synchronicity to last week’s Advertising Association update on the state of public trust in advertising and this week’s IPA EffWorks festival because, of course, the two are closely interlinked: effective ads are those that start from a position of trust.

It’s more complicated than that obviously, but let’s focus on the trust side of the equation.

There’s an element of good news in the AA report. After years of decline, public trust in advertising is up again — by a quarter on a three-year rolling average since 2015 and, at 55%,  just one percentage point below where it was in 2010.

If you think about what a long and complicated journey regaining trust entails, it is clear the industry is on the right track.

As a reality check, the AA makes the point that it is still a long way below (17pp, in fact) the average trust level in other industries.

Personally, I wouldn’t obsess about that: as social media has taught us, comparing yourself to others (Instagram, Facebook etc) is a mug’s game and leads to misery.

From where I sit, I don’t find the improvement that surprising. Of the major ‘crimes’ listed back in 2018  — bombardment (including, but not confined to repetition, irrelevance and frequency), scamming, data abuse, targeting of vulnerable groups , and ‘unhealthy’ advertising (ie HFSS, alcohol, gambling ads) — the research shows that the industry is beginning to get its house in order. 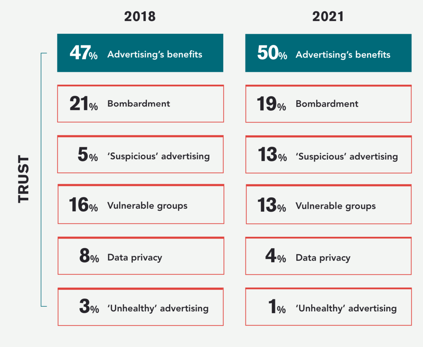 But it is far from perfect, notably in public attitudes to ‘suspicious’ or what it perceives as scam ads.

I think there are two linked explanations for this. One, during the pandemic we all spent much more time online; and two, e-commerce took off. That created a large field where bad actors could play.

As a small example, here’s a screen grab from my junk box last Sunday: about 10 CBD ads in the space of a couple of hours (my fault, I know) for checking out Perez Hilton’s gummy business last week in the name of work research. Stupid me. You can easily see how this sort of thing really pisses people off. 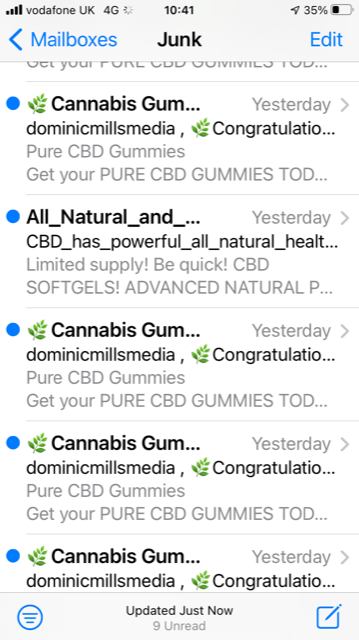 I can testify from my own experience of media consumption — online especially, but by no means only — that repetition and frequency score high on the annoyance factor. This seems to me to be one area where ad tech has consistently failed to deliver on its promise.

But looking at the bigger picture, I think there’s another reason why public trust in advertising has picked up. It’s that, on the whole, advertising had a good, and I tread lightly here, pandemic, by which I mean that most advertisers were perceived by the public to have behaved responsibly and decently in the manner of their communications: less hype, less bombast, more meaningful messaging, more empathy and, dare I say it, a more realistic definition of purpose.

Which brings us to a more existential question that, even if it is hard to address, hangs over the issue.

It is this: to what extent can advertising be divorced from the actions of the advertisers themselves?

I don’t know, and I don’t know if it’s possible to disentangle the two. But because there are large areas where the ad industry is relatively powerless in its ability to influence client actions, I have a suspicion that the industry is beating itself up a bit too much.

There’s certainly an extent which this is revealed in the AA report. Large swathes of the public consider advertising to include such areas as packaging, scam emails, sports sponsorship (all those Premier League teams with online gambling companies as shirt sponsors), window displays and random sales calls to mobiles or landlines.

Of course the public is right because as far as they are concerned it’s all marketing activity — which maybe means the French term for advertising (the catch-all ‘Le Pub’) is a better one.

Leaving those areas aside, how can the industry further improve its trust levels?

The report is clear on this. One way is by being seen to make a positive social contribution — promoting good behaviour, climate responsibility, and showing diversity, for example.

These are all areas where, in my view, the industry has made meaningful strides in the past five years.

A second is better ads. We might think this is bleedin’ obvious, and it puzzles me that it takes a survey into trust to remind us of this, but it is clear that the public responds better to ads that are creative, entertain and are useful. And, yes, I know it’s hard, but even marginal improvements would make a difference.

The third area is in regulation and, thus, awareness of the ASA.

You can see from the chart below that there is a correlation between trust in advertising and the public’s perception of the extent to which they believe it is regulated. 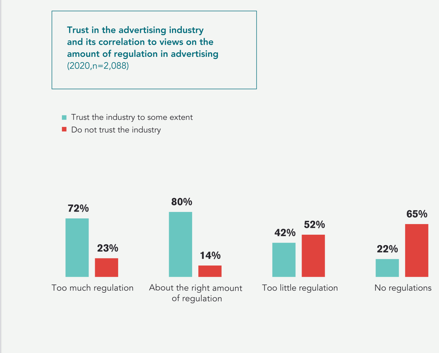 This means there is a definable benefit to be had from more focused promotion of the ASA itself, but on the downside it is a route that has some bumps ahead in the shape of problem areas like HFSS, gambling, and advertising to children and vulnerable categories of adults.

By and large, the industry’s default reaction to proposed government regulation of problematic areas is to fight it tooth and nail. Yet, the evidence suggests that untrammelled freedom to advertise is not what the public wants, and even a small victory in one area — say on the watershed — could come at the expense of a wider loss of trust.  It’s a tricky one.

So, I conclude from this that things are getting better, and although there’s a long way to go, the route is fairly well marked: better ads, fewer ads, and via awareness of the ASA, the sense among the public that a) it’s not a complete Wild West out there and b) they can complain and make their views heard.

It’s not easy-peasy, but it is do-able.

That is, of course, if you believe that trust in brands is a worthwhile objective and not, as Mark Ritson colourfully puts it, a load of “anthropomorphic nonsense”.

He uses Facebook as his example, citing the way its tone-deaf behaviour (and consequent lack of trust) has had no effect on its financial performance. Which is true, but unlike 99% of advertisers, while we may be ‘customers’ of Facebook in a loose sense of the term, we don’t actually buy anything directly from it. And those who do, advertisers, don’t seem to give a monkey’s.

Mind you, if they did, the AA might worry a little less about trust in advertising.

VicDavies, Director Of Strategy and Marketing Analytics Lab, Royal Docklands School of Business, University of East London, on 11 Oct 2021
“Might this be also down to where people were exposed to ads over the past 18 months ? Were they seeing ads on media they trusted more ? It would interesting to see if the ASA Scotland research could throw any light on this. Other research indicates context, and from that attention, matter. Does trust link with this ?”