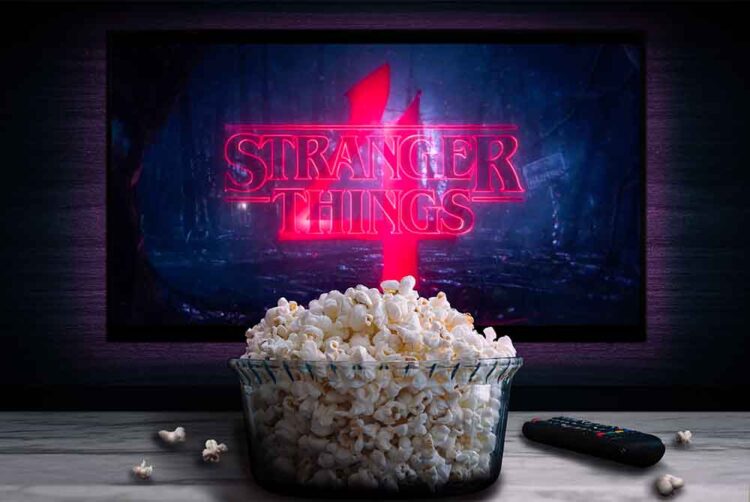 Netflix has long benefited from the illusion that it is a tech company, rather than ‘just’ a media company. History is now repeating itself as the streaming giant prepares to launch an advertising platform.

Remember the FANGs? Unless you are slightly nerdy the whole phenomenon may have passed you by. FANG was an acronym coined by the financial TV host Jim Crammer on his CNBC show, Mad Money. It referred to a group of four tech stocks that delivered incredible growth for investors – Facebook, Amazon, Netflix and Google.

Within the tech world, the term crossed from being purely about financial performance to representing the coolest of the cool tech companies. The FANGs showed the extraordinary power of tech driven disruption as industries were turned upside down overnight. Everything you thought you knew about advertising, retail and media suddenly appeared dusty and old. Anything seemed possible. 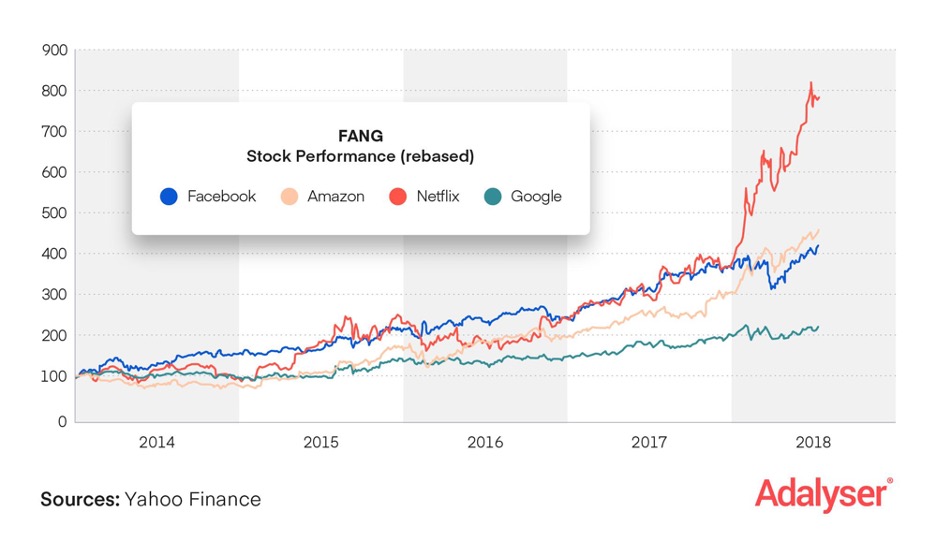 The above chart shows the stock performance of Facebook, Amazon, Netflix and Google (rebased), between 2014 and 2018. During this period, even when compared to the other three members of the group, Netflix stands out as the best performing FANG. Which is all the more impressive when you consider that Netflix is not really even a tech business.

During this period, the real genius of Netflix was to encourage investors to think of it in the same category as Facebook, Amazon and Google. This created explosive stock performance, a huge market capitalisation and access to enormous amounts of cheap money. Which was handy because Netflix needed the money to quickly create a content library before anyone noticed that, rather than being a cool tech company, it was in fact a media company dependent on producing a string of hit shows.

To be fair, Netflix did have a couple of tech-ish qualities. Firstly, because its content is delivered over the internet, Netflix was able to piggyback on the telecoms revolution that helped deliver superfast broadband. The distribution of content to end users was effectively funded by teleco investment and household broadband subscriptions. No need for an expansive dish or set-top box, just an internet connection and a web browser.

Secondly, granular user data was supposedly the secret sauce that content commissioning had been missing. Digitally-delivered content to logged in users meant that viewing patterns and behaviours could be monitored in real time. Rather than depending on film critics for feedback, Netflix could use its growing user base as the ultimate judge of which shows were chopped and which ones got a second season. Tech would give Netflix an unfair advantage over the legacy studios.

Except, the creative process doesn’t really work this way. It can’t be reduced to ones and zeros. If it could, there wouldn’t be so many terrible sequels. Unfortunately for Netflix, creativity requires an intangible sprinkle of Hollywood magic dust that means, just like the legacy studios, it is in the fragile, risky, slightly scary (for investors) business of creating hits. It’s a hit factory that is only as good as the content it produces.

All of this is important because the tech illusion is being repeated to create a content, viewer and ad platform story. There is no doubt that Netflix is a social media and cultural phenomenon. But there is an argument that social media is creating an outsized perception of how significant the content really is. Netflix execs highlight metrics such as Twitter engagement, boasting that Stranger Things had more mentions than Top Gun Maverick. The more compelling stat is that Tom Cruise’s movie pulled in more than $1bn at the box office.

The recent announcement that Netflix has signed up to BARB (Broadcasters’ Audience Research Board) is a welcome step that will provide an independent assessment of viewing using a common, familiar set of audience metrics. Interestingly, BARB has actually been tracking Netflix since late last year and its reports shine a light on how Netflix viewing compares.

The ‘smash hit’ show Squid Game was first reported by BARB late last year. It broke into the top 10 UK programmes during October 2021. But do you know which programme was one place above Squid Game? Blankety Blank (I didn’t know it was still a thing either).

At the time, Netflix fans pointed to devices (mobiles + iPads) that were missing from BARB’s measurement and viewing patterns (‘binge watching’) as an explanation. But even if a decent percentage of viewing was assumed to be missing, it would still probably rank below Countryfile.

What’s more, Squid Game’s viewing performance was an outlier. Only four other programmes from streaming services broke into the top 100 and Amazon Prime didn’t manage a single entry.

One last point on the timing of the report: it was produced as the pandemic was coming to an end, an event that is widely considered to have speeded up the streaming revolution by several years. As it turned out, the last quarter of 2021 may have been ‘peak Netflix’.

Netflix’s imminent move into advertising has generated both fear and excitement. Broadcasters publicly fret about Silicon Valley tech giants creating an uneven playing field that means they will be unable to compete. It’s as if Uber has come to town and the broadcasters are the local taxi company, sitting helplessly by, as all their customers are hoovered up. It’s a strange viewpoint that reflects a latent pessimism amongst the broadcasters about the effectiveness and quality of their own products. Content is king and in the UK content is dominated by the broadcasters.

Excitement is in the air at media agencies. Advertisers see ‘a great untapped audience’ of Netflix viewers who are walled off from them, says Brian Wieser, president of business intelligence at GroupM.

Well, Brian, when the advertisers climb up the wall and take a look into the garden, there may not be a whole lot of exciting stuff to see.

Nick Drew, CEO, Fuse Insights, on 21 Oct 2022
“There seems to be a real desire to point fingers at Netflix as if it's some sort of overbearing step-parent, "I hate you, you're not my *real* TV!". Whatever floats your boat I guess, but how about a bit of balance? >Unfortunately for Netflix, creativity requires an intangible sprinkle of Hollywood magic dust that means, just like the legacy studios, it is in the fragile, risky, slightly scary (for investors) business of creating hits. It’s a hit factory that is only as good as the content it produces. You know which company made a profit of $1.4bn just in the last quarter? Sure, it's a risky business, but let's not pretend Netflix is WeWork here - it's obviously doing some things pretty well. >But do you know which programme was one place above Squid Game? Blankety Blank (I didn’t know it was still a thing either) [...] it would still probably rank below Countryfile. Fair point, and I frankly want to see this new Blankety Blank. But whether those numbers are good or bad, marketers can't actually advertise on Countryfile, so might look slightly further down that list (of the 10 most-watched programmes, let's not forget) to find a show they *can* put their money against. Netflix's move to invite advertising has clearly put more than a few noses out of joint; more importantly it's a huge gamble on both the consumer and brand sides, and there's a decent chance it may fail in spectacular fashion. But perhaps we should see how it actually develops before writing off the business nous of those making these decisions.”