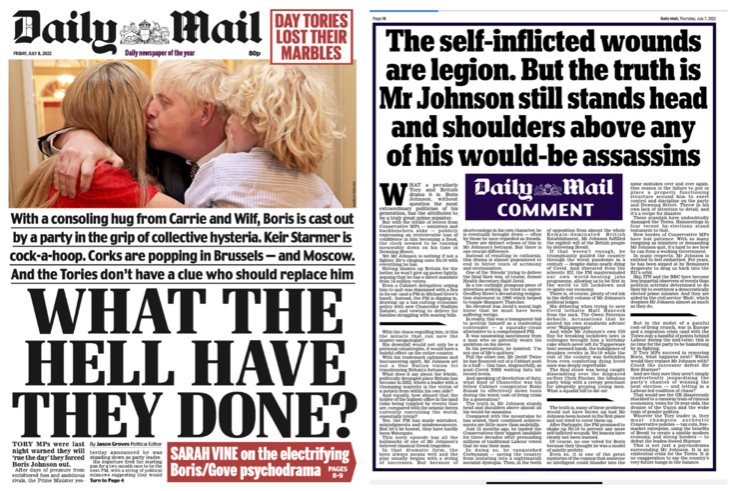 Once again the Mail is backing the wrong horse and a terrible reckoning is likely under a Liz Truss Premiership.

To the superficial eye the Daily Mail is what it has always been, a self-confident expression of never-ending support for a Conservative view of the world, promoting simple certainties where everywhere around lies increasing complexity.

Yet as the Conservative Party in the House of Commons moved further and further to the Right, the Mail has always already been there to greet it and urge it further onwards on the Right-wing journey.

There is now a very serious question facing Lord Harmsworth, owner of the Mail under the editorship of Ted Verity, with Paul Dacre pulling the strings as editor-in chief. It is whether the Mail has been taken up an increasingly narrowing cul-de-sac appealing to a diminishing group of the very old, the very Right-wing and sometimes, frankly nutty, minority.

His father Vere, speaking in a different age, thought the Mail spoke with the voice of middle England; for those who perhaps had one A-Level but who hadn’t gone to university and represented the conservative majority.

There is growing evidence that the contemporary Mail is out of step, not just with mainstream public opinion but an increasing number of Tory voters, too. This is apparent across a wide range of issues, from Boris Johnson and Liz Truss to Brexit, the cost-of-living crisis and even the ownership of utilities.

The deification of Johnson — in the face of all the evidence and including a second holiday this month while the UK suffers a worsening cost of living crisis — is the most dramatic example of being out of touch.

The Mail has never waivered in its support for Johnson before, during and after his leadership crisis from the “What Have They Done?” splash headline to wistful longings that somehow he might one return in some sort of South Seas cargo cult.

The latest hell and fury has been unleashed against those Tories sitting on the Privileges Committee about to carry out a very necessary investigation into whether Johnson misled Parliament over Partygate.

To the Mail, this is both a “witch-hunt” and a “kangaroo court”. Such Tories, according to the Mail, would “do the right thing and quit this ridiculous charade” if they had any sense of honour.

The trouble is, the British public decided a long time ago that Johnson broke the Covid lockdown rules repeatedly and lied about it. He didn’t just lie to the country, but to the House of Commons. The latter offence runs the risk of expulsion.

The evidence is there in the polling, according to political expert Sir John Curtice writing in the first book published on the demise of Johnson:  Boris Johnson: Media Creation, Media Clown, Media Casualty (for transparency, I’m also a contributor).

As Sir John argues, soon after the leaks 78% of people believed there had been a party, with 75% believing the rules had been broken.

Johnson’s credibility began to suffer almost immediately, with 68% telling YouGov he was not telling the truth, including 46% of Conservative voters.

By the beginning of this year, just 23% of voters approved of how Johnson was handling his job and just before his fall, despite a Ukraine boost, the Conservatives were at 33% — six points behind Labour.

According to Sir John: “Johnson’s electoral magic had seemingly deserted him.”

Johnson was unable to survive the Pincher row because it was merely another example of how Johnson was prepared to bend the rules for no good reason and could not be relied on to tell the truth about what he had done.

“And whatever their past achievements, a politician who is neither respected nor believed is bound to discover that they have come to the end of their shelf life,” Sir John Curtice concludes.

All this for a peerage?

Despite everything, the out-of touch Daily Mail continued to believe, and probably still does, that Johnson was the best person to beat Labour leader Sir Keir Starmer.

The paper’s search for a replacement has inevitably taken it to new problematic places in the shape of Liz Truss. Few economists believe that a Truss tax cut will help those most in need from energy price rises and there is a problem with the age profile of Truss supporters in the Conservative Party.

Truss has a 40% lead among Conservatives members over the age of 65, while Rishi Sunak has an 8% lead among the under 40s.

Once again the Mail is backing the wrong horse and a terrible reckoning is likely under a Truss Premiership. At the moment the government is seen as competent by only 13 per cent of the population. What if Truss rakes that number even lower?

The numbers are also running in the opposite direction on many of the Mail’s core beliefs — everything from Brexit to privatised utilities.

A Daily Express poll (not one of the scientific variety, of course) found that no less than 94% of its readers believed they had not got the Brexit they wanted or expected. What they wanted is another issue, but at least this signal confirms a general dissatisfaction with how things have turned out.

The more respectable polls suggest that 58% of Britains now think Brexit was a bad idea and there is a majority who wish to rejoin the European Union.

As the UK plunges into 19th place for growth in the G20 — only just ahead of Russia – and as wages fall when we were promised higher incomes, times will be tough for a newspaper which uncritically saluted the flag of failing politics because Johnson was “a winner.”

The latest Survation poll on attitudes to the utilities and public ownership should also alarm a newspaper like the Mail. More than two-third (69%) of the public believe water should be in public ownership, with rail on 67% and energy 66%.

The Mail might also note that support for a publicly-owned NHS is no less than 78%.

The Hon Jonathan Harmsworth is known as a loyal sort of a person but is he really prepared to sit and watch as the great paper his family founded stumbles towards irrelevance? All that just to ensure that Paul Dacre gets a peerage from Johnson, which might be blocked anyway?

A wise proprietor of the Mail would commission, if the information is not already to hand, a detailed study of the current social and political beliefs of Mail readers with their age profiles.

Such a study might find that there are many Mail readers driven to distraction by the nonsense that daily spews out from its pages that reflect so little of current realities.