Is Boris on the brink? 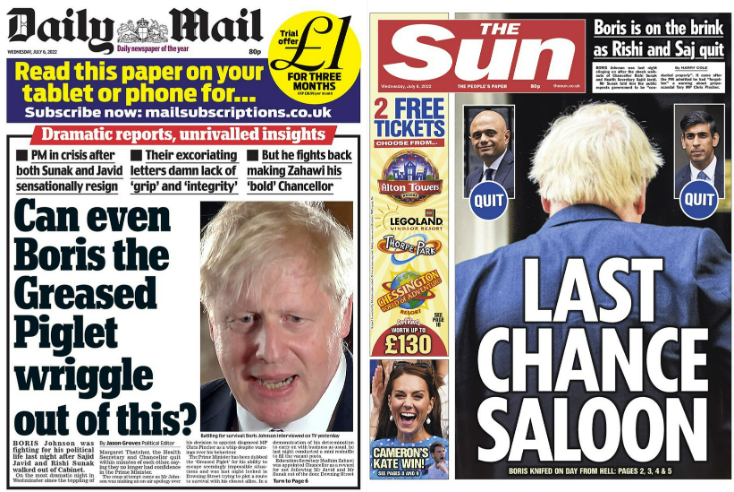 After two senior cabinet resignations and another scandal, how long will his right-wing cheerleaders in the press continue to support him?

The headline of the day is “Boris On The Brink” although The Sun went for “Last Chance Saloon” while The Daily Mail asked the crucial question: “Can even Boris the Greased Piglet wriggle out of this?”

Also on the brink following the resignations of Chancellor Rishi Sunak and Health Secretary Sajid Javid is the continuing support of the right-wing national newspaper for the leadership of Boris Johnson.

If the curious affair of the disgraced deputy chief whip Chris Pincher turns out to be the scandal that finally brings down Johnson, the irony will be complete.

It will have been Johnson’s most loyal cheerleaders, The Daily Mail, The Sun and The Daily Telegraph which have done the most damage, although the actions of retired senior civil servant Lord McDonald may have applied what could turn out to be the coup de grace.

It was The Sun that first broke the story of the Tory whip who groped two men in the Carlton Club after a drunken rampage, and carried the resignation letter of the MP who admitted that he had “drank far too much” that evening.

So far so embarrassing for the Prime Minister.

But it was The Mail on Sunday that really put the boot in by revealing Johnson knew of lurid allegations about Pincher two years before the Prime Minister promoted him to deputy chief whip and a role supervising the behaviour of other Conservative MPs.

According to The Mail On Sunday, Johnson described Pincher as “handsy, that’s a problem. Pincher by name, pincher by nature.”

Downing Street then issued the usual denials although no Cabinet ministers appeared to be willing to take on the task of defending the PM in the broadcasting studios on Monday morning.

Instead Children’s Minister Will Quince—hardly a household name—was sent out with a “categorical assurance” that Johnson had no specific knowledge about Pincher’s behaviour before the promotion.

The Daily Telegraph, which has been increasingly critical of Johnson in its reporting in recent weeks, wrote of a Cabinet backlash at being asked to defend Johnson’s handling of the scandal.

One, according to The Telegraph, compared the situation to the sleaze scandals that dogged the latter years of the Major Government.

“It just increases the feeling that we are in late John Major-era territory even more—when you are trying to appease people you are more inclined to turn a blind eye to bad behaviour” the senior figure said.

A letter from Lord McDonald

Then came Lord McDonald’s letter sent to the Parliamentary Standards commissioner, but published on Twitter and followed up by a measured but still explosive appearance on BBC Radio 4’s Today programme.

McDonald emphasised that it “simply was not true” as Downing Street had been briefing that no official complaints had ever been made against Pincher.

This morning I have written to the Parliamentary Commissioner for Standards – because No 10 keep changing their story and are still not telling the truth. pic.twitter.com/vln9FU4V50

In 2019 when Pincher was a Foreign Office minister, officials had complained about behaviour similar to that at the Carlton Club.

An investigation upheld the complaint and Pincher apologised and promised there would be no repetition.

Most tellingly of all, Lord McDonald said the Prime Minister had been personally briefed by a senior Cabinet Office official about the initiation and outcome of the investigation.

The former civil servant decided to go public because he decided the truth mattered.

The latest line to come out of Downing Street is the unlikely explanation that Johnson had forgotten about the briefing combined with the usual apology for the cameras.

It is likely—even though only two senior Cabinet resigned—that this is the incident that will finally undermine Johnson’s support among Conservative MPs.

What’s next for the press?

The big question is how long will Johnson’s right-wing cheerleaders in the national press continue to support him?

The Daily Telegraph already semi-detached before the resignations.

There are signs that the ardour of The Daily Mail is starting to cool. The Mail On Sunday issued a dire warning to Johnson telling him to “get a grip” or the latest bogey men—“the Blairite elite”—would destroy the country in cahoots with the Lib Dems.

In words the paper has never used before about their Dear Leader, The Mail On Sunday said: “the Pincher affair, in which he has been slow to act and has made feeble excuses for his supposed ignorance of the problem, has made him look weak and foolish. There is no more room or time for this sort of unprofessional messing about.”

If further emphasis was necessary the paper added that for the sake of Britain, Boris Johnson and the Parliamentary Conservative Party have to rediscover “discipline, purpose and competence—and quickly.”

It sounded very much like a final warning and came in the wake of reports that Lord Rothermere, The Mail proprietor, had intervened with his editors, including editor-in-chief Paul Dacre, telling them the papers had “lost all touch” with what their readers were thinking about Boris Johnson.

And yet The Daily Mail is still sticking to what increasing looks like a lost cause: the belief that Boris Johnson remains the only Tory capable of winning the next election.

“For all his recent troubles—some self-inflicted—this paper unequivocally believes Boris Johnson is the right man to lead the party and the country,” The Daily Mail argued.

An early departure for Johnson would have unfortunate personal consequences for Dacre—the promise of a peerage could evaporate along with Johnson’s demise.

The Sun coverage has been rather low key after its initial scoop with a modest story yesterday including the Downing Street change of tone with the admission that the Prime Minister may have been aware of media reports on Pincher.

Unsurprisingly the paper preferred to splash on the rape allegations against a Premiership footballer and monstering Sir Keir Starmer’s “Barmy Brexit” policy.

Rupert Murdoch only likes winners because winners can be useful and he is also ruthless as his fourth wife Jerry Hall can testify.

Once Murdoch has decided that Johnson is a loser the call to The Sun will be made.

That was yesterday. Today the tone of The Daily Mail is close to a political obituary, highlighting his past achievements as they see it.

“There may yet be a way forward for Boris. If he is mortally wounded, however, those challenging to take his crown should remember only under a government working to true Conservative principles—low taxes, free markets and exploiting Brexit to the full—can Britain prosper,” the paper says.

The Sun was almost in despair. “Time is running out for Boris Johnson. After the chaos of yesterday, the Tory Party might now decide time’s already up,” the paper admitted.

Now tax cuts will follow as will another vote of confidence before the summer recess in 10 days.

Johnson will indeed be a remarkably greased piglet if he retains the support of the Tory press and survives for those dramatic 10 days.