How will the press treat newcomer Truss? 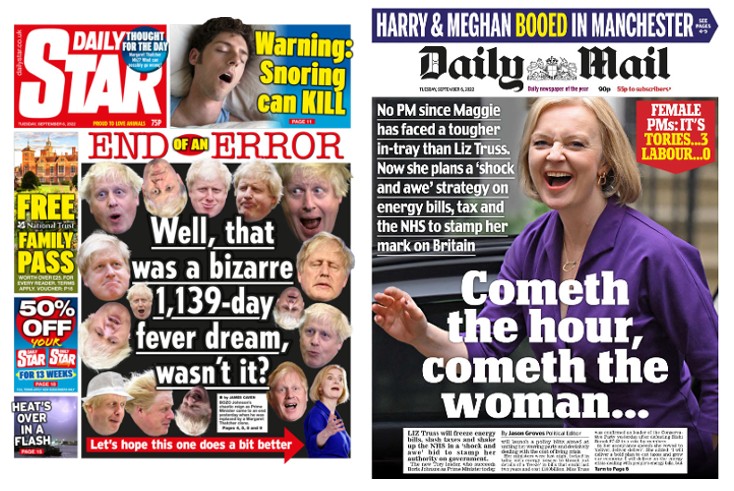 The papers which deified Johnson and blithely ignored his faults, foibles and failures will now devote endless efforts to pump up a winning persona for Prime Minister Liz Truss.

The finest thing that Nadine Dorries did as Culture Secretary — was to write her resignation letter.

Those who have watched the 20 Secretaries of State for Culture, Media and Sport stretching all the way back to David Mellor in 1992 can record serious figures such as Jeremy Hunt and Virginia Bottomley, Chris Smith, and Tessa Jowell. Many of the others were anonymous figures rapidly moving on to somewhere else or simply disappearing.

There can however be no doubt that the worst of them all, judged by the damage they have done, is Nadine Dorries. She had passionate certainties, such as a determination to privatise Channel 4, which led her to ignore all the evidence suggesting this was a profoundly mistaken idea.

In the end she did not even know how the creation of Margaret Thatcher and Willie Whitelaw was financed.

The reason why her resignation is so important is the most obvious reason of all – it creates a vacancy.

The fate of Channel 4 may rest with Mordaunt

It would have been strange if Prime Minister Liz Truss, who will have many things on her mind, had gone out of her way to humiliate Dorries on the issue if she had still been in office.

A vacancy, and, for a time the hope that it will be filled by Penny Mordaunt, a measured and appropriate reward for someone who came third in the leadership shoot-out, would have been a different matter altogether.

Truss, who has said she has not finally made up her mind on Channel 4 privatisation, might have been willing to delegate to Mordaunt, at least the freedom to look again at the privatisation policy, as she gets on with borrowing the £100 billion to deal with the energy and cost of living crises.

Alas it was not be as Mordaunt took on the more senior role of Leader of the House.

The former minister for disabled people has in the past been fulsome in her praise of Channel 4’s coverage of the World Para Athletics Championships and the channel’s encouragement of disabled talent.

Mahon has made it equally clear a privatised Channel 4 would be unlikely to bid for Paralympic broadcasting rights, which could take such events off national television.

Mordaunt’s views as a senior Cabinet minister might still be decisive.

The views of the new Culture Secretary Michelle Donelan on Channel 4 privatisation are difficult to discern but the fact that she is a former minister of state for higher and further education and education secretary for two days would suggest she might be more amenable to rational argument than Nadine.

As for Dorries, it seems she may even have to wait for her peerage. A by-election in her mid-Bedfordshire constituency, which had only got a Conservative majority of 24,664, might be deemed too risky at the moment.

Returning to the plough

At least there was a bit of class, and classy, classical reporting to mark the departure of Boris Johnson, a leading contender for the title of worst British Prime Minister of modern times, or indeed any times.

In his farewell performance at the Downing Street rostrum there were the usual lies, half-truths and circumlocutions topped off by a bit of nonsense about being like a booster rocket blasted off into a remote corner of the Pacific.

Then came the telling reference to the Roman dictator Lucius Quinctius Cincinnatus.

“Like Cincinnatus I am returning to my plough,” said Johnson, and in this case the plough and farm of the Roman statesman meant a return to book-writing and journalism.

But top marks to the editors of Radio 4’s Today programme who had the illustrious Mary Beard on live within half an hour to explain exactly who this geezer Cincinnatus was, and what Johnson was on about.

Beard happily explained that although Cincinnatus did indeed leave Rome and retire to his farm he returned again to power when Rome was under threat, possibly even twice.

Boris Johnson’s last little departing joke? Or was it?

As for the “plough,” Johnson has made it clear that now he is liberated from his pittance of his Prime Ministerial salary of a mere £161,401, he wants to make lots of money.

This will come partly from the usual memoires although worries about whether he will be prepared to be either candid or honest enough could limit the size of the advance.

Then there will come the weekly newspaper column – surely more likely to appear in The Daily Mail than The Daily Telegraph.

There again it will be interesting to see how he reconciles his promise of undying loyalty to the Conservatives and Prime Minister Truss with having to come up with writing controversial, weekly political journalism.

The pangs of bitter regret

The period of intense mourning for their lost hero Boris Johnson in the right-wing press, which from time to time verged on the deranged, has now come to an official end, but the pangs of bitter regret are still there for all to see.

On the front pages now it’s all about Liz Truss: “Cometh the hour, cometh the woman…” said the Mail.

But inside, a call for Tory MPs to unite behind Truss, is accompanied by an attack on how the Parliamentary Conservative Party conspired with Johnson’s enemies to bring him down.

These poor wretched Tory MPs inexplicably betrayed their most potent electoral asset, whatever the polls may say. They not only succumbed to an outbreak of collective hysteria, but were cowed by a relentless Twitter tirade from the left, a hostile broadcast media and “the massed rank of embittered Remainers”.

The Daily Express seems more ready to move on with its plea to “Put Faith In Truss To Deliver For Britain”, while The Sun, without so much a backward glance, insists that Truss “is the radical PM we need for this crisis.”

The Sun says that when Truss promises to govern as a Conservative “ we do not doubt it,” although the paper fears Truss will have precious little time to improve people’s lives and convince voters to give her five more years.

“We pray she can do both. She has our support and we wish her great success,” says The Sun who was on the winning Truss bandwagon early on.

The prize for the best “Bye Bye Boris” headline has to go to The Daily Star.

Overall the papers which deified Johnson and blithely ignored his faults, foibles and failures will now devote endless efforts to pump up a winning persona for Prime Minister Liz Truss.