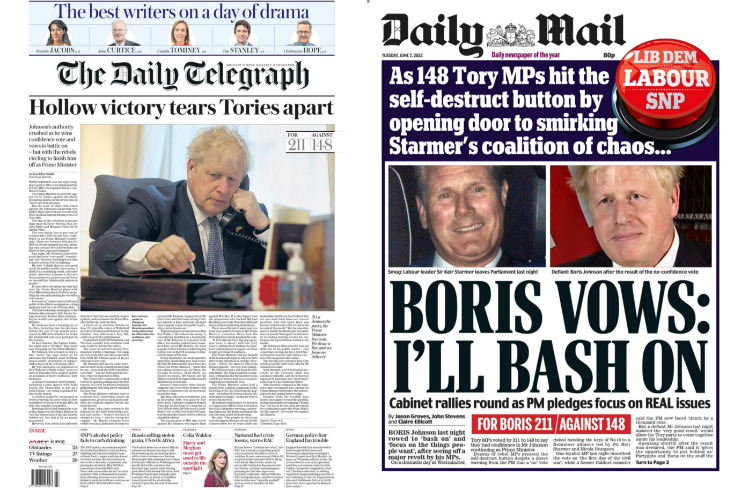 The papers’ coverage of the Vote of Confidence crisis is only a warm-up to the day Boris Johnson leaves Downing Street.

If you were trying to devise a simple scientific experiment to demonstrate the range, variety, diversity, or as some would have it, the bias of British national newspapers, look no further than coverage of a confidence vote for the leadership of the Conservative Party.

The rules could not be clearer. Once 15% of Conservative MPs, in this case 54, submit letters asking for a vote of confidence, they get one. They vote for two hours in a secret ballot, the votes are counted within one hour and the result announced.

In this case 211 members of this very special electorate expressed their confidence in Boris Johnson as leader of the Conservative Party and Prime Minister, while 148 voted against.

From such straightforward, almost elemental facts cue astonishing differences of interpretation and analysis in the papers running all the way from the certainty that Johnson can now put all his troubles behind him, through to Johnson clinging on, to the end is nigh for the Prime Minister.

As usual the most revealing reactions came from the four most loyal Conservative-leaning newspapers, The Daily Express, The Sun, The Daily Mail and The Daily Telegraph (pictured, main image and below) all of which tend to support, to varying degrees, the narrative of Boris Johnson The Winner. 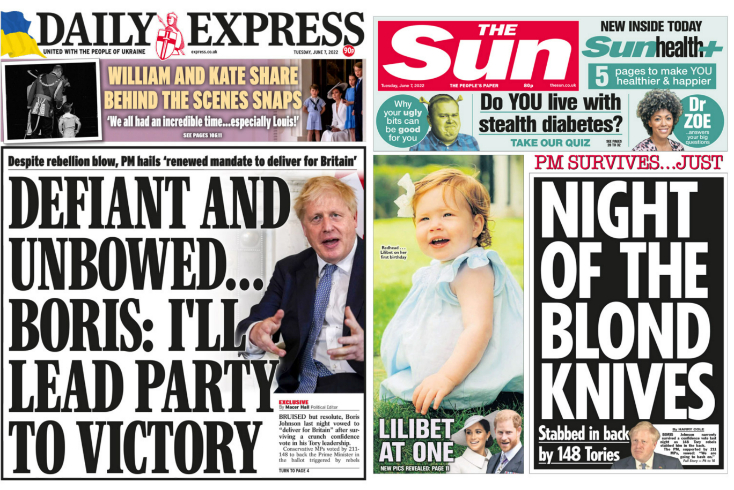 The Express takes the main prize for loyalty by accepting uncritically the Prime Minister’s view that the 211-148 win gives him a “new mandate to deliver for Britain.”

The splash headline is a perfectly constructed example of the species: “Defiant And Unbowed…Boris: I’ll Lead Party To Victory.”

The paper’s leader comment will surprise some with its description of Johnson as “ a serious politician and leader” who was right about supporting Brexit “and then getting Brexit done with a very good deal with the EU.”

The Daily Telegraph, which has done more than another paper to create the phenomena that is Boris Johnson, and to where he might one day soon return, was much more realistic and questioning.

The paper did not mince its words and wrote of Johnson’s “hollow victory” which could tear the Conservatives apart and now left him clinging on to power.

The Sun and The Daily Mail instinctively turn their fire on the same enemy – the 148 Tory MPs who expressed a lack of confidence in their man.

For The Sun Johnson was “stabbed in the back by 148 Tories” while The Mail produced a print crescendo on its front page: “As 148 Tory MPs hit the self-destruct button by opening door to smirking Starmer’s coalition of chaos…Boris Vows: I’ll Bash On.”

The Sun was also very cross about the Tory rebels and called it a rebellion mostly by panicky faint hearts- with no stomach for the fight.

“Scores spinelessly buckled to the incessant Partygate negativity, a few months of dispiriting mid-term polls and even more pathetically to the PM being booed in Labour’s London stronghold,” the paper argued.

Entirely missing was any attempt to explain why 148 MPs from every wing of the Conservative Party should feel strongly enough to try to remove Johnson from office, or why The Daily Mail is so wedded to that particular Prime Minister.

It is very likely that another Conservative PM who does not lie repeatedly, mislead the House of Commons routinely and obeys the law would have a far better chance than Johnson of winning the 2024 election.

You can see why Keir Starmer is “smirking” in the picture, although in fact it seemed a perfectly normal smile.

Apart from Starmer’s smirking The Mail naturally denounced the “snakes” plotting in hushed tones in every cloister.

The well-respected former minister Tobias Ellwood, who had enraged Tory Brexiteers by arguing that the UK should rejoin the Single Market to ease the cost of living crisis, was described as a “ slippery weasel,” who seemed to be everywhere “lurking and scheming.”

The Mail reserved its greatest rage for the bookies favourite to succeed Johnson, the former Foreign Secretary Jeremy Hunt.

The Mail must think Hunt has a very serious chance of replacing Johnson to devote a double page spread of bile to the perfectly amiable and mainly rational politician.

He managed to be at the same time “a pound-shop Machiavelli” and a Theresa May in trousers plotting with his gang of embittered Remainers for more than a year.

The Sun was right of course to mention, in passing, the fact that Boris Johnson had received a right-Royal booing on his way into the St Paul’s Thanksgiving service and on the way out.

There were boos and jeers- though Culture Secretary Nadine Dorries insisted she heard only cheers- and they were so loud that BBC commentator Jane Hill mentioned it during the live coverage.

“There is quite a lot of booing actually … a substantial amount,” she said.

It was an important, symbolic political moment. A Prime Minister being booed on his way into a religious service to mark the Platinum Jubilee of Queen Elizabeth is quite something.

Far from being an expression of “Labour’s London stronghold” it is far more likely that coming from a Royalist conservative crowd it is an indication just how unpopular Johnson now is with the general public.

It looked like a turning point and may indeed have influenced the thinking of some of the 148 “rebels.”

Unfortunately although the booing could scarcely be missed on the live coverage, for some reason no mention of it could be found in either The Sun or The Daily Mail.

Yet there was nothing wrong with the hearing of Sun reporters covering the service. They managed to hear that when Harry and Megan arrived at the Cathedral “the couple were greeted with some boos outside St Paul’s.”

The Boris boos also managed to spark an online BBC controversy over whether there had been an attempt to downplay the booing by the Corporation. It was certainly reported and commentated on by various BBC services.

However in later coverage the eagle-eyed, or more properly eagle-eared, noted a toning down of the booing and a change of commentary.

Unlikely. One former BBC specialist said it was just normal tidying up as the coverage moved on. Another equally qualified broadcaster said it was far from normal.

So the Scottish verdict of not proven is probably appropriate, although no prizes either way for political awareness.

One piece of media research inevitably leads to another.

So the next task is to compare and contrast the coverage of the Vote of Confidence crisis with that on the day when Boris Johnson leaves Downing Street, a day that may not be so far off.