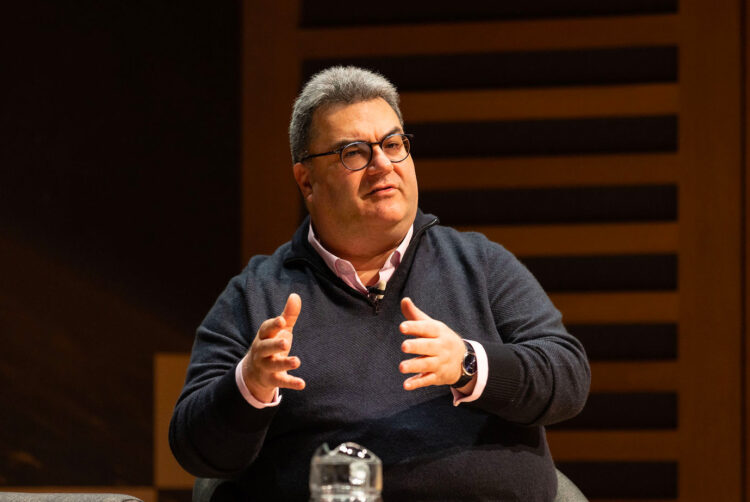 The benefit of Sky Glass and Sky Stream – according to Béhar – is that 100% of advertising is targeted. The introduction of a 4K camera into future Sky Glass TVs means “you have a lot more data”. This will enable greater targeting based on who and how many people are in front of the screen, and what they want to see.

He continued: “Obviously this will be fully GDPR compliant. Earlier I joked that there will be 28 levels of opt-ins to make sure it’s really working everyone, but we think it’s going to take advertising one step further.”

Béhar also highlighted the new viewing experiences the camera will make possible, such as co-watching football matches or movies with friends, or participating in exercise activities like Yoga, with the high-quality camera facilitating posture correction. Béhar said Sky aims to establish Sky Glass as the centre-piece of consumer homes, and bring content discovery, merchandising and consumption in one place.

Despite coming economic headwinds, Béhar believes TV will remain vital for driving demand. He said: “TV is indispensable for driving demand and demand is what we’re all going to need in a cost-of-living crisis. All of our market research says that TV makes any other channel and any other media after TV, work harder and better.”

He predicted that, as people continue to feels the effects of the cost-of-living crisis, TV will become even more important for people’s daily entertainment. Béhar remarked: “The cost-of-living crisis means people’s disposable incomes may literally be divided by a factor of three or four. That means television and the home becomes the central place for entertainment going forward. We’ve done a lot of market research on that front. Restaurants are going to get cut [from household budgets] and going to the movies risk being cut as well. Television is going to be a place where people convene together as a family and therefore context is going to be even more important than before.”

While Béhar believes economic recession will mean a challenging year for the TV advertising trade, he also thinks that Sky “may have some cushion” against the worst effects in some of its other European markets, such as Italy or Germany.

Béhar also spoke about how the company is using C-flight data as part of its optimised planning tool to give advertisers an ideal media mix for total TV campaigns. The idea behind the tool is to offer agencies and advertisers the ability to have true unduplicated reach across linear TV, BVOD and digital, and to plan campaigns across those channels.

He said: “All those channel are audited, and second-by-second – that’s very important for the ability to do real-time planning, so advertisers can change their plans in-flight as they see the data coming back. It’s a big part of our CapEx investment and we’re blessed that ITV and Channel 4 have embraced it as well. We see it, really, as an industry tool.”

According to Béhar, Sky is also working with advertisers to link ad spend to outcomes. He elaborated: “We are working with Amazon to link their advertising on television to their outcomes in terms of e-commerce. That’s a tool that can help them optimise how much money they spend on TV and when.”

He clarified that the data does not go down to an individual level because of GDPR concerns, but nevertheless is very powerful in terms of campaign optimisation.

A version of this article was originally published by our sister publication, Videonet.