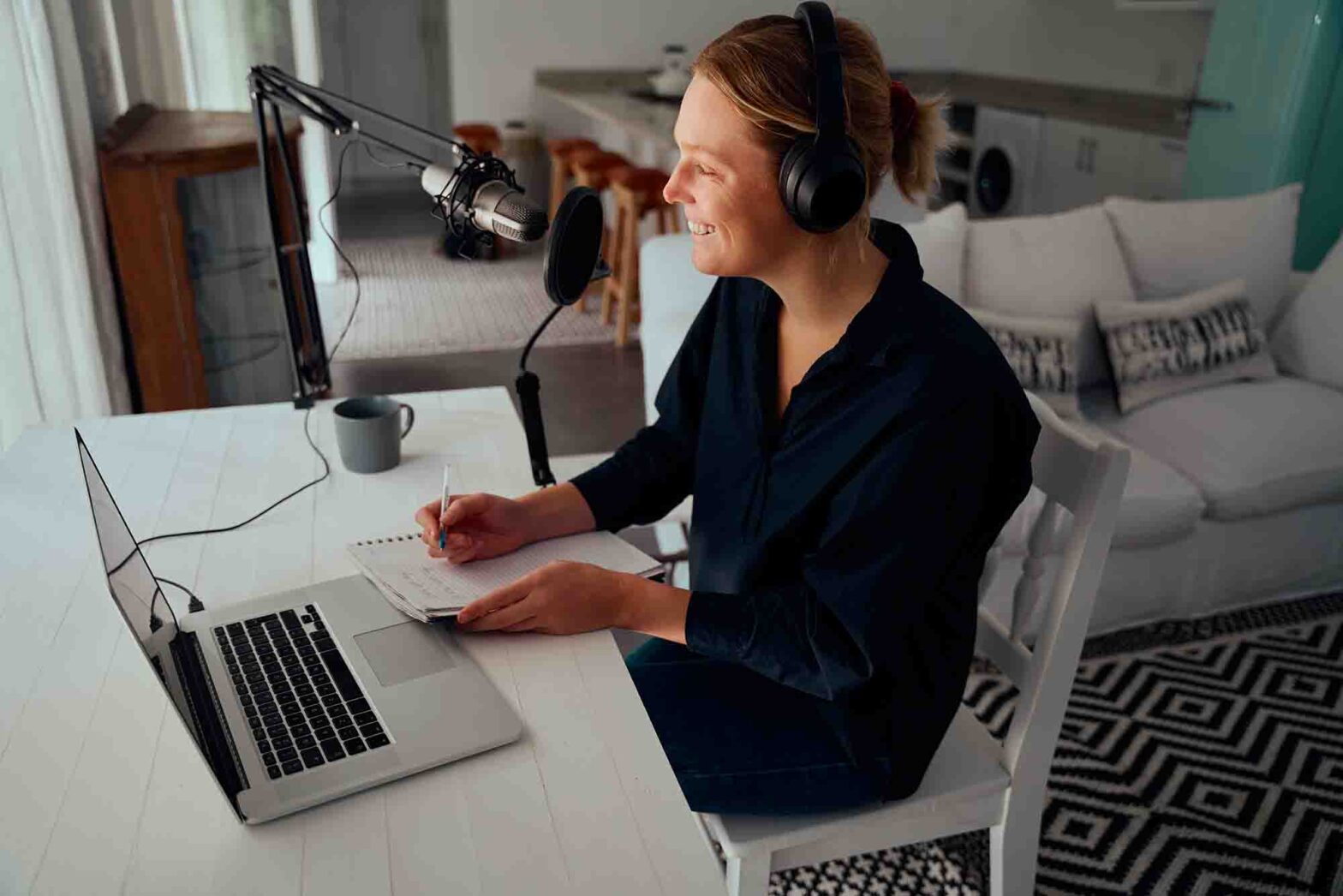 Traditional ad-buying models and measurement are not fit for purpose.

Podcasts are a strange product, in the grand scheme of media things.

For the most part, they are published ‘wherever’.  Apart from the rare ‘exclusives’, such as The Joe Rogan Experience (Spotify) or Idris Elba and his wife’s Coupledom show (Amazon-owned Audible), we’re generally talking about a product in which people just think of something to talk about, record a conversation, upload it to a hosting platform for a small fee, and publish it to a multitude of places.

Imagine if, instead of ITV having a free-to-air TV channel, it decided to create Love Island as a single content series that went out on YouTube, Snap, and any other video platform? As popular as Love Island is (or at least, used to be…) that’s a lot of pressure on a single show to keep attracting viewers. This is why media owners  have generally sold ads into a channel, a newspaper, or a magazine –  and why Krispy Kreme sneaks that awful Strawberries and Kreme donut into an otherwise perfect half-dozen box – a variety package is a more reliable product.

No wonder, then, that podcast advertising is extremely concentrated within the most popular shows. Last month Edison Research estimated that if advertisers simply bought ads on the 10 biggest podcasts, they should already reach a third of all podcast listeners in the US.

This is typical of what we’ve come to learn of pure-play internet media –  it’s a winner-takes-most economy in which you have to be extremely lucky and/or extremely talented to thrive. Because algorithms serve masses of people ‘popular’ content on a global scale, the total range of content served shrinks. As I discussed in a previous column, we are now seeing a significant decline in new music being consumed.

This is bad news for 99% of the world’s podcasts, of which there are probably about “more than 4 million” according to PodNews editor James Cridland, while half of podcast episodes have been downloaded fewer than 26 times. Inevitably, many of these 4 million podcasts will be ‘bad’ i.e. poorly produced passion projects or vanity exercises by inept normies who lack proper production skills. If you’re ever suffering from imposter syndrome, search for something really niche in Apple Podcasts and rejoice as your inferiority complex melts away to the sound of a thousand echoey ums.

But the beauty of podcasts as a medium is that layer in the middle of the so-called ‘long-tail’: the self-produced masterpieces that break into the mainstream or develop cult followings. The ones with hundreds, not thousands, of weekly listeners. This is the cohort of media publishers that this sector needs to get better at monetising, namely by enabling advertisers to buy groups of related podcasts, rather than continuing to trade on CPMs for individual shows.

I saw this first-hand when I hosted and produced the Campaign Podcast for Haymarket. It was a professionally-edited show with great guests and interesting content, but because of its niche subject matter (the ad industry), it has a natural audience limit. I always wondered: what if an advertiser were able to buy a bundle of similar-ish trade media podcasts? A variety package with a bigger aggregate audience.

This matters now in particular because, as I discussed in my last column, online advertising will play an even greater role in paying for media during this inflation crisis as subscriptions for Spotify, Disney+, Netflix, Apple Music, etc. either plateau or go into reverse.

Following that, we reported Kantar research that revealed over a third of the million British people who are cancelling music-streaming services say they are doing so to cut costs. Penetration rates of music streaming went down slightly in the UK in the first quarter of this year.

And yet free-to-air radio continues to grow in audience. The latest Rajar figures say that UK radio had its biggest ever audience (49.7 million) for the first three months of 2022. Commercial radio also recorded a record audience (37.2 million, which is 3.4 million more listeners that the BBC). And digital now makes up the vast majority (68%) of all radio listening.

Of course, there is no Rajar for podcasts, which is part of the problem –  there is not enough measurement to begin to sell the ‘long tail’ properly. Sure, the likes of Spotify and Acast have individual agreements with third-party measurement providers like Integral Ad Science and Nielsen, who will charge an advertiser or agency for some data.

A lack of comprehensive measurement also means advertisers are in the dark about general listening behaviours that would better inform their planning decisions. So, my colleagues at Mediatel Connected recently ran an exclusive Video & Voice survey with YouGov to see what a broad range of people say about podcasts.

For example, when do people recall hearing ads in podcasts? Click on the graphics if you want to enlarge them in your browser.

We then asked about opinions about the length of podcasts:

This is likely to be interpreted as encouraging – four in 10 people say the ads are too long, but six in 10 either don’t know or think they’re fine (3% of people apparently think they are too short – I wonder which industry they work in?)

Even more encouraging is that the vast majority of people who access advertising offers find it to be an easy process, suggesting that podcast advertising recall is high (and suggests that LTRs are high, too, given that offer codes are usually made at the end of ads):

Connected then asked YouGov to survey people on how much they listen to the top 10 most-listened to podcasts in the UK, which is an amalgam of top-10 lists publicised by Spotify and Apple Music, the two biggest podcast media owners.

Of course most people will not have listened to any of them, but the fact that 14% of people out of a random 2,000 person sample listen to That Peter Crouch Podcast is higher than I would’ve guessed. But it chimes with the Edison Research –  big podcasts are cutting through as mainstream media properties. Shame for UK advertisers that the former England footballer is hosting a BBC podcast with no ads. 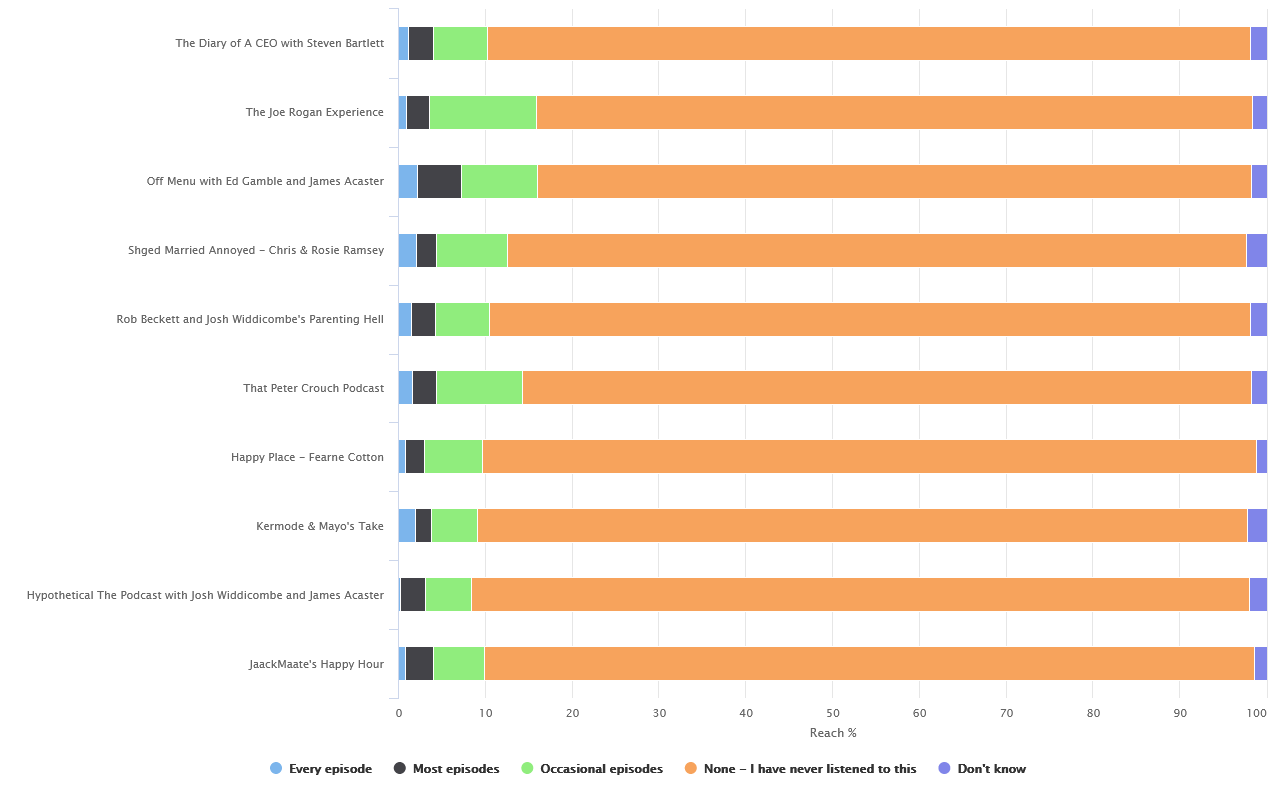 There is even more interesting survey data on Mediatel’s Connected platform (for subscribers).

This isn’t enough. I keep reading and hearing people in this industry talk about the growing importance of “contextual” advertising or the renaissance of “content” as targeting internet users with their data goes out of style. But what are media owners actually doing to make that content easier to buy en masse?

Much of the industry conversation last year was taken up by the advent of cross-platform measurement solutions, such as the Sky/ITV/Channel 4 UK joint venture CFlight or the ambitious cross-media measurement initiative Origin developed by advertiser trade body ISBA.

While a lot of our media ecosystem already has comprehensive measurement for audience for content and ads, those media were created in an age of mass broadcast media. Podcasts are a long-tail medium and it’s time for long-tail solutions to ensure its continued health.

Is personalised creative worth the added cost on audio?

Next Tuesday is our Future of Audio Europe event, where we invite the European audio community to come together in London for a full day of debate, discussion, networking, and celebration of everything audio.

I’ve invited a panel of wise heads to help answer whether all the advancements in tech that allow addressable creative on digital audio are actually worth it and how advertisers should make that decision.

Sound good? Check out the agenda and register here.