Performance planning: How to plan for a Christmas like no other 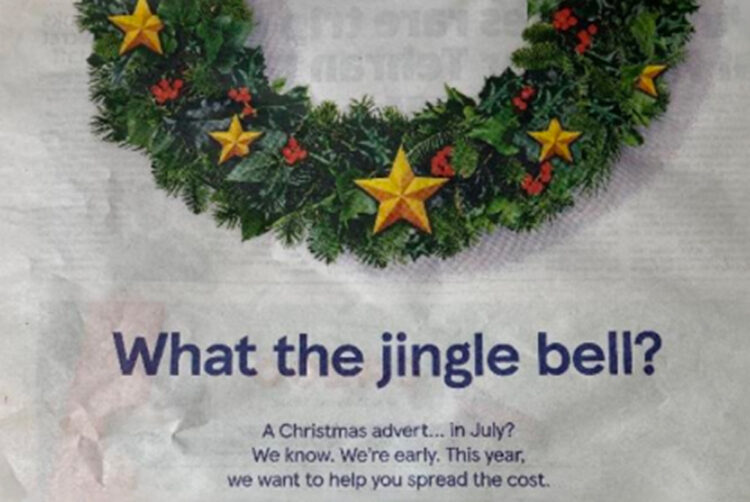 In the latest instalment of Niki Grant’s Performance Planning series, Alice Stapleton explains how being early and flexible is the key to planning media during a festive season with a cost-of-living crisis and a World Cup around the corner.

It’s barely September and we’re already up to our eyeballs in Christmas media planning; assessing the landscape, reviewing budgets, and figuring out how to ensure Q4 is a target-hitting, revenue-driving bumper season of marketing success.

If you think that sounds like a tall order then fear not. Our guest this month is one of The Kite Factory’s specialist digital planner buyers, Alice Stapleton, and in this instalment of Performance Planning we’ll be sharing how brands, both commercial and third sector, can tackle the festive environment in which they must thrive to round off 2022.

As we’re fast approaching Q4 it’s time for us to talk Christmas media planning. Q4 is often the golden quarter for brands to connect with engaged audiences, especially those more likely to spread their festive cheer by splashing their cash on gifts and seasonal charitable donations. This year however we’re entering a festive season like no other, bringing with it key planning considerations we simply can’t ignore.

The Cost of Living Crisis

It’s no surprise that the rising cost of energy bills and inflation surpassing 10% in the UK is set to have a huge impact on consumer behaviour during the festive period.

This means consumers will be more difficult to encourage through the conversion funnel, and older audiences with more disposable income will prove more competitive and (expensive) to reach.

Whether you love it or hate it this year the World Cup will be held in winter for the first time, from 21 November to the 18 December (yes, that’s just a week before Christmas!).

On top of the cost of living crisis, consumer spending will be spread thinly for those looking to celebrate the winter World Cup. Men and younger audiences are far more likely to agree that they are budgeting their spend more carefully this year to enjoy both Christmas and the World Cup (IPA).

Undoubtedly the increased noise in the market what with Christmas and the World Cup will lead to a much more competitive festive advertising space than ever before. Last year saw record breaking social CPM rises which are set to continue this year and is likely to be amplified even further by World Cup advertising.

Since a winter World Cup is something nobody has experienced before, there are many unknowns as to how much it will impact consumer behaviours and advertising during the festive season.

To combat rising inflation and to allow consumers to spread the cost of Christmas, gift shopping is set to begin earlier than ever this year.

Last year 16% of UK consumers shopped for Christmas as early as August and more than half of our festive shopping was tackled in October and November (Sensomatic Solutions).

Priming audiences early on will be key to strategic paid media plans this year more than ever.

How to flex your Christmas advertising campaigns accordingly

Read the Room; Use Empathetic Messaging

Everybody is (or should be!) hyper-aware of the rising cost of living and the impact it will continue to have on millions of households. Creative messaging that ignores this will likely alienate your audience, and diminish advocacy for your brand.

Tesco’s recent print ad in Metro (pictured, left) is a great example of empathetic Christmas messaging that recognises people’s likely economic situations, and finds a way to harness an opportunity out of it. The ad highlights their Clubcard Christmas savers scheme that allows shoppers to save vouchers throughout the year that can then be used towards to cost of their Christmas shop.

And it’s not just commercial brands that need to consider the environment in which we’re working. For charities, moulding messaging to different audiences will be key to engaging and inspiring would-be donors. We know that younger audiences will be affected by the cost of living more heavily than older demographics and so may be less likely to respond to direct response messaging. Messaging needs to spotlight why the charity needs support now more than ever, and highlight the tangibility in what a donation can provide.

Due to the cost of living, 66% of people will have to make cutbacks this Christmas; a potentially bleak outlook for charities relying on festive giving. One way charities can address this inevitable consumer behaviour within the current climate is by using virtual charity gifting. For example, allowing people to donate money to a charity on behalf of someone else by way of a gift. This will allow consumers to kill two birds with one stone, maintaining charitable support and buying gifts for loved ones, even if money is tight this festive season.

Don’t be afraid to move to Plan B

An abundance of contextual market considerations makes Christmas 2022 more unpredictable than ever before. This makes flexibility and contingency planning an important component of this year’s Q4 media planning.

Opting for digital versions of linear buying methods, such as connected TV, digital out of home or digital audio, will give brands more control and flexibility over flight dates and investment; a valuable asset during turbulent times.

We all know that it’s hard to accept that something you spent months planning just isn’t working. This festive season we need to be reactive to what the results are telling us and ‘fail fast’. If a campaign isn’t hitting KPIs as it normally would in the past, we can’t be afraid to change tact and move to plan B.

Christmas media campaigns are often so heavily focussed on in-quarter ROI that it’s easy to lose sight of the important role that brand building can play at this time.

In Mark Ritson’s recession playbook, he emphasises the importance of maintaining brand adspend throughout a recession so that brands can flourish afterwards. “You maintain the long of it because its impact is delayed but substantial, and it will kick in exactly when you need it as the recession ends”.

Even if consumers are tightening belts this year, that doesn’t mean they won’t notice or engage with your brand. Don’t disregard those target audiences who are likely to convert this year; they can still be valuable advocates for your brand. Engaging them now may reap rewards in the future.

With the impending phasing out of third-party cookies on the horizon, first-party data will be one of the most important assets for a brand. Using lead generation tactics for those audiences less able to convert to a monetary ask will allow you to continue building a relationship with them until they’re in a better position to splash the cash.

So there you have it; Christmas may be looking a little different this year, especially when it’s taking place alongside a cost of living crisis, and one of the world’s largest sporting events. By establishing brand presence early on, and maintaining flexibility throughout this festive season, you could find this Q4 to be much more like The Holiday than The Nightmare Before Christmas.

Niki Grant is search director at The Kite Factory. Check out her previous instalments of Performance Planning, a guide for marketers and media planners to handle performance media planning and budget optimisation and her other columns for The Media Leader.