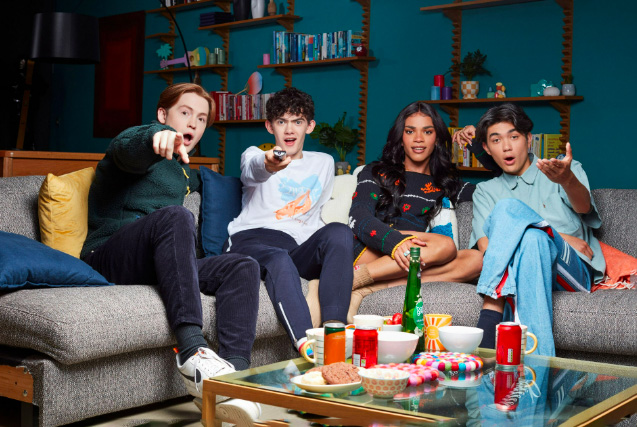 Mindless TV generates conversation and social needs, but what does this kind of viewing mean for attention?

People love watching people on TV. Key forms of entertainment consist of this structure whether that be a theatre show, a comedy gig or watching TV after a long day. As simple as this sounds, TV content such as reality TV and Gogglebox (where audiences are literally watching people watch TV) have proven these formats are consistently popular and successful.

Whilst we could argue such programming isn’t mentally engaging, ‘Mindless TV’ is in itself its own genre, and its popularity influences social norms and culture. Since the popularisation of the TV after the 1950s, 27 million households own a TV which is nearly half of the population meaning that the TV forms a key social point for conversation and discussion.

When considering how many video minutes we consume per day this is at five hours and 16 minutes for the average individual and 63.7% of this is dominated by Broadcaster TV. 13% of these minutes are secondly dominated by YouTube, which provides a more fast paced and changeable viewing experience. If two hours or our day consists of viewing across alternative video platforms which are typically less impactful, we can then assume the Big Screen is saved for a more social experience.

Not all TV attention is equal

When thinking about brain capacity in relation to the types of content and how much content audiences consume, it would be fair to say that most content we watch is typically mindless a feature film or a true crime documentary. TV stations are clever with how they position their TV scheduling – placing upmarket dramas like ‘Line of Duty’ on Sunday night at 9pm versus showing everyday gameshows like The Chase across daytime viewing hours.

Whilst TV is so heavily used, it’s important to think about how different programming draws different types of attention. Loose Women on ITV1 mornings could be viewed whilst the viewer is multi-tasking. Whereas programmes that have exclusivity to being aired one night per week are perceived as ‘unmissable, appointment to view’ and core to conversation points in the TV space.

Programmes like Love Island and I’m a Celebrity… Get Me Out of Here! bring in millions of viewers every night because as a society we have a social need to be in the loop of the latest media zeitgeist. However, this brings us to the idea that popular TV tends to be more mindless and in simple terms ‘we are just people watching people.’

Reality TV can be described as mindless due to the fact audiences are observing a media representation of ‘every day like’ people through the framing that these individuals are a part of normal society. Unfortunately, it is evident that Love Island’s representation of the young population favours Instagram models, fast fashion and upholds unrealistic beauty standards.

Why Gogglebox is different

However, content like Gogglebox is a fairer representation of the UK with a range of age groups, locations, and social classes. It is worth noting Gogglebox has received backlash from lack of Scottish representation, showing the first Scottish couple in six years only this year meaning true inclusivity is a struggle even for diversity championing sales houses like Channel 4.

The success in Gogglebox largely relies upon the relatability and the comfort of seeing yourself in TV personalities. In George Gerbner’s Cultivation Theory: It suggests that ‘people who are regularly exposed to media for long periods of time are more likely to perceive the world’s social realities as they are presented by the media they consume, which in turn affects their attitudes and behaviours.’

This would help explain why some audiences accept the values presented by Love Island as we are overexposed to an unrealistic beauty standard and obsession with love, dating and appearance. In more recent years, there has been an attempt by Love Island producers to overturn the rigid standards through ditching fast fashion sponsors in exchange for re-selling site eBay’s sponsorship deal and selecting a more diverse and inclusive panel of contestants. In 2021 Hugo Hammond was the first contestant on the show was a visible disability — a progressive first step for Love Island.

On the other hand, we can argue audiences aren’t consuming ‘Mindless content’ as they are actively ‘Prosumers’ (producing and consuming content.) Stuart Hall’s reception theory states that audiences not only consume media but produce media as they react to content within the media. A key example of this is Twitter being a live forum for Love Island conversation. It’s no surprise that Love Island is trending on Twitter with a rise in tweets each night from 9pm.

The idea that conversation is sparked from programming argues against audiences being passive. Gogglebox was another show generating conversation especially during Lockdown where audiences were looking for comfort and less hard-hitting content mostly within a co-viewing setting. Viewing peaked for Gogglebox in March 2021 shortly after lockdown was introduced, with the show reaching a record-breaking 6.8 million individuals. TV provides a sense of community where audiences feel a part of something.

We very much like to be involved in what’s popular — especially for shows which generate such great volume of conversation in the office or online. Traditionally audiences would venture to the cinema with family and friends when TV’s weren’t in the home as standard to watch the latest films.

Now that TV is more accessible and dominant within the home we see TV form part of people’s social routines as they tune in every night to watch programmes like Love Island and engage socially with those co viewing or through live Twitter feeds. One of Thinkbox’s seven TV needs states that 16% of our viewing time is dedicated to ‘comfort’ which is identified as a ‘the need for shared/ family couple time, which tends to be served by familiar programmes and viewing routines.’

This social need explains why formats like Gogglebox and Love Island are successful as their regularity provides a sense of comfort as we know what to expect and the programmes simplicity makes it an easy co-viewing experience.

Across the TV space we have seen TV stations mimicking the Gogglebox format with Comedy Central releasing ‘Channel Hoping With Jon Richardson.’ Within a gameshow setting where the panel discusses what they have watched each week, this follows a similar structure to ‘Richard Howard’s Good News’ or even ‘Harry Hill’s TV Burp.’ Seeing comedians funny twist on the weekly news and TV makes a great addition to the TV schedule. Comedic narrative on top of TV content can turn something from being mindless to something drawing greater attention. Different viewing habits and preferences can also largely influence whether content is seen as ‘mindless’ or not.

Whilst programming being seen as ‘mindless’ is subjective, mindless TV generates conversation and social needs. This content does not require intense focus as the experience is more about the social exchange we receive.

Audiences require this content for comfort and these formats performing well on TV will cause more production of similar shows — Love Island has recently announced they may be releasing a Mum’s and Dad’s version of the dating series.

Whilst the need for comfort dominates 16% of viewing time, the need to ‘Unwind’ dominates 26% of time and 15% is attributed to the need to be distracted.

TV provides different needs to suit its large audience appeal and it is therefore necessary that content is as varied and diverse as its viewers.