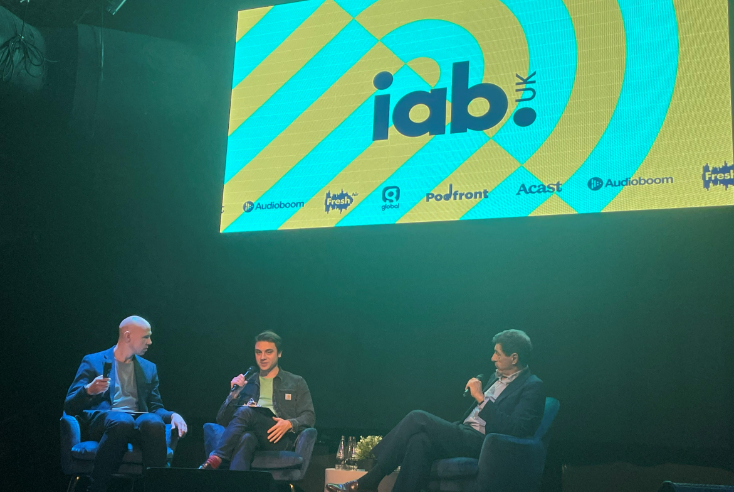 James Chandler, chief marketing officer at the IAB, boldly told the audience at London’s Steel Yard: “Podcasting is not an emerging channel, it has emerged.”

Several stats to support this were peppered throughout the event, including IAB’s adspend figures showing investment in podcasts had increased 61% from 2020 to 2021, and before that it had gone up by 43% between 2019 and 2020.

Attention and engagement with podcasts were frequently discussed. The average listening time to a podcast is 26 minutes, and another study found 60% of respondents said they were more engaged with podcast ads than any other medium. In podcast advertising, there are three to four ads per hour compared to 18 to 20 in radio.

Rajar Midas summer 2022 data found 93% of people listened to podcasts alone, 70% listened to mostly all podcast episodes that they download, and 68% of podcast listeners listen to whole episodes.

Nearly half (48%) of podcast listening took place in the home, with the remainder made up by 19% on public transport or walking, 16% in place of work or study, 14% in the car and, elsewhere 3%.

Amazon, Acast, YouTube, and Global were among the companies featured at the event with key information for advertisers and media-buyers.

Advertisers and agencies will be able to access podcast buying on Amazon with a new self-service programmatic tool.

It is launching this week in beta for existing clients, and will be made available to new clients soon.

Gina Kim, senior product manager for podcasts at Amazon said the tool will provide “a single point of entry” to make podcast buying “simpler and smarter”.

Wondery, which is part of Amazon, will also be launching a content team in London.

Acast is also working on a sentiment targeting tool that will complement its current contextual targeting tools, including conversational key word targeting which launched earlier this year.

Using these tools advertisers will be able to target their ads to the type of content in a podcast rather than the audience.

Audioboom’s vice president of content and product Mike Newman (pictured, below) said YouTube was the third largest podcast platform globally, and that many podcasters were becoming “platform agnostic”.

A survey highlighted by Audioboom found 50% of respondents had tried listening to podcasts on YouTube and 20% had preferred it.

The way to measure podcast engagement and listening is yet to be standardised.

Many podcast publishers measure downloads and listen-through rates, but Audioboom has introduced “retention” as a metric, indicating the percentage of total listeners who once they hit play on an episode, make it to the end of the episode. 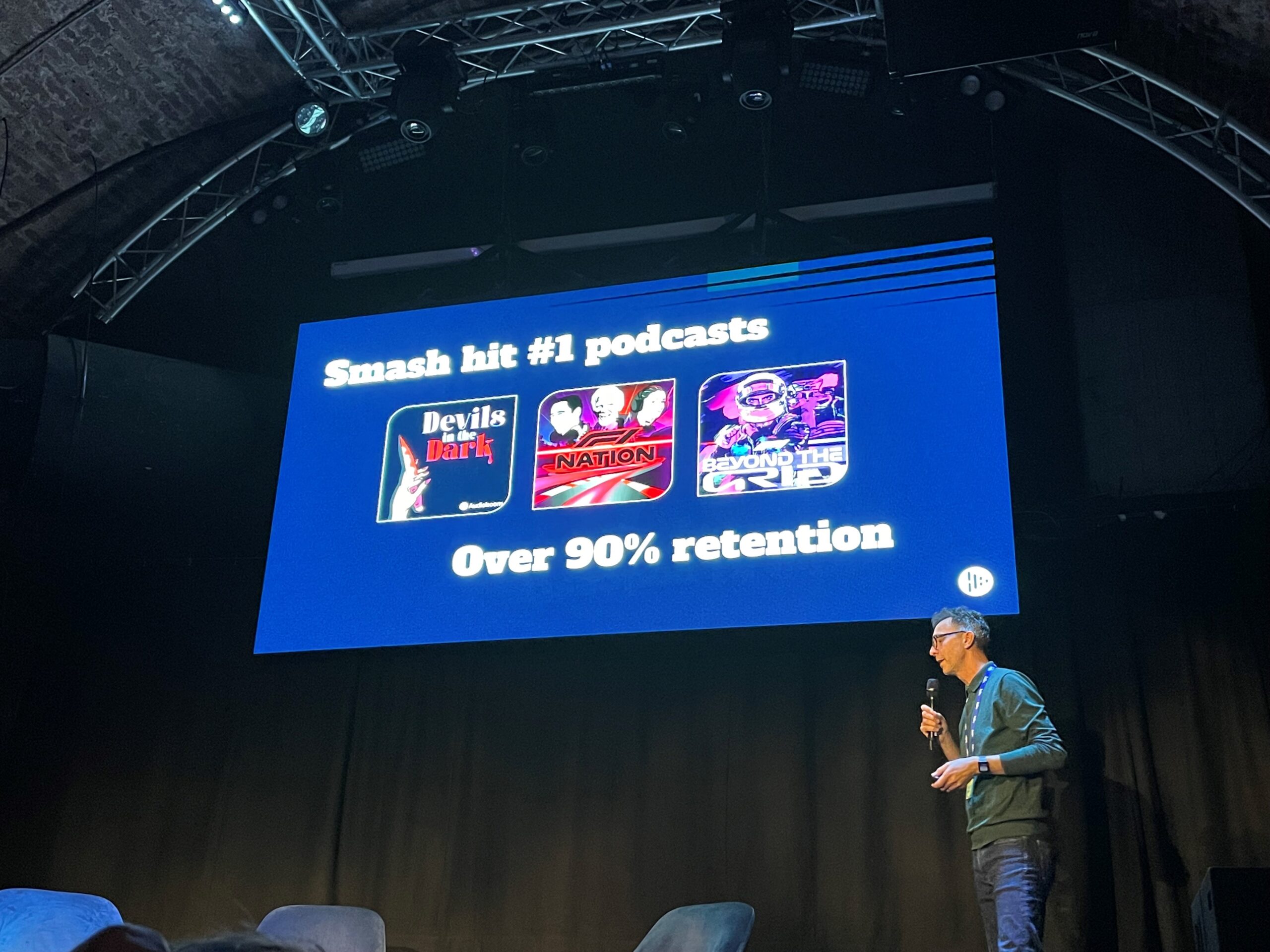 For example, Newman highlighted Audioboom podcast No Such Thing As A Fish has more than 400 million listeners, and a retention rate of more than 85%. Meanwhile Devils in the Dark, F1 Nation and Beyond the Grid all have a retention rate higher than 90%. All of these figures are based on Spotify for Podcasters Dashboard and Apple Connect.

Newman also said that advertising on a sports podcast, using examples of F1 Nation and Beyond the Grid, was “a really cost-effective way” for advertisers to align with and reach an engaged F1 fan base rather than sponsoring the sport directly.

Pod Save the UK coming soon

Crooked Media’s Pod Save America and Pod Save the World will be launching Pod Save the UK later this year, fronted by comedian Nish Kumar.

This will be on the Podfront platform, which is a joint venture between Stitcher and Wondery (part of Amazon).

Build your own, rather than rent podcast space

Another option for brands to explore is launching their own podcasts rather than buying podcast spots or host reads.

News podcasts proven to be ‘habit-forming’

Current affairs and news podcasts are traditionally not as sought after by advertisers as entertainment and comedy podcasts.

However, Mike Wooller, head of podcast partnerships at Global, and Sarah Ray, head of podcast sales (pictured, below), presented top line findings from commissioned research in to how consumers access news content and argued how current affairs podcasting could be as popular as entertainment, and more “habit-forming”. 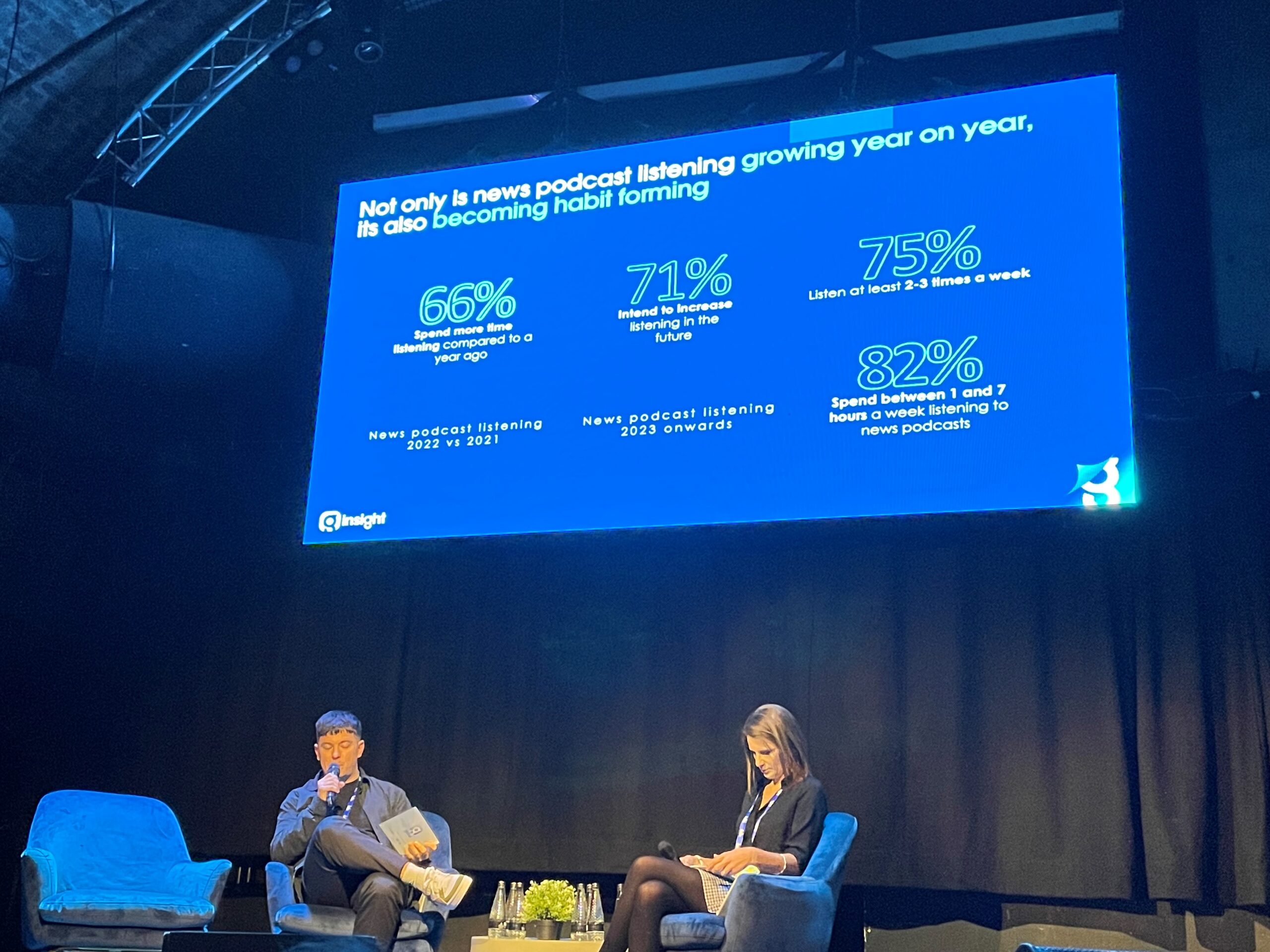 The survey found 61% of respondents thought news podcasts were trustworthy, 58% found them informative, 55% described them as reliable, and 71% said it was important to understand the implications and context of news.

News podcast listening is growing year-on-year and is also habit-forming, the study found, as two thirds spend more time listening to current affairs podcasts compared to a year ago, three quarters listen at least two to three times a week and 82% spend between one and seven hours a week listening to news podcasts. nearly three quarters (71%) intend to increase their listening in the future.

Chris Lander and Vicky Etchells have also joined the Global podcast team as head of comedy and entertainment podcasts, and head of news and factual podcasts respectively. They will be in charge of commissioning podcasts at Global.