Marketing budgets are coming under increased scrutiny amid downturn 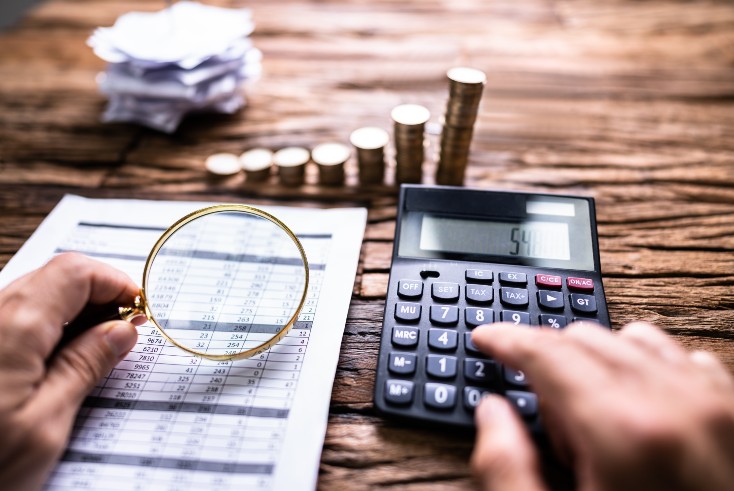 Marketing and advertising budgets are coming under increased pressure and scrutiny from finance directors as the volatile macroeconomic environment has thrown businesses for a loop.

However, according to the most recent study from the World Federation of Advertisers (WFA) and Ebiquity, some of the world’s biggest brands are committed to maintaining planned advertising investment despite the threat of recession in some of the world’s largest markets.

Nearly a third (29%) of companies surveyed plan to decrease their adspend in 2023, with the same proportion claiming they will invest more next year. Four in 10, meanwhile, intend to maintain their budgets at 2022 levels. 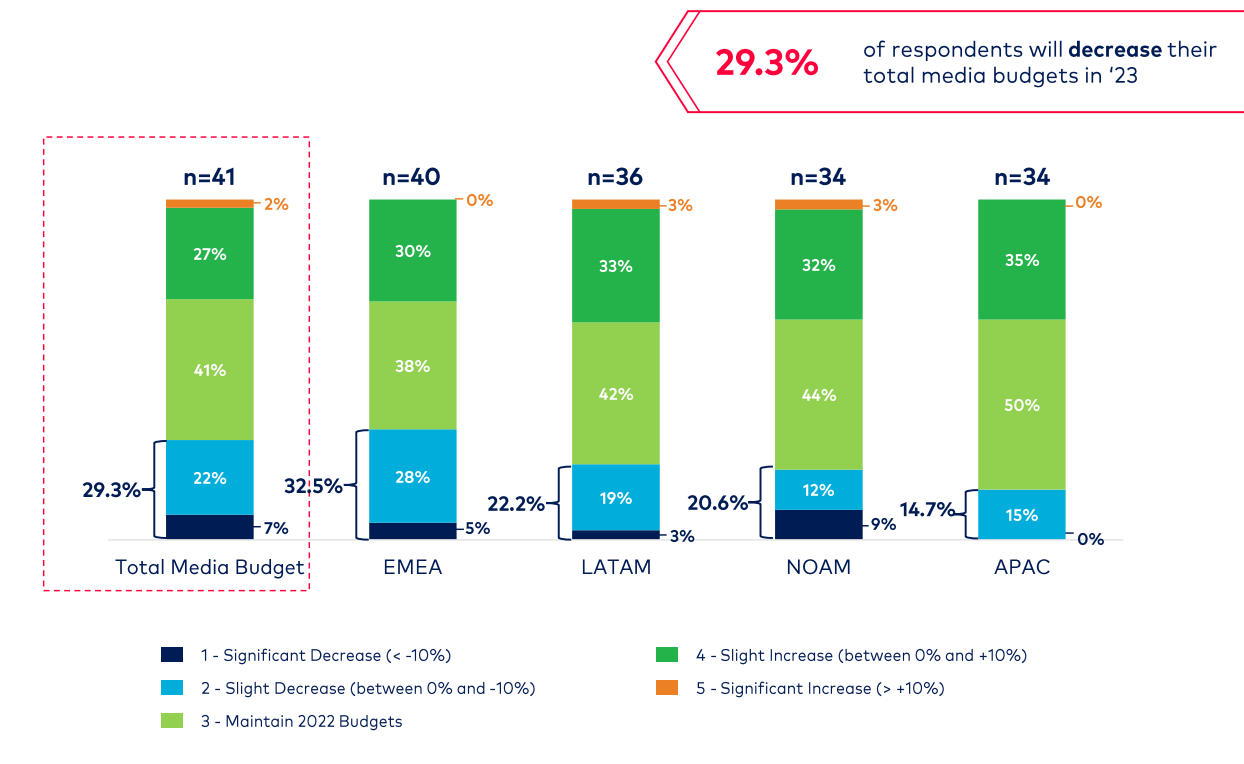 Breaking down the results by geographic region, there appears to be greater evidence of a potential cut in spending in EMEA (32.5%) than elsewhere (19.2% average among LATAM, NOAM, and APAC).

Three quarters (74%) of those surveyed “agreed” or “agreed strongly” that 2023 budgets are under increased scrutiny due to the recessionary macroeconomic environment, requiring marketers to justify their investment. 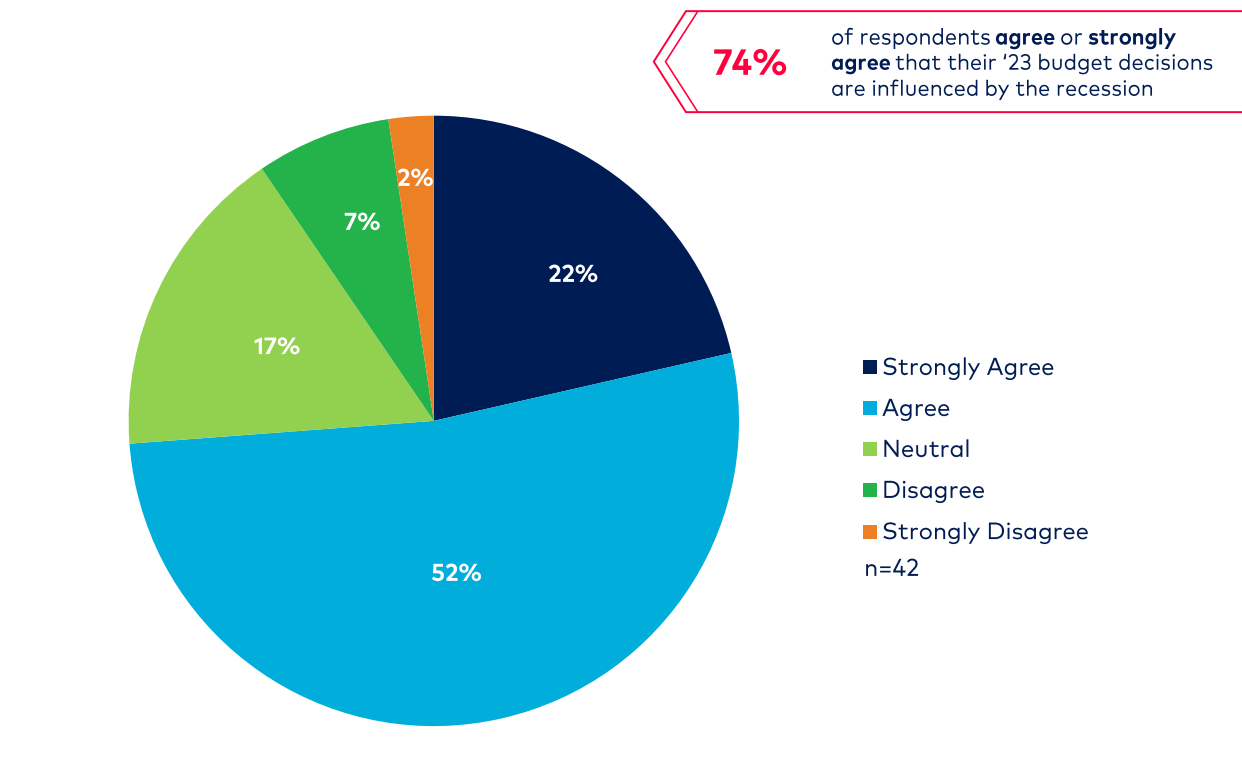 “2023 media budgets are hit hard by the recessionary climate, much more so than previously estimated by analysts,” said Ebiquity CEO Nick Waters. “As brands will aim to achieve more with less, we increase our efforts to drive smart savings by cutting ineffective and wasteful spend first.”

The research suggests that there is a change in behavior occurring in the way that money will be allocated next year, with the implication being that there will be a greater emphasis on short-term, performance marketing. 28% of respondents say they will seek to boost performance, compared to 21% who are focused on increasing brand spend.

Waters added: “Sustaining investment is one thing, but there is a risk to long-term brand health by over-investing at the bottom of the purchase funnel. It is a natural instinct to want to see immediate results from media investment but the longer-term trade off needs to be weighed carefully. It becomes more expensive to re-build brand credentials once they have slipped.”

Over four in 10 (42%) say they will increase spend either slightly or significantly in digital, while traditional media such as TV, radio, print, and outdoor are more likely to lose out just as they have begun to holistically recover from pandemic lockdowns. Nearly half of respondents are planning to cut their offline investment, and a quarter are looking to make a significant cut (>10%) in print spend. 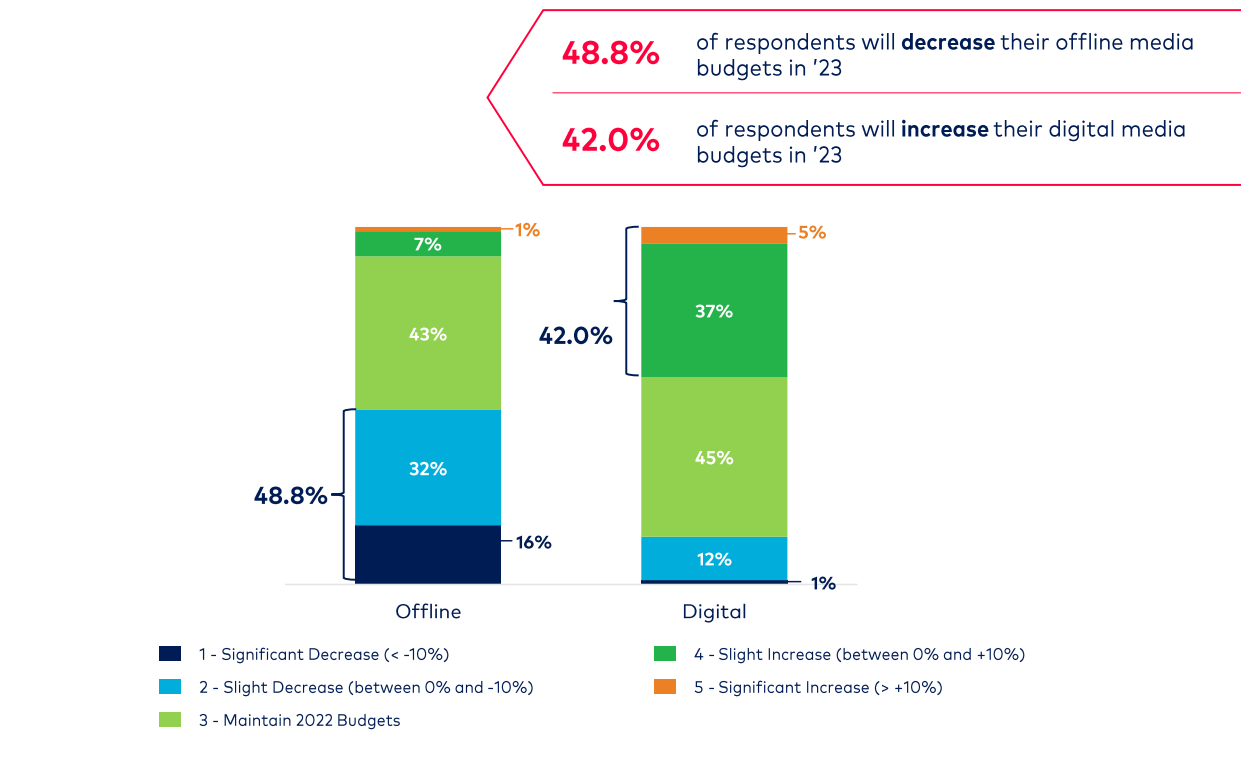 In addition, the study finds a move toward more flexibility in investment; namely, a greater use of biddable/auction-based platforms, particularly on digital channels, which allows brands to hold back funds, should economic conditions dictate. Fewer than one in 10 respondents (9%) are planning to increase the proportion of budget allocated to upfront commitments, in comparison.

“These WFA and Ebiquity survey results show that budgets are under pressure and there are signs of retrenchment into short-term performance channels at the expense of brand building,” said WFA CEO Stephan Loerke. “But it is encouraging to see that a number of clients are planning on standing firm, and taking heed of the well-taught lessons which show that those who emerge from recession stronger are those that continue or increase ad spending.”

The WFA and Ebiquity study assessed the intentions of 43 multinational companies, with a sample of respondents including representatives from five of the world’s top 10 advertisers by spend, which collectively invest more than $44bn in advertising.