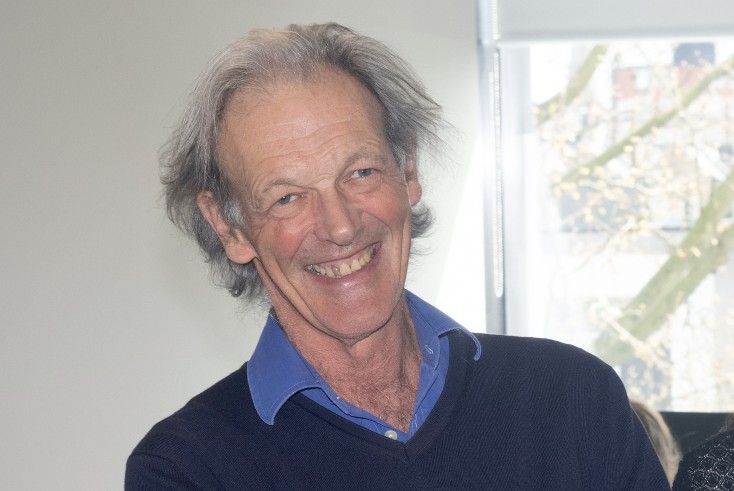 Jon Connell, founder of The Week, speaks to The Media Leader about his start-up newsletter publication, the editorial strategy behind creating a news digest, and why audience growth always takes precedence.

Since the pandemic, email newsletters have had something of a renaissance in volume and interest.

Websites like Substack have grown in popularity, offering anyone the ability to start and monetise their own newsletter, and many individual journalists, like former Vox editor Aaron Rupar and former Rolling Stone editor Matt Taibbi, have seen great success on the platform. Meanwhile, major digital and print outlets have doubled down on their newsletter offerings. The Media Leader itself runs a daily newsletter serving the UK media industry.

Given that there are over four billion global email users, it shouldn’t necessarily be a surprise that publishers see potential, especially as print circulations continue to erode. Advertisers may well follow; according to Statista, global email marketing revenue is expected to more than double from 2020 to reach nearly $18bn by 2027.

The increase in supply of newsletters however, has not yet necessarily translated to increased readership among all demographics. Just 9% of UK respondents to the Reuters Institute for the Study of Journalism’s 2022 Digital News Report said they regularly accessed the news via email newsletters. 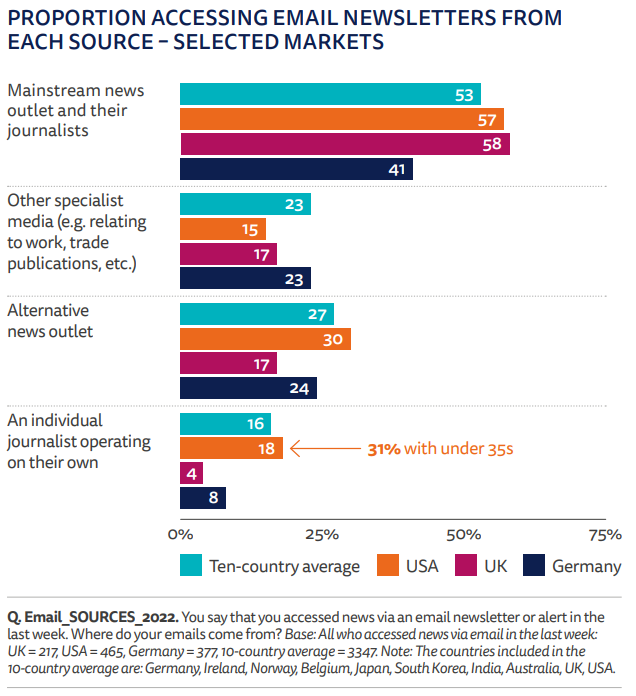 Younger readers were less likely than older readers to subscribe, instead preferring to access news via social media, mobile apps, or on the web. The Digital News Report found that 41% of 18-24 year-olds say social media is their main access point for news, compared to just 3% who say email.

This could mean that the medium is perhaps ill-suited to news. Alternatively, it could signal it is full of untapped potential, especially as younger demographics age and begin to use email more, be it for professional or personal reasons.

That is the bet that many news titles continue to make. Just last week, Reach announced that nine local news publications were adopting a “newsletter-first” strategy.

Newsletters are varied. They may offer original reporting, personal opinion or anecdote, or a digest of general or specific news coverage.

Digests have been a common format in newsletters for years (theSkimm, Morning Brew, and Radiocentre’s media industry Daily Press Summary are just a few examples), and they have become popular as news media has fragmented in the digital age. But during the pandemic, Jolyon “Jon” Connell, founder and former editor of The Week, saw a new opportunity in the format.

Enter The Knowledge, a daily newsletter that attempts to boil down an entire day’s worth of news and opinion into a package that can be read in five minutes or less.

‘You want something you can finish‘

Connell and his small team, which currently numbers seven, launched The Knowledge in late 2021.

Speaking to The Media Leader at his office, a prototypical start-up’s location in a converted warehouse in Kensington, Connell describes how his daughter had a hand in the newsletter’s foundation, as she pushed him to release a daily, rather than weekly, digest.

“Everything is speeded up,” says Connell. “People want to consume news on a daily basis, not a weekly basis.”

He adds: “It’s quite, in a way, similar to what I did at The Week because it’s still this idea that people are far too busy and everybody—newspapers in particular—go on and on and on, and you want something you can finish.”

Given that, as a digest, The Knowledge does not commission its own reporting or opinion, the ability for editors to pick the right stories to share is, essentially, the whole product. To do this, Connell and his editors often follow their instinct in looking for interesting stories that may not be widely circulated elsewhere.

“We’re looking for slightly surprising ideas, not just the predictable. Most people know all the gossip about Harry and Meghan—we don’t have to repeat all that.”

The editorial staff at The Knowledge are tasked with reading widely—not just newspapers, but also blogs, magazines, other newsletters, foreign sources and more—in order to pick out what’s most fascinating for their audience.

As Connell describes it, the challenge for the team is often less about choosing between the hundreds of different stories one could share, and more about finding the needle in the haystack. 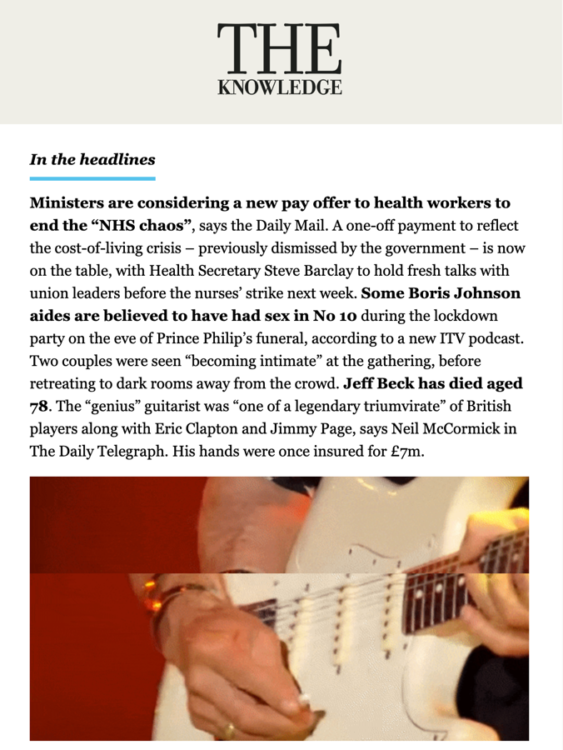 “Sometimes we’re really scrambling around even to find two [stories] that we really like,” says Connell.

He continues: “We’re not into news anyway, really. We’re more interested in the sort of ideas and thoughts around the big picture. What do you make about all of this? And not just politics, but obviously business and also personal stuff and historical stuff. We love the big philosophical ideas.”

‘Just as valuable as meditating or eating apples’

It is an editorial philosophy Connell developed while at The Week, which ran features like “Boring, but important” and “It must be true… I read it in the tabloids”.

The Knowledge’s own flairs of personality include its Snapshot section, where readers guess daily what a historical photograph is depicting, and a “Heroes and Villains” section in its weekend newsletter.

And Connell is more than willing to publish opinion pieces and views on subjects from across the political spectrum, telling The Media Leader that so long as a piece is sufficiently thought-provoking, factually accurate and not “mischievously mean about people without any purpose”, he will consider publishing it in The Knowledge.

The goal, he explains, is to take readers “out of their comfort zone and make them think again”.

“We’re not out to preach any message to you. […] We’re only out to tell you, Here this is really interesting, you should pay attention to this because these are things which will enhance your life and enable you to be a better conversationalist and therefore a more interesting person. And it’s only five minutes a day, and it’s just as valuable as meditating or eating apples.”

Connell posits that, apart from being a digest, his editorial ethos is distinct from major news publishers.

He recalls from his time at The Telegraph that then-editor Max Hastings often struggled with “feeling that he had to run pieces which he didn’t want to run, because obviously the tabloids were all running [them] and so you slightly feel you have to follow suit”.

Following suit is not what a start-up like The Knowledge is after. To stand out from competitors in an increasingly crowded format, they have not only had to pursue a unique editorial position, but also reach a target demographic which may be naturally news-averse.

As opposed to digests such as theSkimm, which primarily targets younger women, Connell’s prototypical Knowledge reader is likely in their early-30s (if not younger) who lives a “crowded, hectic” life and who are therefore not able or not desiring of spending a lot of time with the news each day, but still “want somebody who they can think of as a sort of intelligent conversationalist whispering in their ear.”

In targeting a younger demographic, Connell challenges his team to think and write more globally.

Though the newsletter is tailored to a British audience, he has found that young people are “more global in their thinking”, and has suited coverage to reflect that interest. Connell, who spent four years in Washington DC with The Telegraph, would not rule out some day creating a US or other foreign product, though he notes any such expansion would need to include a distinct offering. 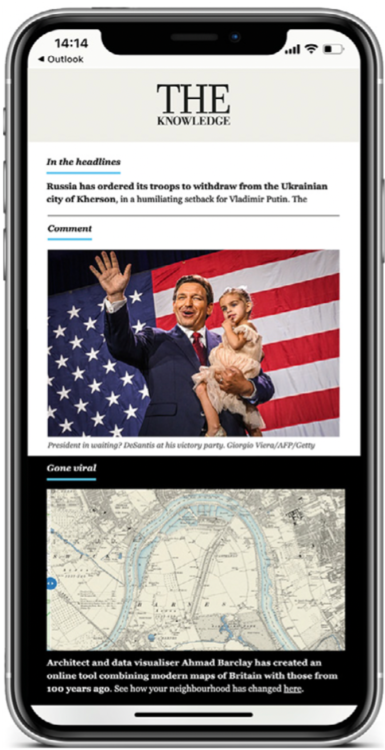 In its first full year as a UK-focused product, however, The Knowledge saw subscriber numbers lift from 5,000 to over 73,000.

Connell describes the readership growth as a success, and while his initial business strategy was to focus on simply building a large audience with quality content, the next step is figuring out how best to monetise their readership.

The newsletter is currently offered free of charge—”no one under 40 pays for news,” says Connell—and it will remain that way for the time being as The Knowledge seeks out arrangements with advertisers or sponsors.

David Weeks, who collaborated with Connell as executive director of The Week, is leading the effort, and is currently on the hunt for partnerships that may serve as a good fit for the newsletter’s branding, content, and—according to Connell—upmarket readership.

Though advertising is not always warmly received by readers (particularly those that already pay a subscription) Connell insists that, for now, locking their content behind a paywall would only deprive The Knowledge of potential readership growth in its early stage.

“You know, you can’t win them all. You’re getting this free, mate, so it’s a small price to pay to see a small [advertisement] popping up at the top and maybe one at the bottom; that’s not really going to ruin your day. Would you rather be forking out a hundred quid a year on this? Probably not,” he says.

‘A modern way of communicating’

What does the future look like for The Knowledge? For Connell, 2023 will be about continuing to grow readership, which he hopes to double to in excess of 140,000, while beginning to bring in revenue.

Regardless, he is confident that email newsletters are here to stay. After working in newspapers and magazines for decades, he believes that the decline of print is an opportunity for new forms of news delivery, and newsletters appear to fit the bill.

“Newspapers are great, but newspapers as everyone knows are slightly in decline, and not a modern way of communicating.”