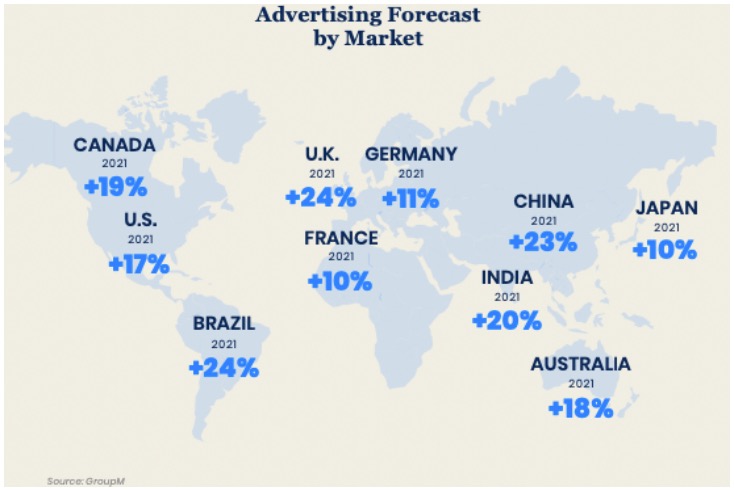 Global advertising will soar past pre-pandemic levels this year, GroupM’s mid-year forecast has found, driven by a surge in new companies building their businesses on digital media.

The WPP media agency group now expects global advertising to grow by 19% (excluding US political advertising) this year – up from its previous estimate in December of 12% for 2021.

This represents a level of ad revenue that is 15% higher than 2019, GroupM said, after 2020 experienced a 3.5% decline as the world economy was rocket by the Covid-19 pandemic. 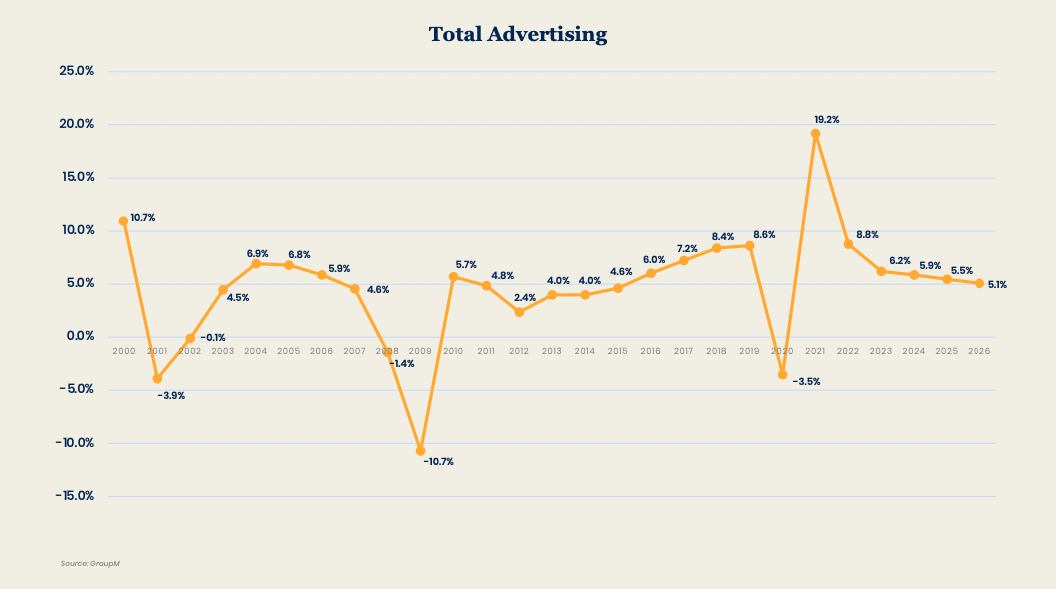 Key among the factors for the stronger-than-expected return to growth this year has been the formation of small and medium sized businesses that intend to grow using digital platforms, GroupM has found.

“We think that rapid gowth in the formation of new small businesses—perhaps enabled by entrepreneurs realizing they could build new ventures from home without incurring real estate costs— was also likely a factor,” the report says. “We can hypothesise that many of them substituted spending on digital media inventory in place of spending on physical storefronts.”

Spend is also being driven by performance marketers who are “massively” increasing their spending on digital media, particularly those that build their businesses around their apps or are dependent on digital services such as mobile gaming.

The report explained: “This activity has been catalysed by changes in consumer behavior during the pandemic, by easy or ready access to capital and by public securities markets looking to reward rapid top-line growth over enhanced profitability.

“We can point to dozens of companies that capture these trends, and each spends hundreds of millions or billions of dollars on advertising every year.”

TV is forecast to grow by 9.3% this year, with “low single-digit growth” expected in 2022 and beyond.

However, TV’s reach advantage is set to erode at a “relatively rapid pace”, the report warned, due to competition from ad-free streaming services.

“By spending billions of dollars on content annually, Netflix, Disney, Amazon and Apple have already established a presence in almost every major market on Earth. AT&T’s Warner Media—prospectively set to combine with Discovery Communications—and ViacomCBS have announced plans to do the same. Comcast [owner of Sky and NBCUniversal] will likely further expand its global footprint before long as well.”

Netflix, in particular, will double its revenue and audience share in Europe if it continues to benefit from a linear relationship between spending on content and share of viewing.

“With all the other services similarly expanding in Europe, unless the region’s incumbents greatly increase their spending on content, viewing shares will similarly shift toward streaming offerings. The consequence of all of this is that consumers will increasingly view content in streaming environments. This is a net-negative for marketers because a growing share of that content will almost certainly remain ad-free.”

This is despite newer forms of audio, such as podcasting and streaming radio, providing some “sizzle” to the medium, it said.

“Beyond perceptions of podcasting as an appealing format, the sector is improving its commercial potential. Large traditional broadcasters are licensing or acquiring growing numbers of third-party or independent producers or packagers of podcasts along with related technologies.”

Print will continue to decline: newspapers down by 0.6% in 2021 and then by an average of 3.5% over the following five years. Magazines will decline by 2.2% this year, with another 4.9% over the next five years.

“Where publishers are investing in their properties, they will maintain a capacity for growth and an ability to add tremendous value to marketers’ advertising efforts. Unfortunately, in much of the industry, the opposite has been occurring over an extended period. Legislative efforts to empower publishers to negotiate collectively with Facebook and Google will help with publishers’ bottom lines, but it is unclear whether it will spur publishers to collectively invest more in their businesses.”

Out-of-home advertising will grow by 19% this year and then by a compound annual growth rate of 6.8% through to 2026.

“Longer-term, OOH is benefitting from growing interest in the medium and is aided by new digital formats that allow for incremental sources of demand to emerge. Better targeting, the capacity for real-time and/or programmatic buying and the increasing number of locations for digital signage are all positive factors.”

“We note a significant negative factor for the sector is the likelihood that film studios will prioritize content development for streaming services rather than for cinemas. This would have the effect of reducing audience levels and advertiser interest over time.”

There is also a greater market concentration in the ad industry, GroupM reports. In 2020, the top 25 media companies represented 67% of total ad revenue, compared to in 2016 when the same group of companies accounted for 42%. This is being driven by huge growth in the last five years of digital titans such as Google, Facebook, and Amazon.