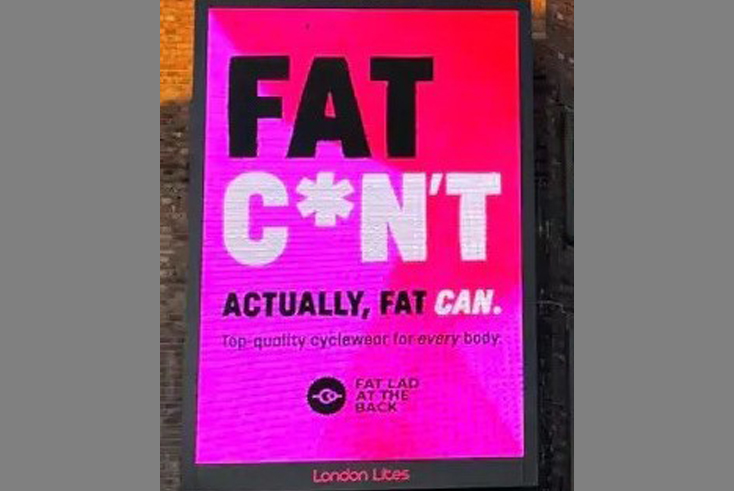 An outdoor advertising campaign featuring the words “Fat c*n’t” has been banned for causing offence and being placed in a location where it was likely to be viewed by children.

Cycling clothing company Fat Lad At The Back (FLAB)’s ad from July 2022 ran the copy “Fat c*n’t… actually, fat can” and prompted 11 complaints to the Advertising Standards Authority.

Some of the complainants said children were with them at the time and recognised the expletive, the ASA said. The UK’s advertising regulator ruled today the ad must not appear again in that form. FLAB was told to “take care to avoid causing serious or widespread offence in future, and to ensure their ads were appropriately targeted”.

When contacted about the ad, FLAB told the ASA that the ad had not been created to cause offence, but was part of a campaign designed to challenge negative societal views towards overweight and obese people exercising.

They believed that any potential mis-read of the wording “C*N’T” would have been quickly rectified by a viewer upon a second look, and the point of the campaign would then be made clear, especially when the phrase “fat CAN” was proximate.

The company also believed the ad was suitable for general outdoor advertising placement, because it did not expect that children who saw the ad would replace the missing letter with the letter “U”, therefore spelling the word “cunt”, but instead would assume that the asterisk represented the letter “A”.

London Lites, a specialist Central London outdoor company that owns the digital billboard, said that while they had been aware that the ad was “thought-provoking”, they did not believe that to be enough of a reason to ban it. The company said that they had discussed the ad internally and their staff had all believed that “C*N’T” had been intended to represent the word “can’t”, rather than the expletive the complainants had associated with it, due to the inclusion of the apostrophe.

However, the ASA ruled the ad was inappropriate for outdoor display because of its offensive content and placement.

It said: “[R]esearch had shown that words such as ‘cunt’ should not be used at all in marketing communications, unless very carefully targeted to an audience that was unlikely to be offended by them. The ads appeared on a digital billboard, which was an untargeted medium and was therefore likely to be seen by people of all ages, including children.

“A number of the complainants also identified that children they had been with at the time they saw the ad had speculated on the nature of the word featuring the asterisk symbol, with many understanding that it was intended to suggest an expletive.”